How to Banish Uneven Extractions
Step by Step

Make a funnel by cutting out the bottom of a yogurt container so that it wedges neatly in the top of your filter basket. This allows you to stir as vigorously as necessary without grounds spilling everywhere. If your grinder's clearance allows it, grind directly into the funnel/basket/portafilter combo until you have a slight mound of coffee grounds. Otherwise there are a couple of other options:

If you prefer, weigh the grounds first, but I like to dose strictly by volume. As usual, the grind setting should be adjusted to achieve a 25-30 second espresso pour. The pictures below summarize these first steps.

Stir the grounds in the funnel/filter basket with a needle. The stirring pattern does not seem particularly important. Some baristas prefer a circular pattern, whereas I simply stir vigorously back and forth. Any stirring pattern works, as long as it breaks up clumps and achieves a uniform distribution of coffee grounds throughout the filter basket.

The dose should be adjusted for optimal results with different coffees, grind settings, filter baskets, and brewing conditions. For a richer, more ristretto-like extraction, try packing a bit more coffee grounds in the filter basket. However, if the top of the puck touches the shower screen as you lock the portafilter into the group head, you have overdosed the basket. Contact between the puck and the shower screen before the shot may disturb the integrity of the puck and break the puck / filter basket adhesion, which leads to uneven extractions. If you feel resistance as you lock in, reduce the dose.

The WDT allows you to adjust the dose by volume in several ways:

With a little practice, dosing becomes quite easy. The key point to remember is consistency in the method you choose. The photos below summarize these steps.

Vigorous stirring fluffs up the grounds so that less coffee fits in the filter basket, and allows you to correct overdosing errors. To reduce the dose (downdose), stir the grounds and level with a straight edge without any downward compression. I like to sweep the grounds back and forth in an "X" pattern with the dissecting needle handle, but you can use a knife blade, ruler, or your finger.

To increase the dose (updose), tap downwards a couple of times on the counter before leveling. Alternatively, compress the grounds using Schomer's finger compression approach, Stockfleth's move, or the Chicago Chop as you level. The dissecting needle handle again makes a convenient tool when performing the Chicago Chop (named after the technique employed by the baristas at Intelligentsia Coffee). This downward "chop chop chop" motion across the top of the filter basket with the handle gently and uniformly compresses the grounds; follow the chopping motion with a quick level by sweeping back and forth.

Leveling the grounds provides a uniform surface for tamping, and makes dosing more dependable. Regardless of your technique (Schomer's, Stockfleths, Chicago Chop, straight edge), I recommend leveling to the top of the filter basket for greatest consistency in dosing.

When using this method for the first time, try a simple direct tamping style. Tamp once with medium pressure, with an emphasis on keeping the tamp centered and level. Brush off the basket rim and invert the portafilter briefly to discard any stray grounds. Then tamp firmly (using at least 30 pounds pressure) and finish with a no-pressure polishing twist. A convex tamper base is more forgiving in my hands, but some prefer a flat tamper base. The photos below summarize these steps.

Other tamp styles also work well (such as the Staub NSEW approach). In general, an even distribution permits any reasonable tamping style, whereas no tamp can cure an uneven distribution. Tamp styles that involve tapping the side of the portafilter, however, can disturb the integrity of the puck, and are not recommended.

Now it's time to lock in and pull your shot. If you're using a bottomless portafilter (highly recommended!), a uniform pattern of initial beads is indicative of a promising pull. Multiple streams should rapidly merge into a single, centered, beautifully tiger-striped stream of espresso goodness. Be sure to stop the pour at the first signs of blonding. Then sit back and enjoy your well-deserved reward!

Is the WDT right for you? 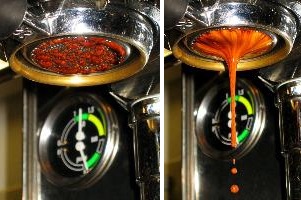 Although I believe the WDT can improve everyone's espresso pours, some will clearly benefit more than others from this technique. Stirring the grounds only affects dose and distribution, and will not cure problems associated with stale beans, poor grind, incorrect brew temperature, and so on. It is less likely to help those who:

People who will likely benefit most from the WDT include those who:

But even the experienced barista may find the WDT improves his/her pours. Below is a testimonial from Jon Rosenthal, master of the naked triple ristretto:

"John, I'd like to thank you for sharing your technique (and for sending me the 'WDT tool' dissection needles). I now use a needle to stir the basket on every shot and my consistency has definitely improved. This technique may not be sensible for a commercial setting, but in the world of the Home-Barista, this technique will surely help many people get better extractions."

And HB's own Dan Kehn comments "This is the best 'newbie cheat' that I've tried."

The WDT puts the focus on distribution, a critically important and oft-neglected part of espresso technique. Call it a crutch, call it a cheat, call it whatever you will, but I have not found anything else that approaches the consistency and flexibility of this approach. Give it a try and see for yourself. If possible, use a bottomless portafilter— it's one of the best available tools for diagnosing your pours. With good distribution, you will bang out one espressoporn-worthy shot after another.

But don't take my word for it. Examine the videos below and see for yourself.

Many thanks to Dan Kehn, Jon Rosenthal, and others for their encouragement, support, and willingness to try something new. And a special thanks to Mark Podolsky, who originally dubbed this method "the WDT." Below are a few of my favorite online references related to improving the quality of espresso extractions.

"It's tempting to blame an uneven extraction on an inconsistent tamp, but in the majority of cases, improper distribution is at fault... I prefer to overdose the basket slightly differently than the steps described by David Schomer. Instead of overdosing by compression strokes, I gently tap the portafilter on the grinder fork twice when the basket it about ¾ full, and then finishing filling. Finally I do four leveling drags South-North, North-South, West-East, and East-West without compression."

David Schomer updates his packing and distribution technique, reminding us that "...a master barista doing the dance of espresso preparation is beautiful to watch. A fluid packing technique is the heart of the whole thing and adds to the romance of this little thin sweet coffee prepared especially for you."


The pull will always start with separate drops appearing, ideally completely uniform across the whole basket surface. Spritzes show pinhole faults in the puck. They are far less serious than visibly uneven flow from the basket (i.e. flowing from one half but not the other) since they repair themselves. Nevertheless, they show the levelling was not perfect. The major change most people who were relatively painstaking make is not to tap, beat or knock the basket, especially after levelling and before tamping. The other major change is that tamping becomes far less important than levelling. You can get a perfect naked shot without tamping, providing the levelling was perfect; but no tamp on earth will save a poorly levelled basket."