Water analysis, treatment, and mineral recipes for optimum taste and equipment health.
← Back to Water

Here's a brew video where GH talks about a water recipe using mag and potassium bicarbonate..

Alkalinity seems pretty low relative to the rest of the recipes out there.
Top

Rachel Apple, Quality Control Manager for George Howell Coffee Company, has been kind enough to share with us the brew water recipe they use. Which is super simple, just mix together:

If you've made your own concentrates following our guide here, using these to mimic this recipe you'll need:

24.4g Mg concentrate
19.5g Buffer concentrate
956.1g DI water
Just divide all three figures by 4 if you'd like a smaller 250g amount of brew water. This isn't an exact replication of the George Howell recipe, but it's pretty close.

For Epsom salt, EddyQ's numbers would be right. But they say it's anhydrous, which has about twice the amount of magnesium sulfate per gram, so would be about 2 mmol/L , or 200 mg/L CaCO3 equivalent in hardness. It also would have over 190 mg/L sulfate. Fine for pourover but probably not a good idea for routine use in an espresso machine.

As she says in the video, this water is " ... a little bit outside of the spectrum ..." To see that in some context: 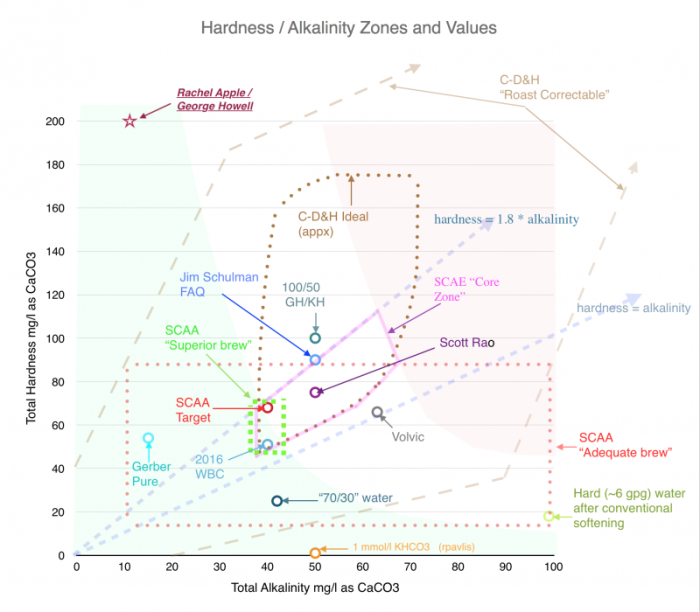 (The above graph was posted and discussed in: Good references on water treatment for coffee/espresso )

P.S.
If you want to give this a try and don't have a .01g scale, just make up concentrated solutions. And you can use Epsom salts, which is more available and probably more stable (the anhydrous would gain water weight after opening.) You need about twice as much Epsom as you would anhydrous to get the same magnesium sulfate.

What I'd do is add 5g of Epsom salt to 500 g of water. That would give me a 40 mmol/l concentrate. Then add 50 ml (~ 10 teaspoons) of that to each liter of brew water to hit the 2 mmol/L target that they are using.
For the bicarb I would add 2g of potassium bicarb to 500 g of water, giving me a 40 mmol/L concentrate. And add 5ml (~ 1 teaspoon) of that to each liter of the brew water to hit the 0.2 mmol/L that they are using.
Pat
nínádiishʼnahgo gohwééh náshdlį́į́h
Top

Well its very interesting and somewhat peculiar then!

Ill probably just stick with my normal recipes closer to 100 hard and 30-40 alk. There were a couple other GH videos posted by Barista Hustle as well on youtube.
I drink two shots before I drink two shots, then I drink two more....
Top

Good catch Trumz! I fixed my numbers and they now match Homeburrero's.

Why would they be specifying anhydrous? All I can figure is they want it specified pure. The Epsom salts I bought has no mention of purity where as all the searches of Anhydrous MgSO4 hit chemical suppliers where purity is 99% or better.
Top

Agreed-- why use anhydrous Mg sulfate???? That stuff is pretty hygroscopic (sucks water from ambient) and more expensive than simple Epsom salt (already hydrated...). Since hygroscopic compounds absorb water, weighing the correct amount becomes a challenge unless care is given to keeping it dry. Heck, we use anhydrous Mg sulfate in the lab to dry organic solvents.
Epsom salt, such as what you purchase in the drugstore is USP quality-- meaning it's edible, and this is the type of reagent one would like in their water.
Top

With the extremely low alkalinity, that much hardness might work. The recipe won't scale at brew temperatures, so the resulting brew should be mellower than the normal range's, but not muddy.
Jim Schulman
Top

Do you think its possible then that this recipe "resembles" what they run in their shops if its non scaling? I cant figure any other reason they would suggest that specific water recipe.

I'm brewing their Mamuto AA, so for the heck of it I made a brew with "70/30" water which is about 25 hardness and 40 alkalinity. Then made the same brew using 100 Hardness and 40 Alkalinity.

I do not know what they use in their stores. But if they recommend it to their customers, they probably do.

Back when I was doing my research, there were some old school Italian-American roasters who said that removing alkalinity from very hard water might produce a better brew than removing the hardness. It didn't go anywhere since making designer water was not thought possible.
Jim Schulman
Top
← Back
By accessing this site, you agree to the site's terms of service. If you need help with the site, please contact us.