Bitter aftertaste... it was my water filter and plumbing. - Page 2

Water analysis, treatment, and mineral recipes for optimum taste and equipment health.
← Back to Water •

That's both crazy and makes sense all at the same time. Thanks for sharing that resolution. There are already so many variables that we have to consider and control with espresso and the filter blowing out isn't one that automatically comes to mind!

Were there any signs of carbon particles? For example from steaming or a hot water spout? I can see where one would think they were espresso grounds if there were.

Thanks again for sharing this, no doubt it doesn't happen often but when it does this will be helpful!

One of the first things I checked for was carbon particles in the water...and there were none. That through me for a loop as well!
Top

Peppersass wrote:The check valve makes sense for your installation, but normally isn't needed for installations with a separate input feed.

From what I can tell online, the pressure rating of carbon filters ranges from 4-10 BAR (58-145), depending on brand and model. I've seen some good ones in the 6-7 BAR range (90-100 psi.) So the location of the regulator depends on your supply pressure. If it's higher than the filter rating you have to put the regulator before the filter. If not, and the filtration system has sufficient headroom, it may work better to put it after the filtration system.'

I would guess that unless your water source has very high pressure the main problem was the water slam and back-pressure from the sink tee.

Hey Dick, thanks for pointing out the system pressure point, that's one other thing I should have mentioned. I use a commercial filtration system that is rated for 145psi, my line pressure is definitely not that high, which pretty much verifies that the filter was being damaged due to the water slam back and for into the filter.
Top

Cerberus wrote:I'm waiting for my water filtration system to arrive in the next week or so (looking to buy the system that Clive Coffee sells). I follow what you did, but could you share a pic of your setup? I'm not a plumber, but it seems easy to install; however, I rather not go through the installation process twice... Thanks!

Here are some pics of my current set up. I had found this check valve locally as a quick test. If I was to do it again I would use the john guest fitting that Jaime has suggested. 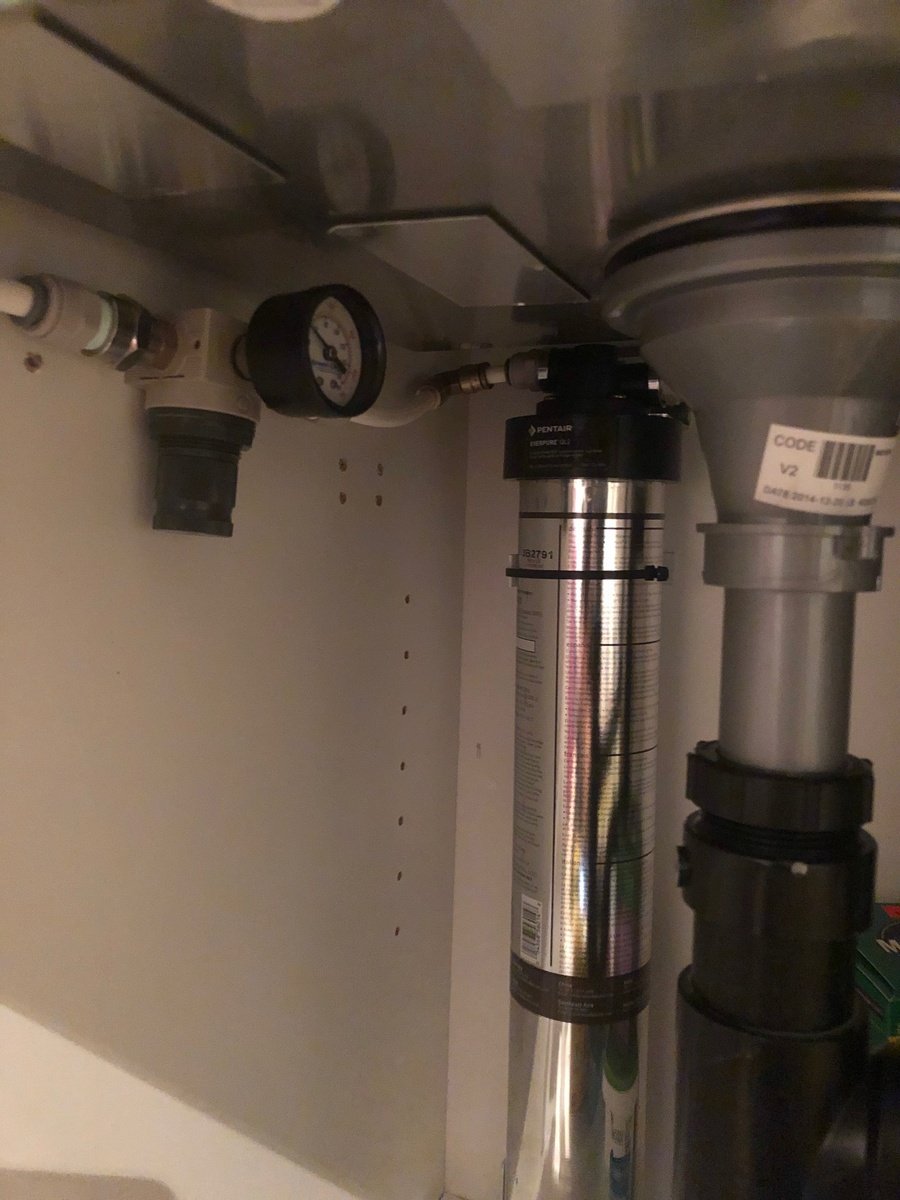 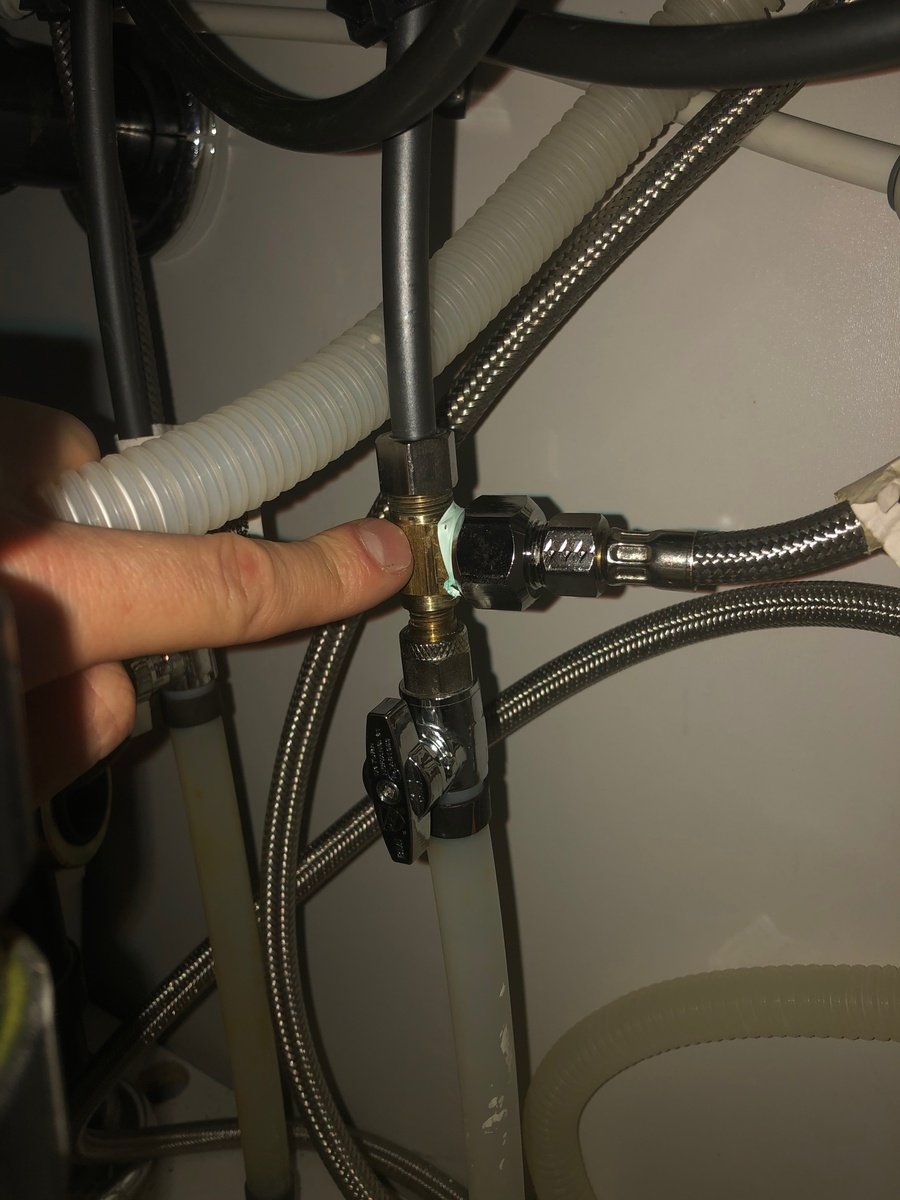 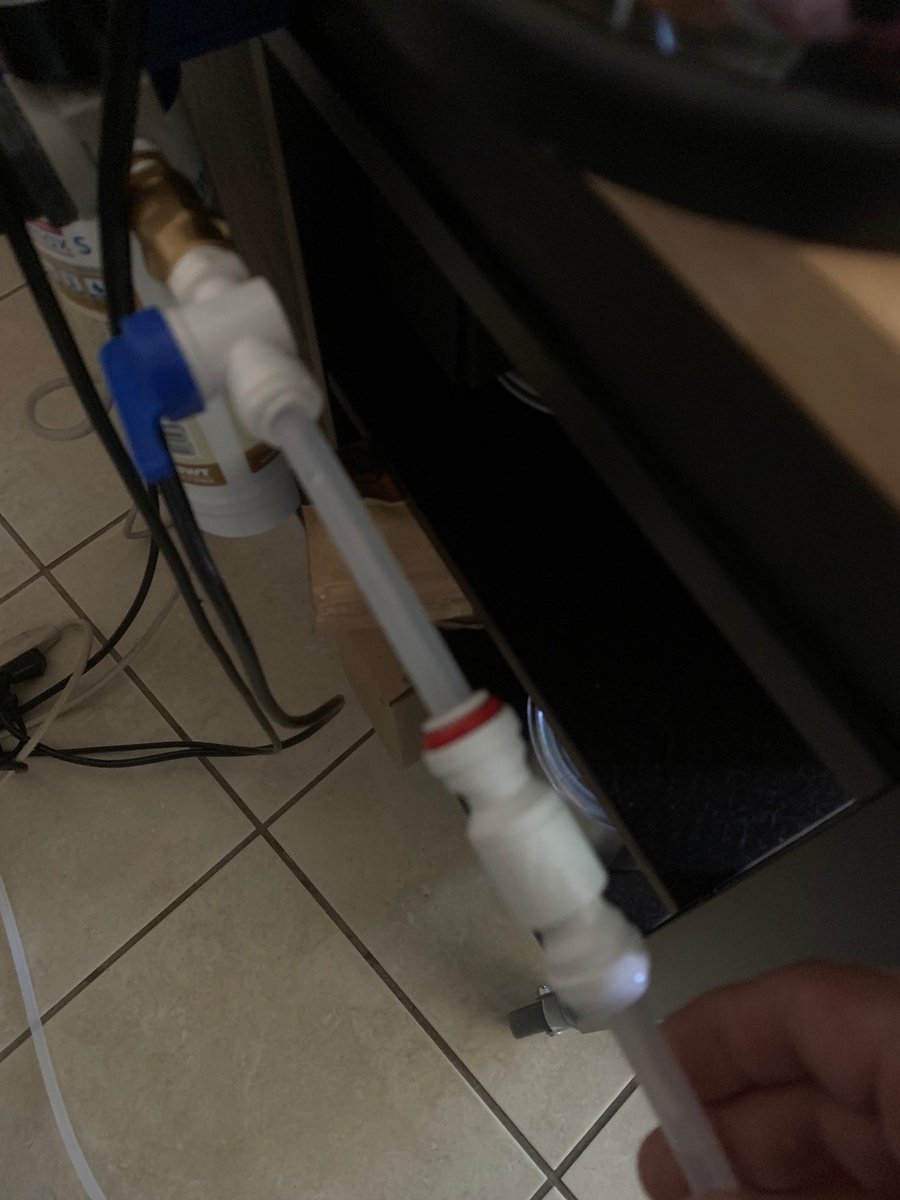 The filters and housing also arrived: 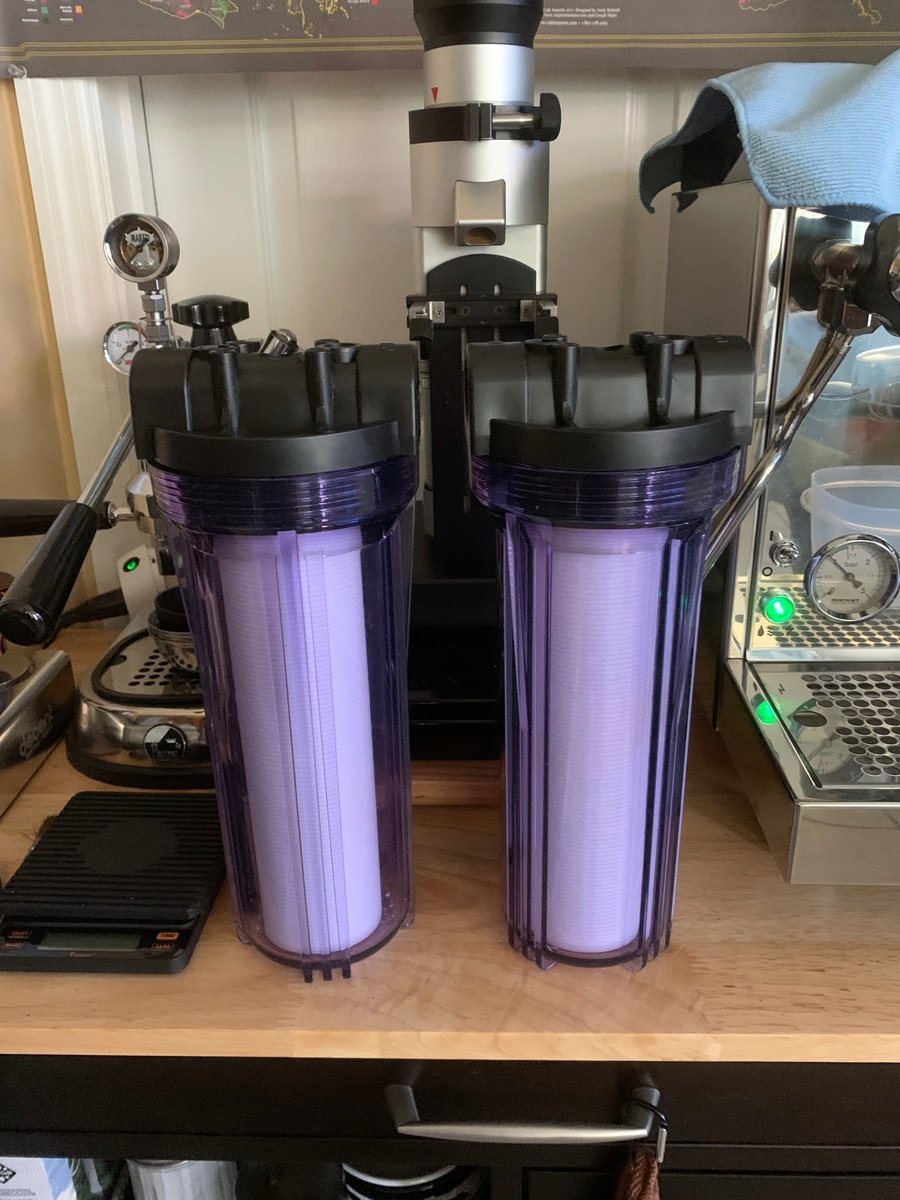 Is John Guest one way after the filter to the espresso machine? Or is it before the filter?
Top

I did it before the filter...
Searching for that perfect espresso!

That's right, to stop the issue I was having, the one way check valve needs to be between the water supply source and filters.
Top

Thank you both! My water filtration is coming in tomorrow. Supposed to have glass and tile bits 3 days ago, but somehow my package got lost. Filtration is going in Wednesday instead. Did either or you hook up drainage? Not sure how to connect that and I don't want to experiment. So for now, I'll just open up a hole in the wall (not going through the countertop) in anticipation of having it connected at some point...
Top

I held off on doing drainage for a few months because I was concerned about making a mistake when tapping into the "stink" pipe -- hard to recover from that and definitely not something you want to do over a weekend when plumbers may not be available. We have a septic system, but I think the issue is the same if your waste pipes lead to a sewer connection.

Eventually I tired of emptying the drain box, so I looked more closely at how to install the drain and realized that I could tap into the washing machine drain relatively easily. The washing machine empties into a flexible hose, which is routed up and arcs back down into an open PVC pipe. There's a trap underneath the open pipe to prevent stink from coming up through the open pipe. It's essentially like an open sink drain. All I had to do was install an upwardly angled tee fitting on top of the open pipe and attach a drain pipe from the machine to it.

Or so I thought. Everything worked great, but a few days later, when the washing machine emptied itself, a very loud groaning and gurgling noise came out of my machine, greatly amplified by the drain box, which acted like a megaphone. That was when I realized that traps do more than block odors from the waste pipes. They also block noise from each drain. At first I solved the problem by putting a loop into my machine's flexible drain hose. That worked, but later on I decided to install a dedicated trap in the PVC connected to the machine's flexible drain hose.

Note that the machine drain is about 10 feet away from the washing machine, so I had to install about 10 feet of PVC angled slightly down to connect them. There's a vent pipe just past the trap for the washing machine drain that I teed into, but I'm not sure whether the machine's trap that's 10 feet away meets building code for distance down from the machine's drain or proximity to a vent. All I know is that it works well and there have been no negative effects on the rest of our plumbing. However, sometime later when the building inspector came to check the plumbing for a new bathroom we installed in the basement, he looked at the espresso drain pipe and asked, "What the heck is that?" I told him, and he replied, "I'm not going to look at that." Friendly town.

Detail: The drain box on the machine has a hose barb screwed into the back to which the flexible drain hose that came with the machine is secured with a hose clamp. The hose angles down from the bottom of the machine to a hole I drilled in the Corian counter. Later I installed taller aftermarket feet on the machine to increase the downward angle and to make it easier to clean under the machine. The flexible pipe connects to a vertical PVC pipe in the cabinet underneath on which I glued a PVC adapter that allows the hose to be connected using a flexible rubber coupling. From there the PVC descends vertically maybe 3-feet into the basement to a trap. From the trap there's 10-feet or so of PVC pipe angled downward. At the end it drops down vertically into the tee with the washing machine drain.

As you know, a plumbed-in supply is great and most of us who have done it would never go back to using a reservoir. Many avoid plumbing in the drain, which seems less necessary, but having done it I'd never go back to emptying the drain box. Having it plumbed-in not only saves time and steps, it allows me to wash out the PF after every shot using my machine's hot water wand and to flush loose coffee off the screen by running the group as long as I want. It's a joy having a machine with it's own built-in sink!
Top

I went with a temporary drain solution for now. I will have a proper drain setting in the new house... this works extremely well for now.

And I completely agree with Dick...I am never going back to using the reservoir... plumbed all the way for my machine... soooo much better. 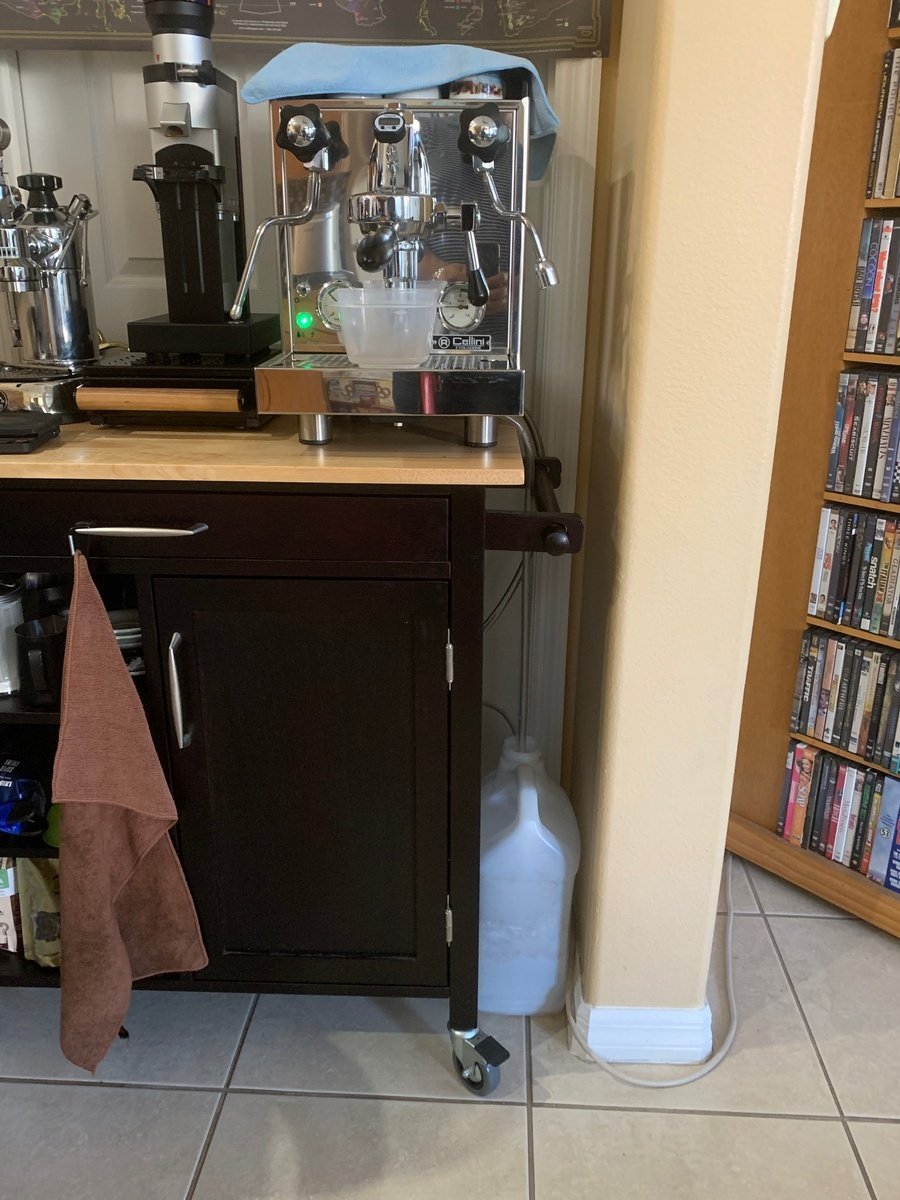 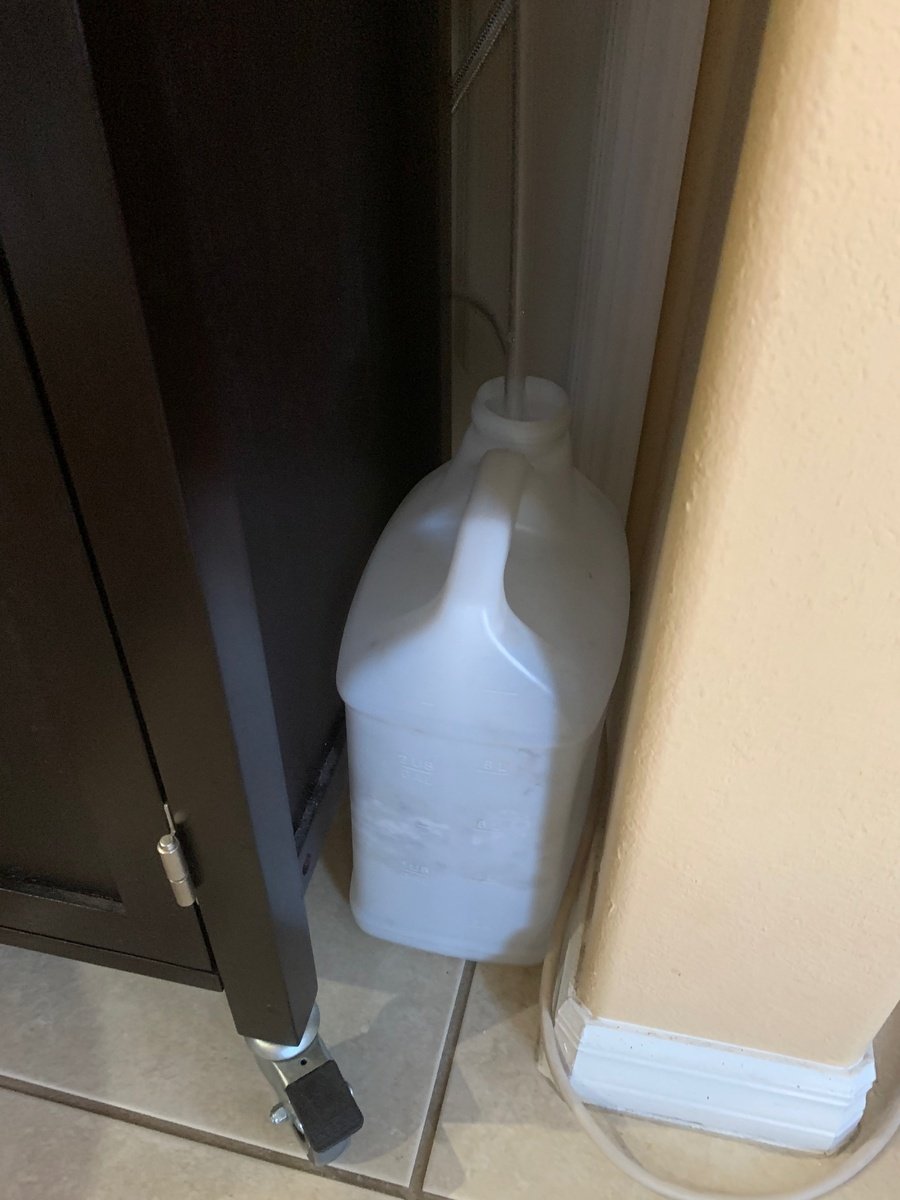 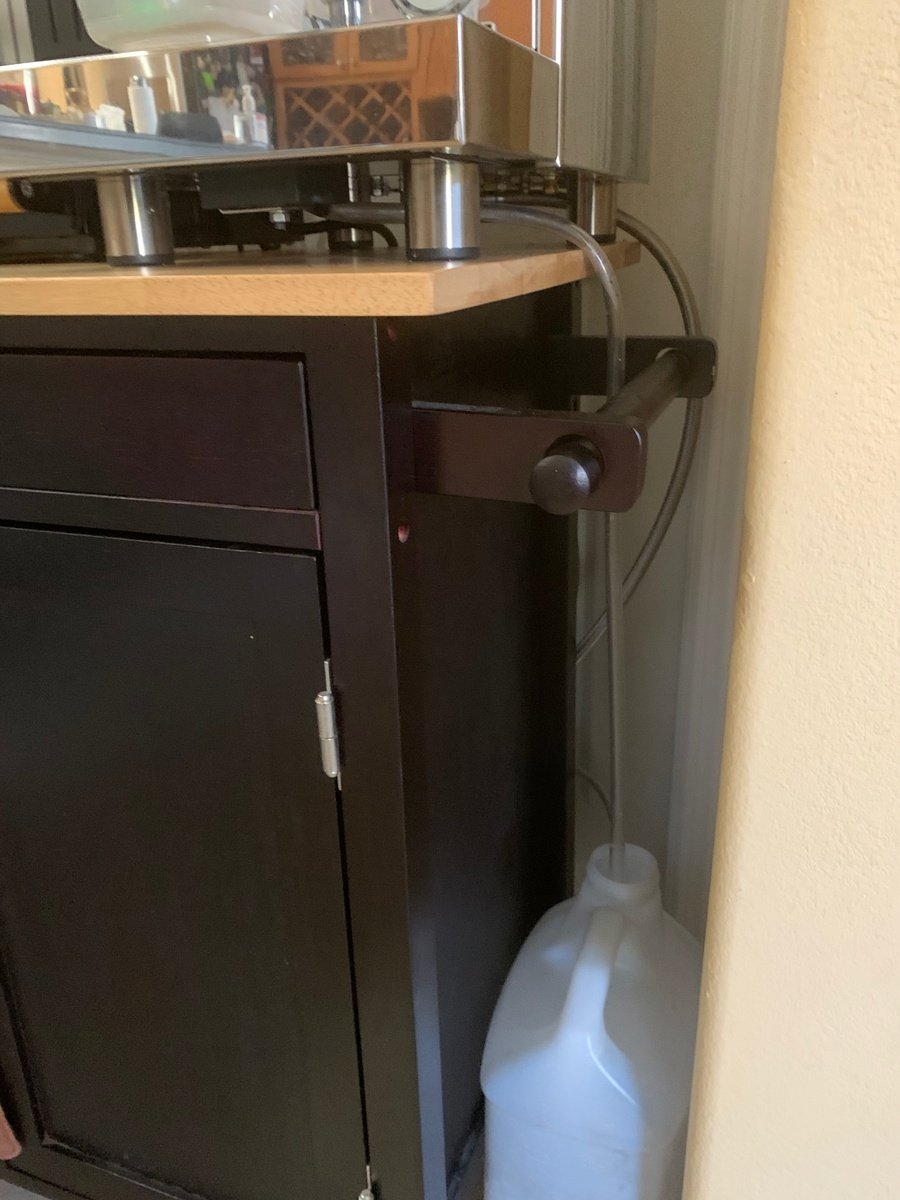 Wachuko - LMWDP #654
Top
← Back •
By accessing this site, you agree to the site's terms of service. If you need help with the site, please contact us.