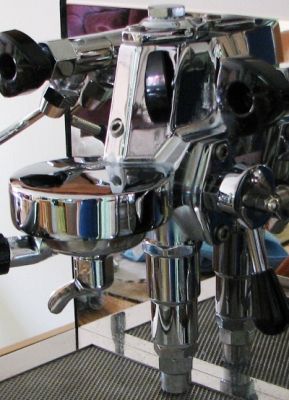 All you have to do is pickup the Vibiemme Domobar Super to know you have a substantial piece of equipment. Tipping the scales at 70 pounds this is no lightweight. The evaluation unit was the lever actuated version; the lever is located on the right of the group. On the semi-automatic and automatic versions, the lever is absent and a side plate covers the opening giving the group a sleak streamlined appearance.

One annoying problem with most E61 lever groups is that the 3-way valve that exhaust water into the driptray will spray the lower portion of the machine with dirty water. Vibiemme put an extension on the bottom of the group. This extension vents the high pressure water directly through the drip tray cover. This minimizes the amount of splashing against the face of the machine and makes cleaning up much easier.

Another item that deserves special attention is the flow restrictor in the thermosyphon line. Inexplicably, most machines imported into this country have no flow restrictor. The lack of a restrictor allows the group temperature to skyrocket, requiring a larger flush before brewing. The Vibiemme's well-tuned thermosyphon warms the grouphead to the desired brew temperature without overheating it, thereby avoiding the need for excessive flush amounts.

The drip tray is spacious and of a two part design. The tray cover consists of a frame with an expanded stainless steel cover. The mesh is spot welded to the stainless frame and provides plenty of space. The mesh is relatively fine; as a result it initially retains water. After a little use, that tendency diminished, but a slightly larger mesh would improve the flow through the surface of the drip tray cover. The drip tray itself is quite spacious. The two piece design allows you to leave the cover attached to the machines frame and simply remove the drip tray like a drawer. Grasp the drip tray handle and pull it out to empty

The Vibiemme Domobar Super has dedicated steam wand and water tap. Both are outfitted with a ball joint which gives you a large range of motion. The wands are fitted into a valve assembly that angles out from the front of the machine at about a 60 degree angle. While giving you two axes of movement, there is a limitation. The wands will make contact with the valve assembly when moving them out to the sides of the machine. This is a relatively minor issue given the range of motion. The steam wand is capped with a large two hole tip while the water dispenser sports an aerator.

As mentioned in the introduction, the Domobar Super is a pourover machine. It holds a whopping 3.8 liters of water. The reservoir has an enclosed top with a removable refill cap to prevent anything from falling into the water. The pump pickup tube has a screen tip to prevent any sediment from being drawn into the system. The over-pressure valve return line also feeds into the reservoir.

The water reservoir sits atop a spring loaded stainless steel plate. Under that plate is a switch. When the reservoir get low, the springs will push the plate up and trip the pressure switch under it, killing power to the machine save the low water lamp. 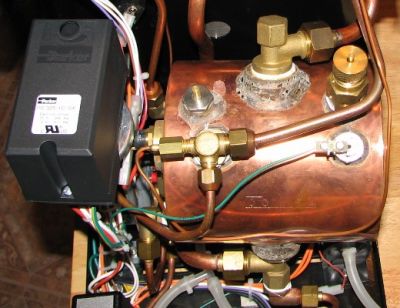 Under the covers, the Domobar Super is as impressive as its exterior. Dominating the inside is the large copper boiler and the Parker commercial pressurestat. The boiler is supported by a large U-bracket that is brazed to the front and rear portion of the boiler's underside. That bracket is then screwed to the frame providing ample support. That support relieves tension on the thermosyphon lines, which adds to longevity and reduces the risk of strain-related leaks. The Parker pressurestat sits high in the frame. This unit does not use a solid state relay (SSR), rather it directly controls the heating element via contacts that close when the pressure in the boiler drops. The Parker pressurestat is rated for 25 amps at 300 volts. The contacts close with an audible click. It is far from being noisy, but noticeable in a quiet room. Then again, if you were looking for a super-quiet espresso machine, you wouldn't purchase a vibratory pump driven machine, would you?

The pressurestat on my machine has a 0.13 bar deadband (the range between on and off), which is on par with other pressurestats of this type. Another noteworthy feature is the pressurestat support bracket. While some machines rely on the pressurestat tubing for support, the Vibiemme Domobar Super uses a heavy piece of zinc plated steel. The mount is screwed to the base of the frame and extends up the right side of the machine. The pressurestat is mounted to the steel bar, relieving undue strain on the copper line and fitting.

To prevent burning out a heating element, the boiler is outfitted with a thermal breaker. Gone are the days of struggling to find a replacement for a blown thermal fuse. If the Super's breaker trips, you can easily push the red button to reset it.

The over-pressure valve (OPV; it is also called an expansion valve) is located in the rear of the machine. For those of you new to the espresso machine world, the OPV controls brew pressure by venting excess pressure from the pump and returning the water back to the water reservoir. The Vibiemme has a commercial-quality OPV. Once the outer shell is removed, you can access the adjusting screw through an opening under the water reservoir. To adjust the OPV, turn the screw counterclockwise to lower and clockwise to increase.