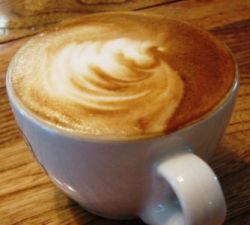 One of the defining features of the Vibiemme Super is its 2.7 liter boiler. When compared to most other E61 machines, it packs the boiler with an extra 1.2 liters of steam! The steam wand is affixed to the left side of the machine via a ball joint. That allows you to move the steam wand in any direction needed. The wand itself appears to be slightly larger than most in diameter. I would have to take my calipers to it to compare it with my Isomac. The wand has a small rubber grip point for moving while hot. Just don't miss, or you will be reminded when you sizzle a couple fingers.

The Domobar Super steams like a rocket. It will easily whip up 8 ounces of milk to a perfect microfoam. Smaller amounts of milk will steam nicely but may be a challenge for the first time user. You can retrofit the steam wand with a single hole tip or feather in the steam power by using small adjustments on the steam valve knob. You could also lower the boiler pressure to produce less steam but why? One of the defining features of the Domobar Super is its steaming power.

Steaming is usually one of the more difficult things to master on most machines. The Domobar Supers steaming power can be daunting to the first timer (or experienced home barista). These tips will help you jump into microfoam heaven:

Admittedly the steps above sound more difficult that it is. To make life a little easier, you may want to watch the video to the right.

Seconds required to heat water from 40 to 160 degrees Fahrenheit

As you can see in the steaming performance video above, the Super has formidable steaming capacity. If your forte is milk based drinks, or you occasionally entertain and produce multiple milk drinks, the Vibiemme Domobar Super will not disappoint.