Let's get to the coffee!

If you've done some initial research, you no doubt have come across the two popular types of espresso machine boiler designs: heat exchanger and dedicated brew boiler (if not, see Espresso Machines 101 for a quick recap). Much of what you'll read will focus on the extra steps heat exchangers require, a ritual known as the "cooling flush." Although dual boiler espresso machines simplify this necessity by dedicating a boiler to maintaining brew temperature, heat exchange machines are not without their own advantages such as:

I demonstrated the last point one weekend when Steve Robinson, the Lever Espresso Machines forum moderator, stopped by to check out the Vetrano. He sampled an espresso made from Intelligentsia Kid O's Organic espresso blend. Although he thought the texture was excellent, he noted a sour finish and asked for a retry. Lately I had been toying with borderline low temperatures to favor the "gentler" flavors than are muted by higher temperatures, but who am I to argue? One of the advantages of a heat exchanger machine is that you can tweak the temperatures in small increments by flushing a extra couple seconds (however not with the level of precision reported for the La Marzocco GS3; the last degrees of temperature management on a heat exchanger rely on the barista's skill and intuition). I've noted that Steve favors ristrettos, so I also increased the dosage by settling the grounds with an earlier portafilter tap on the grinder's fork while dosing. The extra grams of coffee slowed the extraction rate, pushed up the crema's creamy texture and amplifed the stronger flavors. The additional five seconds of rebound time increased the temperature just a tad. These two adjustments yielded an espresso more to his liking: Bolder initial flavors, richer crema, even finish— and not a trace of sourness.

Below are the steps for making your first espressos. Let's assume that you've adjusted your grinder for a reasonable 25-27 second extraction:

Remember to relock the portafilter back into the grouphead to keep it warm. At the end of a session, I also recommend a quick water backflush to clear the pathway from the grouphead to the pressure relief valve that empties into the back of the drip tray. Refer to Espresso Machine Cleaning - Why, How, and When for more details on a cleaning regime that applies to the Vetrano.

Whew! If all this talk of listening to cooling flushes has your head spinning, below are Bob Yellin's keep-it-simple rules that work well:

That's it! At the other extreme, if you want to push the temperature reproducibility of this espresso machine design to its limits, continue with the next section, otherwise follow the rest of the review with Steaming Performance on the next page. 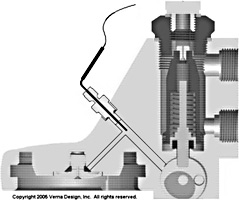 Many shoppers for high-end espresso equipment are stymied by choices. It's a lot of money to spend and the opinions on the "best" choice vary widely. The Andreja Premium has earned a good reputation since its introduction, but some buyers hesitate to purchase a heat exchanger espresso machine because of the added effort of temperature management compared to dual boilers, despite the hints offered online and in articles like HX Love. In order to master HX brew temperature control, Eric Svendson has done all the legwork to bring us a ready-made package shown to the right. According to Eric, the purpose of this adaptor is to facilitate the measurement of brew water temperature about 1.25" away from the puck during a real brew cycle using the thermocouple and digital thermometer of your choice. It requires no drilling, tapping, soldering, brazing, cutting, Teflon tape, or epoxy. The difference between the temperature that you will be measuring using this adaptor and measured temperature of the water hitting the puck is very close to the actual brew temperature.

My interest in this adapter was not determining the actual brew temperature, but collecting real-time data of the water exiting the heat exchanger to better judge the correct flush amount, independent of how long the machine had been idle. In other words, to answer the question: How consistent are the brew temperatures for those who simply flush the group until the digital thermometer says temperature X? I ran a series of tests using the E61 adapter to judge the correct flush. The measured results are excellent and confirmed by my daily use preparing espresso.

I had already determined that the proper temperature at the well depth for my routine was 206°F before the adapter arrived. Keep in mind that for the purposes of this test, I didn't worry about what the adapter's reported temperature relative to the brew temperature might be, as long as it indicates the same readings every time. I note a very distinct "knee" right around 205°F. The temperature moves slowly prior to that and then plummets just past it. Below are the results of five simulate extractions measured with the thermofilter using this approach:

The utility of Eric's adapter is plainly evident: By tuning the flush amount based on the adapter's digital thermometer reading, reproducible temperatures are easily obtained within ~1°F. Bob Yellin's simple rule of "flush two ounces if it's been three minutes" described in Pulling Shots by the Numbers works well for that situation, but the adapter enabled me to improve on it with these easy-to-follow steps:

In summary, those who worry about the complexity of HX temperature management have a solution that a half-blind one-armed barista suffering from a mild case of AADD could not screw up. I look forward to the day when such a readout is standard equipment on consumer heat exchanger espresso machines. In the meantime, those who wish to push heat exchanger temperature reproducibility to the maximum have a straightforward option.