Coffee and espresso equipment reviews by the site's members.
← Back to User Reviews
From the Team HB review of the Ratio Eight Brewer: 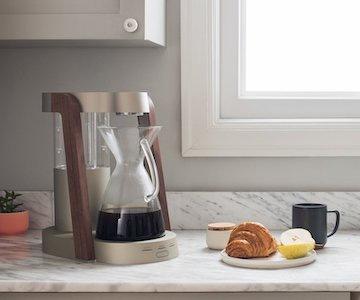 With the membership's increased interest in other brew methods, this review features a precision brewer that automates the process of a manual Chemex brewer. Unlike the utilitarian combination of stainless steel, glass, plastic and more plastic that characterizes nearly every home brewer, the Ratio is housed in a cast aluminum shell with anodized finish and accented with real wood

It has no switches or knobs. To maintain the smooth one-piece look and eliminate moving parts, the start brew switch is touch sensitive. Similarly the carafe has a cork bottom with embedded magnet that the base unit uses to detect if the carafe is absent or if it's removed mid-brew. If your appreciation of art leans to minimalism, the Ratio is certain to complement your kitchen decor.

OPERATION: As the name implies, proper coffee extraction requires a proper ratio of water to coffee (and of course, proper grind setting). The Ratio water reservoir has halfway and full line marks, though we recommend weighing the water/coffee, as it's easy to under or overshoot the desired water amount by going a smidge above or below the line. If you use a scale, remember to allow for the weight of the carafe itself. The SCAA recommends a 18-to-1 ratio of coffee to water (or more precisely, 55 grams of ground coffee per liter). Although the scale is optional, of course a grinder isn't.

The Ratio includes a KONE permanent filter; it you prefer, it accepts paper filters, as does any Chemex brewer. The brewing begins with a brief bloom phase where a small amount of water saturates the coffee bed then waits while the grounds expands; the brewing phase follows shortly thereafter. The full cycle is automatic and takes only a few minutes. The slowly bubbling water column in the reservoir offers a little coffee theater as it progresses.

TASTE TEST: We compared the Ratio Eight and Bonavita BV1900TS. The first round featured a Colombian coffee called Kuichi (the name of a collective of 22 farmers). We used the VST refractometer to confirm the total dissolved solids were within SCAA brewing specifications. For the blind taste test, we used another coffee that would be more revealing, an Ethiopian coffee, Olke Birre, named after the farmer who grew it.

We were really surprised to see a clean sweep in favor of the Ratio Eight.

Although our taste test was only two rounds, I didn't expect such a lopsided result. Then again, as Tyler and several others noted, they both performed admirably, brewing a deliciously sweet cup. It just happens that for this particular test, the Ratio Eight was just a tad sweeter.

Counter Culture Coffee had recently spent weeks evaluating brewers to decide which to carry and the Bonavita was selected as an ideal value choice. We considered possible reasons, notably that we intentionally used Chemex brew receptors and KONE filters, which of course isn't the standard configuration for the Bonavita. We decided to repeat the round, this time with standard configurations (i.e., stock KONE filter and Chemex for the Ratio, paper filters and basket with coffee decanter for the Bonavita). There was even talk of checking the level of the Bonavita since one participant noted it did not drip as evenly as he expected.

FINAL LOOK: It's worth noting that the Ratio Eight borders on a modern kitchen's objet d'art, like the typical fashion model, it's taller than its less striking contemporaries.


Even nowadays there's a dearth of high quality home coffee brewers available on the market. High build quality, solid, reliable construction and simple execution elevates the Ratio Eight to the higher tier of what a home user can expect from great coffee. With a limit to what you can adjust in terms of brew, still yields excellent, "no fuss" results in brewed coffee.


← Back
By accessing this site, you agree to the site's terms of service. If you need help with the site, please contact us .