Coffee and espresso equipment reviews by the site's members.
← Back to User Reviews
From the Team HB review of the Profitec Pro 800: 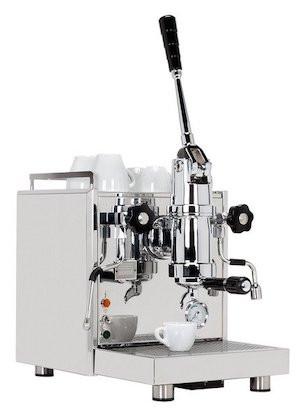 Lever espresso machines are enjoying a resurgence of popularity. The stars of this modern renaissance is undoubtedly the Olympia Cremina and La Pavoni Europiccola, but a number of commercial levers built around the Rosco group, like the Profitec Pro 800, are garnering interest on this site beyond the fans in the Levers forum.

Over the course of the review, I learned that these commercial lever espresso machines differ from their smaller siblings not just in capacity, but in ease of use. Temperature management and especially the qualitative "forgiveness factor" really stood out for the Profitec Pro 800. While the E61 group featured on the majority of espresso machine reviews on this site garner consistent praise for ease of use, I was surprised that the Rosco group, thanks to its naturally declining brew pressure profile, was just as forgiving, if not more so!

OPERATION: It requires a fair amount of strength to pull down the lever since you're compressing a powerful spring capable of generating enough pressure for brewing espresso as the spring decompresses. By their very nature, lever espresso machines offer a more hands-on experience than pump-driven machines.

Pulling a respectable espresso is practically a no-brainer and modest attention to detail yields consistently above-average results. Even relative espresso newbies will find the Pro 800 a friendly learning platform; the no-burn steam wand and smooth controls are also easy to master, though professionals may find its pace of 30+ seconds for steaming a traditional cappuccino too slow.

On a related note, while perusing the Caffè Lusso site (an HB sponsor), I noticed that they advocate for "old school" commercial lever espresso machines. Curious about this choice in a commercial setting, I reached out to their owner, Philip Meech. He provided some of the backstory for Caffè Lusso and their affinity for levers. Specifically to this review, I asked him "What advice would you offer to someone starting out with a lever machine?"


Philip Meech wrote:Allow yourself to be surprised. I've had 40+ second shots that were absolutely delicious. Not exactly normal - we tend to go 3-5 seconds of pre-infusion with the lever in the "locked" down position, then gradually releasing for another 25 seconds of extraction. But there have been times when I've been caught off-guard with how good some longer-time shots have been. Also, there is a huge difference in the extraction between super-fast releasing the lever from the "locked" down position, versus a slow, more deliberate releasing the lever to around the 45 degree angle where transitions into pushing the water through the espresso puck.

It's worth noting that in my experience, lever fans are among the most diverse and opinionated about barista technique. If you join the lever club, be open to experimentation.

SUMMARY: If the placement for your espresso equipment is free of overhead cabinets, the Profitec Pro 800 deserves equal consideration with any of the E61 HX espresso machines reviewed on this site. On the other hand, if your taste preferences lean towards bright coffees or coffees demanding strict temperature control, a double boiler and ideally a saturated group with a flat brew profile would likely be more to your liking. With that caveat aside, the Pro 800 deserves equal footing with any pump-driven espresso machine in its price range.

← Back
By accessing this site, you agree to the site's terms of service. If you need help with the site, please contact us .