Coffee and espresso equipment reviews by the site's members.
← Back to User Reviews
From the Team HB review of the Flair Espresso: 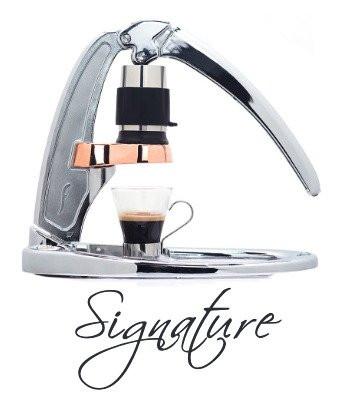 The concept of the Flair Espresso Maker isn't new. Pourover piston espresso machines were introduced in 1950 but soon went out of fashion, so it's great to have modern versions. We like the Flair a lot, first and foremost because it works. You can brew excellent espresso from dark to light roast levels. The basic model is less than $200 and you'll consistently brew much better espresso with the Flair than with far more expensive machines.

Moreover, it's well made, attractive, and very portable. The Flair isn't perfect. During our tests, minor fit and finish issues with the Signature model were found. But none of these interferes with its functionality. The Flair is a straight shot-puller that doesn't steam. But with an independent source of hot water, a thermometer, and a good grinder, it does make real espresso.

CONCLUSION: We achieved consistent and enjoyable espresso quality with the Flair. Temperature control could be consistently achieved and flavor separation was good. Mouthfeel tended to be light compared to other levers, although that could be somewhat compensated by a strong pull and by adopting a lower brew ratio or "ristretto" shot style. It created real crema that had a less buttery mouthfeel than most other lever machines, such as the Caravel.

For a novice user, there is a bit of a "fumble factor" choosing between fresh coffee, a grinder that's up to the task, assembling the extras needed for sufficiently preheating the cylinder and brew water, handling the hot cylinder, and measuring dose and output. Once you have the feel for the process, it's pretty straightforward. The good design of the Flair's accessories and user manual make things easier, including the dosing funnel that allows insertion of a tamper while it's in place, and the high quality optional steel tamper.

On the all important price/performance ratio, the Flair sets a new standard. We don't know of any other device that makes real espresso and does it consistently at this low price. The Flair Espresso Maker is a price/performance breakthrough and an excellent value.