Coffee and espresso equipment reviews by the site's members.
← Back to User Reviews
From the Team HB view of the Elektra Microcasa a Leva: 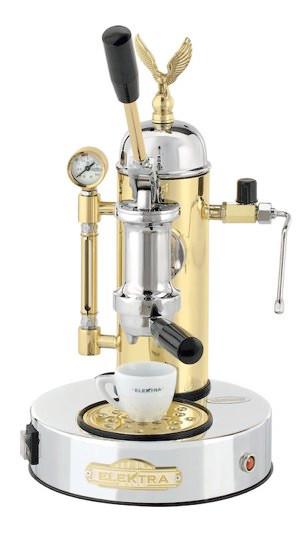 The Elektra Microcasa a Leva is the most traditional of Elektra's home espresso machines. Its stunning design recalls a golden era when Italians invented the espresso we know today. When you see one up close, its beautiful design and finish reveal that this more than a home appliance, it's a work of art. The Microcasa a Leva comes in three finishes: chrome and brass, all chrome, and copper and brass.

The Microcasa a Leva uses a spring-loaded piston to press water through coffee, just like the classic espresso machines of the 1950s. The brew group holds ground coffee, sealed inside a handle (portafilter) that locks in for pressurized brewing. Pulling the lever down cocks a spring while allowing water to flow into the brew chamber above the coffee. Releasing the lever uses the power of the spring to push hot water through the coffee. This pressurized brew process creates a delicious, concentrated coffee drink with a buttery mouthfeel, topped with a layer of creamy foam. A sight glass shows the water level in the boiler. A steam pressure gauge indicates whether the boiler has heated to operating temperature. The wand on the right is for steaming milk drinks.

OPERATION: The Microcasa's 850 watt heating element brings the boiler to brew temperature in about 12 minutes. The Microcasa will fully warm up in less than 30 minutes without a heating flush. Its 1.8 liter boiler is large for a home lever machine and delivers nine double shots, somewhat fewer when steaming milk drinks. Its boiler, steam wand and group are exposed, so it is not suitable for homes with small children, where it could pose a burn hazard. The spring on a machine like this is powerful and can be hard for some people to operate without using two hands.

The Microcasa creates high quality microfoam suitable for latte art. The intensity of steaming varies depending on the pressurestat setting. The wand is positioned well away from the machine and has a three hole tip that makes it easy to create a swirling vortex to heat milk evenly.

CONCLUSION: The Elektra Microcasa a Leva comes highly recommended for its excellent shot quality and steaming, its stunning good looks, and ease of servicing.

For a lever espresso machine, the Microcasa is extremely easy to use and consistent, if the brew temperature is well controlled, which requires learning some operational nuances covered in the full-length review. New users or those who have only had pump machines will have to rely on dose and grind to control flow rate. This may be challenging. The Microcasa is relatively forgiving of technique because its declining spring pressure reduces channeling or overextraction.

Espresso performance is rated relatively high because shots are mellow and layered, plus the shot volume is good compared to some home machines (it is smaller than with the commercial lever groups recently offered in prosumer lever machines like the Bezzera Strega or Londinium I). If you prefer thick and syrupy ristrettos, you may want to consider a manual lever espresso machine like the Olympia Cremina or La Pavoni Europiccola, which can deliver higher brew pressure by pushing the lever harder. The Microcasa's maximum brew pressure is limited to around 6 bar by the power of its spring, delivering a slowly declining pressure profile. The result is a delightfully layered taste profile and exceptional clarity while sacrificing the heavy body manual lever espresso machines can deliver.

Sponsored by Espresso Vision
By accessing this site, you agree to the site's terms of service. If you need help with the site, please contact us.