Coffee and espresso equipment reviews by the site's members.
← Back to User Reviews 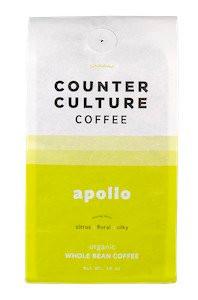 Ethiopia is the birthplace of coffee and is home to many of the best coffees in the world. Inspired by their floral and citrusy notes, Counter Culture uses 100% Ethiopian coffee in Apollo, for a coffee that tastes silky, sweet, and bright.
BACKGROUND: When Counter Culture Coffee released Apollo in the summer of 2010, the goal was to create a blend using the best possible coffees of the moment. It was a radical idea for its time-a coffee blend not focused on tasting the same all the time-and pretty quickly washed coffees from Ethiopia became the anchoring component, due in large part to their consistently superior quality.

Eventually, Counter Culture Coffee made the choice to transition Apollo to 100% certified organic washed Ethiopian coffees, officially making Ethiopia the headline instead of the detail. Apollo is a year-round celebration of the birthplace of coffee and it's bright, floral, and silky coffees. Specific lots will change with the seasons, but the thing that will never change is the complexity of the coffee.

← Back
By accessing this site, you agree to the site's terms of service. If you need help with the site, please contact us .