What's the best way to use Eric's E61 thermometer adaptor?

I just received the digital thermometer adaptor from Eric S, which installed easily into my Anita. Now I'm trying to learn the best way to use the thermometer to improve my shots.

Before receiving the adaptor, I'd been flushing about six seconds past the flash, then waiting 15 or 20 seconds and pulling my shot. With the adaptor, I can see that the group temperature is about 198 degrees when I stop the flush, and goes up to about 200 degrees by the time I pull my shot. So far so good. But then the temperature drops steadily during the shot, sometimes all the way down to 191 or so. What gives? I thought the temperature on an E-61 machine stays pretty stable throughout the shot. By the way, the boiler is set to 1 bar and I allow at least half an hour for the machine to warm up.

I also tried flushing all the way down to 185 degrees then waiting for the HX to rebound up to 198, but this seems to take a long time and I'm not sure the results are any better. Now I'm not sure what I'm doing wrong. Maybe I'm a victim of too much information. Sometimes life is easier when you live in ignorance.

Anyone have any suggestions for getting the most out of the thermometer?
Lock and load!
Top

I have just adjusted my Anita's pstat such that it "reads" 1.0 bar MAX and am letting the machine stabilize at this setting. I'll post some graphs later on but keep in mind that my 1.0 bar and your 1.0 bar may not really be "exactly" 1.0 bar. And, of course, my 198 F may not be your 198 F. But that's OK because it is all relative.

For the puposes of discussion, I separate espresso production into two steps:

I choose to do a. and b. concurrently or rather near concurrently whereas lots of users choose the consecutive route. More later.
Skål,

After a bit of experimenting and a post by Compass Coffee I've been able to set up a routine which essentially uses the adapter as a rough guide.

1. Flush until desired temp. for me this is generally to around 202-203 ish I say "ish" as the temp is rapidly falling on my Fuji controller that is used only for readout purposes and it depends on how quick I push the lever. Remember the adapter is measuring temp on its way to the brew head so there is somewhere between 4-5 degrees higher on the readout.
2. I then grind my beans and and build my PF.
3. Because of the character of my Volante I then flush for a fast 2 count after the end of water dance. Generally about 4 oz. At this point my readout is hitting sometimes 208 to 210f It does vary.
3. At this point I'm standing poised with my built PF and watch temp fall down to 207, lock it in, and pull when its in the high 205's. I don't immediately lock in the PF after the 4 oz flush out of concern for changing the group head temp even further.

For the second shot, the 1 st is for my wife, I dump the puck, rinse the PF, rinse & wiggle the GH with my 2nd blind basket PF while grinding. Dry my naked PF build my shot and then:

In the beginning of my use of the adapter I had a hard time finding the right amount of initial flush, the one after a long idle. Eric and I emailed back and forth for quite some time, kudo's to Eric's patience, but what nailed it for me was a mention by Mike, I think, of flushing it to desired temp and then building. This may not be an exact enough method for some but its the closest I've gotten to temp stability. I've seen the readouts vary no matter how precisely I've repeated my actions.

Good luck and I hope this helps as a starting point.
Top

Thanks for the replies. I have been preparing my puck first, then flushing, waiting, then pulling the shot. This eliminates the second mini-flush before pulling the shot. It seems to me that this technique should work as well as doing the double flush, as long as the amount of the flush and the timing are right.

Here is a graph showing grouphead and thermofilterfilter temperatures under the following conditions: 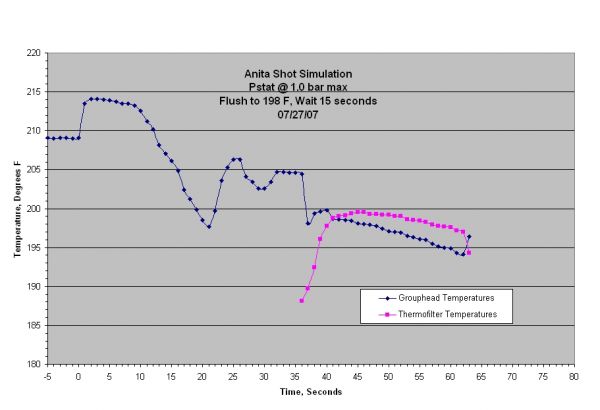 I know you said that you flushed approximately 6 oz (turned out to also be 198 F), waited approx 15 sec and then pulled shot. This is very much like the method used by Bob Yellin and his Andreja Premium but I believe he is running a little higher pstat setting (don't know exactly but I believe it is around 1.10 bar) and he waited 30 seconds vice 15.
Skål,

I don't have an E61 Grouphead; however, I use a thermocouple located in a very similar location on my A3 and saw similar results to what you are seeing. I'm sure you have done so already, but the thread Monitoring Brew Temperature - E61 & Silvia contains a lot of great information.

Have you tried flushing to the target temperature and pulling the shot? I flush it once (it peaks at over 220F after a long idle) down to around 200, build the puck, flush to target temp and then immediately pull the shot. 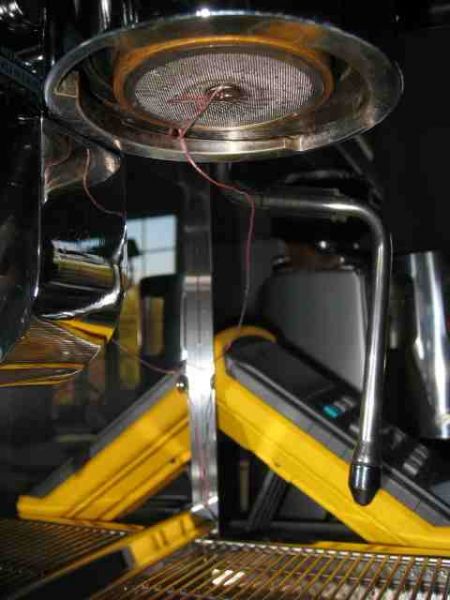 erics wrote:Here is a graph showing grouphead and thermofilterfilter temperatures under the following conditions:

I was a bit surprised to see the grouphead temp tracking below the thermofilter temp.... that's atypical is it not?
Jeff Sawdy
Top

Jeff, you are correct. I was simply matching my Anita's pstat and shot pulling method to what Beezer was doing plus it gave me an excuse to pull the shower screen and get it pristine for the thermofilter runs -

Typically (and I imagine we all sometimes dislike that word), the grouphead temperature and the thermofilter temperature approach one another pretty close at the conclusion of a normal double shot. 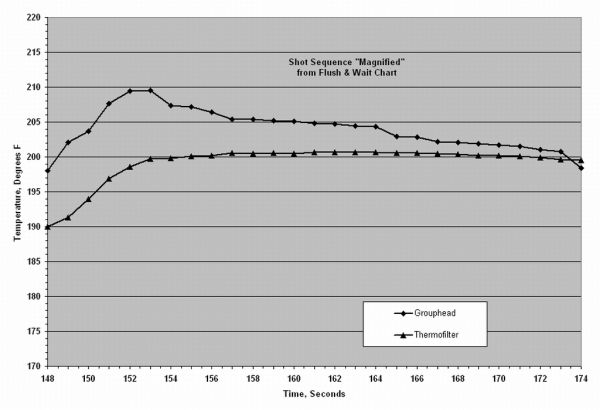 Thanks for posting those graphs, Eric. It looks like a 15 second rebound after the flush might not be long enough to stabilize the group head, judging by the graph. Maybe I should wait more like 30 seconds. Still, the brew temp seems to be fairly stable, just dropping a couple of degrees during the shot. Not as stable as the other graph you posted, but still not too bad.
Lock and load!
Top

Beezer - you're right on!

Steven - if you pull your shot right after hitting the target temp, you are probably going to cool off too fast during your shot.

Someone at cg had asked if I was compensating for the differential between the adapter and the top of the puck. I reflected on that thought and tested against another TC I had on my DMM. Eric's charts show it's not a constant differential. But, what I did realize, is that I should have played around with temp more. I was pulling most shots at 201' according to my adapter. I have found that shooting for 205' has actually dramatically improved some blends.

You'll have to adjust your target cool down temp and your rebound time to compensate depending on your idle GH temp. But, heck, if it isn't a fun obsession, what kind of obsession is it?

Geoff
Top
← Back •
By accessing this site, you agree to the site's terms of service. If you need help with the site, please contact us.