The Weiss Distribution Technique is NOT a 'cheat'!

At the same time I was trying out the Weiss Distribution, discussed in Convex tamper and NSEW technique. Pros may eschew this technique, but John Weiss' (RapidCoffee) and my own experience support the assertion that the extra stir action does enhance the evenness of an extraction, especially for grinders that tend to clump. I bet newbies who are still working on their distribution technique will also see better results with this "cheat."

While the difference in extraction quality with or without the Weiss Distribution may be minor with a forgiving E61, the difference is likely more stark for demanding machines, which reminds me of Ken Fox's point in the conclusion of The Impact of Preinfusion on the Taste of Espresso Shots:

Ken Fox wrote:If you have a rotary pump driven machine and it does not preinfuse the grounds, the modification I have done is fairly easy and cheap to do. The result of doing this modification should be greater tolerance to grind settings, easier switching between coffees, with less sink shots resulting. This is to say that with preinfusion added a non-preinfusing rotary machine begins to more and more resemble the way that a vibe pump driven machine operates. For ease of operation and less hassle, I'd suggest just installing the delay timer in your non-preinfusing rotary machine, without a need for an on-off switch.

HB wrote:His comment prompted me to work the last couple days trying to answer the question: Is a rotary E61 less forgiving than its vibratory pump equipped cousin? No doubt the difference, if it exists, is very small. I strived for hyper-even extractions in the attempt to demonstrate to myself that the difference was either noteworthy or negligible. After days of the most even pours I've ever managed, I'm still undecided. Perhaps this is a good group test for EspressoFest (Anita / vibe versus Vetrano / rotary), most even extraction wins?

Very thoughtful and interesting post Dan, but I must disagree with the assertion that the Weiss Distribution Technique is a) a cheat

, or b) that the difference in extraction quality, even with an e61 may be minor, for the following reasons:

a) sure a pro would eschew this technique, as it takes more time than a NSEW, chop, or Stockfleth, and would lead to less through-put (ie.$); but it involves less pawing of the coffee, and is clearly a more consistent method of achieving even distribution. Sometimes the HB is in a better position to strive for absolute quality.

b) A naked PF will show gross errors (as Ken puts it) in the puck, the puck itself acts as another sign of errors, and the taste will show all errors. The Weiss Distribution often gives perfect NPF pours, perfect to near-perfect pucks, and my worst pours using the WDT taste miles better than my best NSEW pours.

It has made such a difference to my extractions that I hope that any reader who has not tried the WDT to give it a try before considering a new machine or grinder.

Split from The Buyer's Guide to the Quickmill Vetrano by moderator...
Top

Dogshot wrote:I must disagree with the assertion that the Weiss Distribution Technique is a) a cheat

, or b) that the difference in extraction quality, even with an e61 may be minor, for the following reasons:

(a) I wondered if the term "cheat" would set someone off. If you prefer, it is a compensation technique. I haven't determined if it compensates more for shortcomings in the grinder's distribution, the barista struggling to master more common techniques (e.g., Stockfleths), or both.

(b) My comparison was an E61 vibratory pump versus an E61 rotary pump, not Weiss Distribution versus Stockfleths, for example.
Dan Kehn
Top

Dogshot wrote:a) sure a pro would eschew this technique, as it takes more time than a NSEW, chop, or Stockfleth, and would lead to less through-put (ie.$); but it involves less pawing of the coffee, and is clearly a more consistent method of achieving even distribution. Sometimes the HB is in a better position to strive for absolute quality.

Not sure we can say it is "clearly" a more consistent method, unless you want to qualify that to say "for someone who is still mastering other distribution techniques." I don't know that my dose + Weiss distribute results in a better distribution than a pro's dose + stockfleths, etc. I know that when I'm really in sync, my dose + stockfleths results in almost identical shots to a dose + Weiss.

I DO agree that for someone with a grinder that has a real dosing bias to one side of the basket, and/or is struggling with other distribution techniques, the Weiss method is very likely to be better.
Top

skyryders90 wrote:I DO agree that for someone with a grinder that has a real dosing bias to one side of the basket...

You can rotate while dosing to compensate, but it's true that all the Mazzers I've used strongly favor the left. Doserless grinders like the Mini E / modified Super Jolly's are probably the biggest benefactors since the stirring breaks up the clumps and corrects for their tendency to dose unevenly. At the other extreme, the Versalab M3 grinder evidently sees no benefit from either the Stockfleths move or Weiss Distribution. From Abe's Day 4:


Abe Carmeli wrote:That distribution technique which works with all other grinders, does not work well with the M3. The grounds are already at a state of almost perfectly even density right out of the grinder, and the Barista's job is to mess as little as possible with it.

My heartfelt thanks to Jon, Dan, Mark and everyone else who gave the WDT a try. FWIW, I also dislike the connotations of the word "cheat". But I tend to agree with Dan when he says this is primarily a method for overcoming grinder-doser inadequacies.

Many factors contribute to an excellent cup of espresso: freshly roasted beans, correct grind, good barista skills (dosing, distribution, tamping), correct brew pressure and temperature... This method only impacts distribution and dosing. There is little doubt in my mind that stirring with a needle leads to a more uniform distribution of grounds in the filter basket. As Mark says, the needle penetrates to the bottom of the basket, whereas other methods (Schomers, Stockfleth's, Chicago Chop, leveling with a straight edge) basically push the grounds around the surface of the puck.

I'm very glad Mark found this method so effective. Lest expectations run too high, my experience is perhaps closer to Dan's. Extractions are slightly more even and consistent with the needle stir, but I also get good pours without it. Dan and I are both using rotary pump Vetranos, which in my hands is an exceptionally forgiving machine. The stirring effect was greater on my previous machines (vibe pump Oscar and rotary pump Rancilio L7), which do not feature the preinfusing E61 group head. The grinder-doser undoubtedly contributes as well. My doserless Mazzer Super Jolly is, in Dan's inimitable words, a "clump monster". The needle is a great way to break up clumps.

RapidCoffee wrote:My doserless Mazzer Super Jolly is, in Dan's inimitable words, a "clump monster". The needle is a great way to break up clumps.

I hope you don't mind me sharing your photo as Exhibit A: 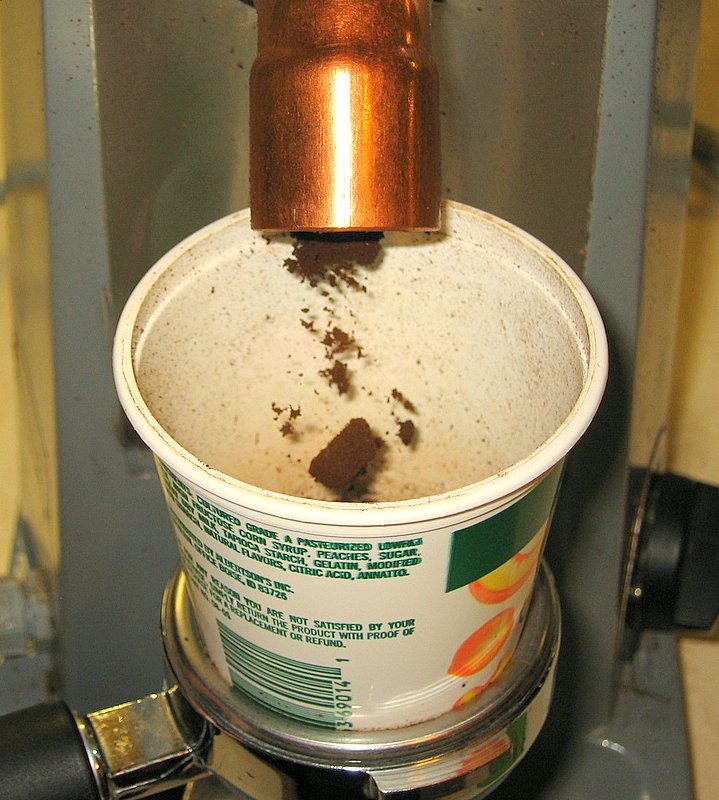 RapidCoffee wrote:But I tend to agree with Dan when he says this is primarily a method for overcoming grinder-doser inadequacies.

I agree, too. If I still had my Mini-E I bet I would use the hell out of the WDT. These days I have a Cimbali Jr. which has very little, if any, clumping. It also avoids the throw-left bias of the Mazzer dosers, instead dropping clump-free grounds straight down. Don't get me wrong, it's not nearly requires-no-distribution-Versalab perfect or anything like that. I just find that I get pretty much the same pours using the needle as I do using stockfleths, and given that I tend to avoid the extra implements and time of the swirls.

Regardless of that, the word "cheat" is not appropriate. "Cheat" implies that you're doing something you're not supposed to be doing, and frankly the espresso police can kiss my $%@ when it comes to what is "right" and "wrong" - if the espresso produced is good then whatever I did was, by definition, "right." =)
Top

skyryders90 wrote:"Cheat" implies that you're doing something you're not supposed to be doing, and frankly the espresso police can kiss my $%@...


It is 80 years since Harry Houdini's last escape, but the enduring myth of his achievements remains. In the history of entertainment, Houdini is remembered as the magician who cheated death, over and over again - a master of suspense, a man of his age and of the people.

Fair enough, though I think the "not supposed to do that" definition is the one that most would associate with the term used in the context that we're using it here. If you're using "cheat" to mean "deliberately violate accepted conventions," then I think the Weiss technique IS a cheat - the accepted convention certainly doesn't involve wiggling a needle through the grounds as a distribution technique. In this sense I don't mean it as a pejorative term at all.

Accepted conventions ... hmm. John Kenneth Galbraith once said that "[t]he conventional view serves to protect us from the painful job of thinking." In many cases I think he's right. Perhaps this is why I assumed you mean "cheat" to mean "not supposed to do that" - I tend not to worry much about the accepted convention.
Top
← Back •
By accessing this site, you agree to the site's terms of service. If you need help with the site, please contact us.