Here's my steaming video. You can see the vertical wand position and "boiling roll". In this case I'm using a 4 hole tip.

"Disclaimer: All troll-like comments are my way of discussing"
Top

Marshall_S wrote:Wondering if the same advice/technique applies to a two-hole steam tip or if another technique is more effective-

actually it's all related to angles and hole diameter. if you have 2 hole steam tip with wide angles then this technique probably will work better. check out these various tip pictures the one with 3 hole and 2 other angled 4 hole tips create better microfoam with this technique (wider holes = faster steaming) and the other 4 hole (bottom left in that picture) & 1 hole tips with lesser angles work better if you aim the tip closer to pitcher wall.
Resistance is futile. You will be caffeinated!
Top

Is it possible with the new silvia to get a full foam milk?
Top

it's not about silvia, it's not about the wand, it's about the steam tip and yes it's possible to get a full foam milk. I also had struggled when I received epoca with 3 hole tip, after lots of frustration and practice you improve and get it to work eventually. ie. the pitcher I used above video is 10oz/300ml one but it's easier with higher volumes. you can get smooth microfoam suitable for latte art, either thin or thick microfoam depending your stretching time.

actually there should have been a milk pouring part but due to problems with vimeo site, video displays steaming section twice. with 6 ounce rancilio cappuccino cup, result was this 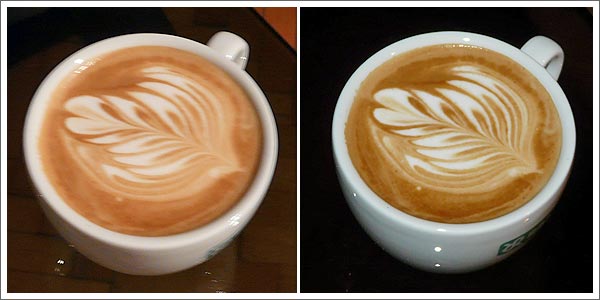 I've made the comments on vimeo. I noticed that epoca has more lasting power than silvia . My silvia needed to start steaming before the light comes out. Anyway i must always aim the wand at the center of the pitcher at straight angle?
Top

blueface asked for a step by step guide showing how to achieve microfoam with a 3 hole tip. I had recorded a video previously, but I guess that was not informative enough, so this is the second one from another angle, pitcher and wand position more visible (10oz/300ml pitcher, rancilio 3 hole tip, 200ml cup, single basket, beans brasil diamond boa vista 8 days old) 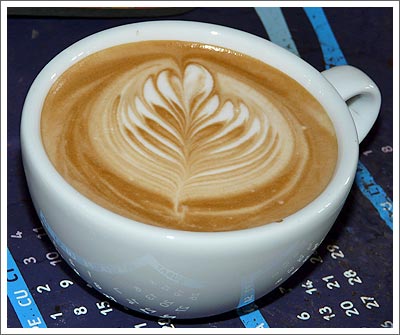 cubanero, epoca has 3,9 lt boiler and yes compared to 0,3 lt silvia boiler, epoca's steam performance superior to silvia's. BUT that shouldn't effect your machine's steaming performance with a 300ml or 500ml pitcher. with 500ml pitcher you can easily pour 2 cappa or even two latte if you stretch enough but you may have problems with volumes above 500ml pitcher (700ml or 1000ml or 1500ml)

look at it this way; you have 20ml volume syringe full of water with a 0,5mm diameter needle, and you have another 20ml volume syringe again full of water but this time with a 1mm diameter needle. apply same amount of pressure to both syringe's pistons, which one will empty first? 1mm one right? now it's same logic with your machine, there's "x" amount of steam in your boiler, turn on your steam knob all the way, steam rushes to wand, if you're using 1 hole tip with 0,9mm diameter then your boiler will empty in "t" amount of time. again "x" amount of steam in your boiler, but this time you're using a 3 hole tip with 0,9mm diameter each then your boiler will empty approximately --eliminating all other factors and theoretically speaking-- in "t/3" amount of time. how this will effect your steaming? "speed" you'll be steaming faster compared to 1 hole tip. lets say with 1 hole tip you're reaching to 140-150F in 45 seconds, with 3 hole one it will take 15 seconds. if you want to reach to 140-150F in 45 seconds with a 3 hole tip then your tip's hole diameters must be calculated and reduced in size accordingly. Also I believe this speed issue is the main reason why rancilio engineers changed it from 1 hole to 3 hole, not to drive people crazy

In the end you'll be using same amount of steam again but with 3 hole tip you'll steam faster, your espresso will sit aside for less time etc. besides you should see their 4 hole tip which has 1,9mm diameter each! even with a 500ml pitcher you just turn steaming knob on, count 1-2-3-4-5 then turn steaming knob off! thermometer can't reach to its speed, now that one drives crazy till you learn how to steam properly. you have max 10 seconds to control everything.

lets say you have 2 styrofoam cups full of coffee, a chopstick and a tea spoon. you put sugar into your cups. try to create whirlpool using your teaspoon with one cup and with the other one you'll use chopstick. you'll see with teaspoon you can easily achieve it by stirring in small circles, but with chopstick you'll achieve better (or lets say stronger) whirlpool if you stir in larger circles. same logic with a single hole and 3 hole tip. consider the chopstick as single hole tip and teaspoon as 3 hole tip. with single one you'll get better whirlpool if you aim the tip to pitcher wall with angle. but with 3 hole tip you should hold the pitcher straight, tip must be aimed to center of the pitcher for better result. don't know if you ever used one but the logic here very similar to drinks mixer's/frappe machines' --> http://www.chow.com/assets/2008/11/drink_mixer430.jpg or http://www.papanicholas.com/assets/item ... rother.jpg
Resistance is futile. You will be caffeinated!
Top

I understand your reply and thank you very much. This is very helpful .The problem to me is that i am new barista and i dont have the sufficient experience on texturing milk. A one-hole tip will be much better to me for learning because of the longer time and when i am ready to buy a 3-hole. Anyway my milk texturing looks like yours in your last video(it take me 3-4 months to achieve) but i want a more frothy foam like the foam you put on traditional cappuccino. I was afraid of a malfunction of silvia and now i know that i have just little time for frothing start to end. Even though the overall outcome pressure of 3-hole tip i think is less than one hole because it has not the same area (acreage ) for pressure relief. If you have for example no steam tips you will have the smaller pressure isnt it? If they have the same area yes i agree.
Top

JL Hufford is selling the 1-hole tip for the V3 Silvia here, as well as the Rancilio OEM upgrade kit to convert older Silvias to the new articulating steam wand. Rancilio will no longer supply the 3-Hole tip on Silvias beginning with the container that arrived in the US this week. Some stores may still have ones with a 3-Hole tip.
Joshua Stack
JL Hufford
Top

Thank you so much! I just purchased one.
Susan
Top
← Back •
By accessing this site, you agree to the site's terms of service. If you need help with the site, please contact us.