OK, so I've had a chance to muck around a little bit and I have clear and definitive answers to report. Just kidding; this is just a starting point.

I had been donated quite a good home roast of the Ardi Naturals that we previously reported on here by a HB reader who wanted to donate some fodder for experiments with the decent espresso machine. He can come forward and identify himself if he wishes, but I hope he gets some amusement value out of reading this. Anyway, I cupped it and it seemed not to have any roast defects; it feels like it's a pretty fair expression of the potential of the green. This coffee basically exactly embodies the natural coffee controversy - lots of flavour, both good and bad. It has lots of mandarin and maybe peach type fruit. It also kind of tastes like chewing on asprin. Lots of people love it for its fruit; lots of people hate it for its finish.

Anyway, long story short - I dialled it in and decided that it looked like it performed best at lower temperatures and at 2:1 extraction on the profiles I settled on above. I had intended to pull three flatline temp shots and two temp profiles, but I lost track of where I was at inadvertently stopped the first shot early. So the comparisons are: 87C flat, 90.5C flat, 86C->94C, 94C-> 90C (I set the lower temp to 86, but it didn't make it that low). Here are some graphs: 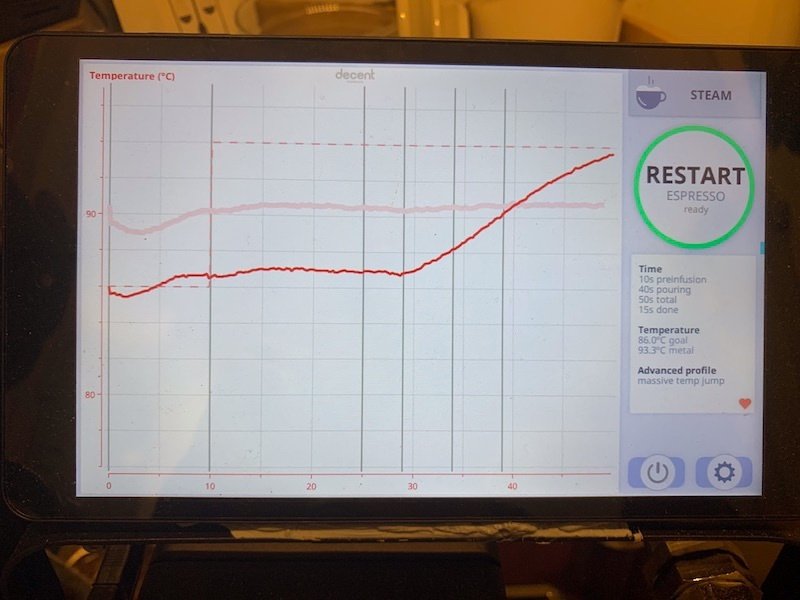 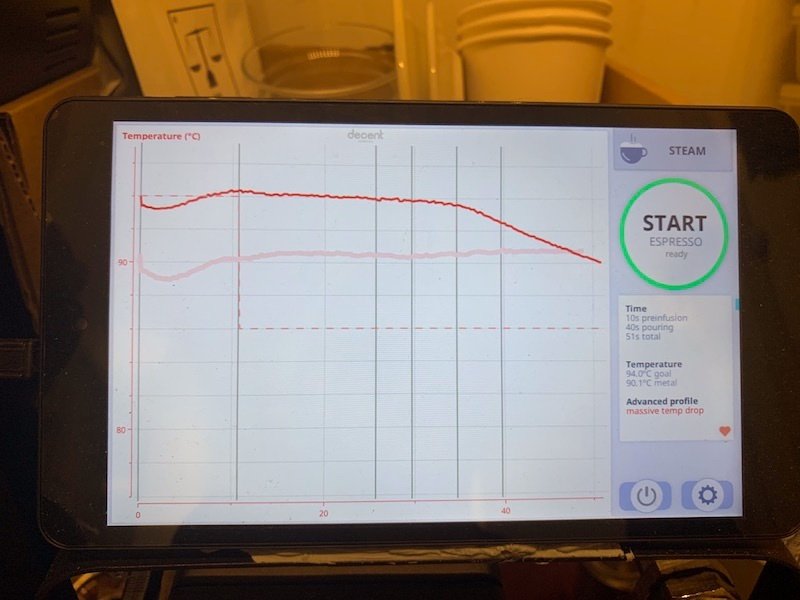 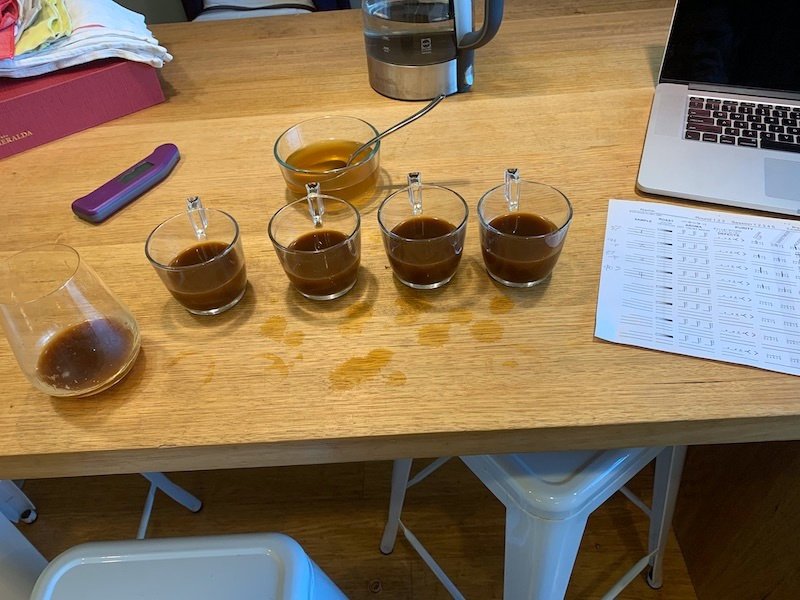 I pulled the four shots into cups labelled on masking tape placed at the bottom, then diluted them with water at about 70C to give me something to taste, since we have already established that dilution makes it easier to taste the differences here.

I tasted through them and struggled to keep my thoughts straight, since the cups changed quite a bit as they cooled. However, the things I felt most confident on saying are that the hotter flat shot and the shot starting at a high temperature and declining were higher in acidity and probably a little lower in body than the other two. My notes have "meaty" on both the colder and the increasing temp shots. The 94C declining temp shot was probably the cleanest of the lot and most expressed the inherent green coffee flavours ... well, the good ones, at least ... it was also probably the highest in acidity and lowest in body. The other three shots were probably more chocolatey/roasty. My thoughts on the cups probably changed at different temperatures, so I don't know how reliable this is, but at least it gives us a starting point.

So, there's lots to critique and improve from this to get us somewhere to actually learning something. Let's make a list of improvements that I, or anyone else who wants to join in, should make in the next investigation:
1. Need to use a coffee that we are familiar with, like and already have a good idea of the optimum brew temp for so that that can be used as the optimum temperature.
2. How do we feel about how the cups should be tasted? We can't really chug 5 espresso side by side at the same temp. Is it better to taste espresso straight out of the machine and not taste things side-by-side? Is tasting as an americano/long black useful?
3. I noticed the peak pressures on some of the shots were a little lower than the flat temp shots. Need to pull multiple shots at each temp to establish what impact absolute temp, or temp profiling, has on flow rate. Is this something we should control for, or do we just accept that this is a dependent variable (I'm leaning to the latter)? If we control for it, how?
4. Would be better to have multiple people tasting.

That's basically it from me for the moment - have at it and discuss!

A few responses on other points:

George, thank you. I bumped the flow rate up to 2.0ml/s, since that's probably more realistic anyway.


another_jim wrote:Luca. Looking forward to reading the 98 to 90, 90 to 98 comparisons. If possible, can you do a straight 94 as a control? The article, if I read it right, seems to imply that the two ramped shots were closer in taste and more vivid than the straight line shot. This seems odd to me; shouldn't the straight line shot be intermediate in taste between the slope up and slope down shots?

I think that there's another side quest here. The assumption that the intermediate shot in temp should be intermediate in flavour assumes that each ml, or each second, has an equal impact on the final result. But we know that is not the case. We know that if you chop a shot up into 5 parts, the first couple of parts are much stronger than the last few. If you graph the derivative of extraction yield, it'll drop off as the shot progresses. So it sort of makes sense to hypothesise that the temperature at the beginning of the shot would have the most impact on the shot, since this is when the most stuff dissolves into the liquid. But this, too, has a linear weighting assumption in it: that the dissolved stuff has an equal impact in the cup per gram. This, too, is nonsense, since the identity of the dissolves stuff is clearly important. All of this can be investigated by tasting the different shot slices separately. However, to do this, I think we need to decouple taste from strength by diluting each slice to the same strength. So what someone probably needs to do to investigate this is to make 5 shots on the schecter evaluspromatic device to collect a lot of volume of each of the 5 different slices (ie. the first shot glass will end up with, say, 30ml, consisting of the first 6ml of each of the five shots), then dilute each of the slices to the same TDS, taste and report back. That would be pretty interesting. Then that exercise probably needs to be repeated at a bunch of different temperatures to work out the impact of temperature on each slice. All of that is a lot of work. Happy to do it at some stage, I guess, but it won't be for a long time.

Anyway, I buggered up this experiment today, in that I ended up a shot short on coffee, so I didnt' get to compare the 94C drop shot to a flat 94C, which is probably pretty important. I sort of ended up with too little coffee and thought that probably 94C would be too hot, so better to pull two shots at more plausible temps. But I may well have been wrong; the coffee seemed to perform pretty well at 94C then drop.

I'm going to leave the temp profiling on the strega and the bianca to y'all to work on if you want; I guess that what I don't really understand about how it would work is that if the thermal mass of the group is very high relative to the small amount of water that you're running through it, wouldn't it always flatten out the brew temp at the puck even if you had a large offset? Also, don't forget that you can go old-school temp management on those machines with the aid of a wet towel to cool the group!
LMWDP #034 | 2011: Q Grader Exam, Brewer's Cup #3, Australian Cup Tasting #1
Top

Hi Luca, thanks for doing this.

But there's a minor misapprehension here ...

luca wrote: ... The assumption that the intermediate shot in temp should be intermediate in flavor assumes that each ml, or each second, has an equal impact on the final result ...

I think people looking for flavors in the last half of the extraction may be on the wrong track. The shorter chain molecules, which have the flavors, extract early; whereas the buffer & body, longer chain, starch-like molecules extract late. So if you want max body, keep the temperature and flow high at the end, in the traditional Seattle style. Your results seem to support this idea.
Jim Schulman
Top
← Back •
By accessing this site, you agree to the site's terms of service. If you need help with the site, please contact us.