I was wondering if any of you curious engineer types with high-end machines (like GS-3) or some of the PID DB units have checked the temp in a styrofoam cup held under the grouphead. I would like some approximation of the temp offset between the grouphead and the approximation of this temp obtained by the styrofoam cup technique. Searching through some of the forums, there are estimates of "a couple of degrees" to more than this.

I'm asking because I own a styrofoam cup/thermometer but I don't own a Scace. I would like to adjust my pstat accounting for the offset in the styrofoam cup, and have a rough idea of the temp at the grouphead.
Has someone with a GS-3 or similar checked the temp loss they get between the advertised temp on their PID and the actual temp in a styrofoam cup? Thanks in advance.
Top

I was getting close to 10 degrees difference when I did testing with my scace & GS3 to compare to a machine that the scace wouldn't fit into.
Top

If you want to get an idea of the grouphead temp, a scace isn't the tool for the job, you'd need to attach a thermocouple to the skin of the group or if its an E61, use an erics adaptor thermometer to get an internal temp.

But if its brew temperature or water exiting the group that you want to infer from a styrofoam cup measurement, thats a bit easier. I don't have a Scace device, but in the same way that a shot cools very substantially by the time it gets through the basket and the stream gets to the cup, I expect that a test of a scace device discharging into a styrofoam cup would result in a large temperature difference. (please anybody with a scace feel free to correct me) My backyard basket thermocouple has all but one hole blocked to approximate a shot flowrate, spraying a fine jet of water out of the bottomless PF, high surface area so it cools substantially by the time it gets to the cup (in the 10deg C+ range). So using a styrofoam cup and thermometer below a scace may not tell you anything useful.

However, I have done a number of tests with a responsive thermocouple installed up against the shower screen and a styrofoam cup and (less responsive) thermometer installed underneath. Having previously compared readings from the two in condensing steam and ice slurry, I had to correct for a 0.6degC offset in the thermometer (possible poor CJC?). The tests all showed that the max temp of the styro cup thermometer reached between 1 and 2 degrees Celsius lower than the average of the grouphead exit temp. One of the plots below. (since the flow rate is essentially constant its easy to average the shower screen temps and get a reasonable bulk temperature of what the water in the cup should be) 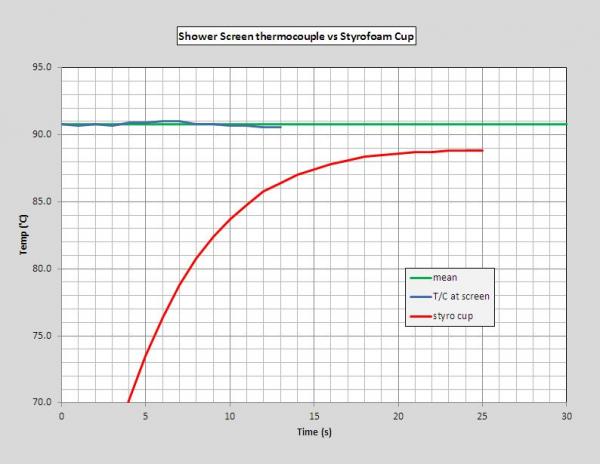 Is this the kind of thing you were after?
Top

Thanks for all the replies. I'm trying to figure how far off my styrofoam cup measurement might be from the brewing temp (exit temp, I suppose).
Top

You lose a lot of heat in that little drop through the air to the bottom of the cup. It works for a rough estimate but you are going to lose 5-10 degrees. Compound that with the response time and tolerance of the device you are measuring with and you can get quite a drop
Dave Stephens
Top

mgwolf wrote:I was wondering if any of you curious engineer types with high-end machines (like GS-3) or some of the PID DB units have checked the temp in a styrofoam cup held under the grouphead.

To the extent that an espresso machine's PID display shows just a "relative" number - one that may be very accurate only when compared to the device's measurements on that same machine - absolute temperatures can't be transferred for comparison between machines.

The measured temperature delta between the readout and an accurate thermometer would therefore vary, even when the measured temperatures are identical. So we can't be surprised that the several findings reported on this thread have been different enough to be of limited use (at best and useless at worst).

That's where a tool designed to be "absolute" - and with measurements taken where the temperature matters - becomes useful by providing a single reference across machines and machine types.
Top

Most of the above data is useful for accounting for the delta between the top of basket temp and the cup. Displayed PID delta to basket is going to be machine (and often ambient conditions) specific. It could be actual boiler temp (higher than in the basket) or could include an offset bringing this delta to approximately zero.
Top

I recently moved from a LaSpaziale to a Linea Mini. I tried measuring temp into a styrofoam cup and get ~175 to 180 degrees using a cheap digital thermometer poked into the cup near the bottom. Temp regulator on mini set to 203. Although I understand there should be a temp drop from the brew head, I was wondering if anyone with a scace can give me a ballpark temp for styrofoam cup measurement with a correctly calibrated mini. A drop of 25 degrees seems high considering others have measured smaller deltas.
Top
← Back •
By accessing this site, you agree to the site's terms of service. If you need help with the site, please contact us.