A Tamper is Too Heavy for Grinder Anti-Popcorn Remedy

Comments similar to the following appear every then and now.

Sherman wrote:Popcorning can be mitigated by placing a tamper, backflush insert, or other similarly fitting device in the throat, on top of the beans.

Since replacing the burrs in the MC4, I've been experimenting with varying effective bean columns above the burrs. On both the MC4 and MXK, using a timer, the doses are more consistent AND, more importantly, the taste is more balanced when the bean effective bean column height is about the mid point of the standard hopper. As the bean column shrinks, the dose becomes more erratic and shot consistency suffers. Bitter flavors are too prevalent, blonding can be hairtrigger and shots tend toward the thin. Adjusting the dose to ±0.1g does not mitigate the defects.

With a heavy weight like a tamper, shots tend toward the muddy and flat.

The math:
Typical 57mm tampers range from around 300 to 500 grams. Coffee weighs about 20g per inch in a 57mm diameter, so the effective bean column height is 15 to 25 inches, much higher, and heavier, than beans in a hopper.

For the MC4, a small water bottle with about 75g works well. For the MXK, with its conical burrs, about 150g.

Note : I always purge the grinder for a second before grinding the dose. These are impressions only on e61s pulling medium roast, moderate ristretto, low dose, mid temp singles, and as always YMMV.
Ian's Coffee Stuff
http://www.ieLogical.com/coffee
Top

I use one of those cheapy aluminum ones. I guess it is time to weigh it.
Scott
LMWDP #248
Top

In the Mazzer and Compak, the tamper sits above the level of the beans, resting on protrusions in the Mazzer or the burr spindle on the Compak, for almost the entire shot. On those grinders, the tamper acts as a lid, not a weight.

The effect of popcorning is to reduce the number of beans that feed into the burrs in a given time interval. This means less of the grinding action is bean to bean, and more bean to burr. This in turn means you need to adjust the burrs more closely for the same grind fineness (i.e. the same number of breaks per bean).

So if your tamper is overweighting the beans, the grind would be coarser than that of a filled hopper.
Jim Schulman
Top

The weight of the device notwithstanding, anything that can effectively span the diameter of the grinder throat will suffice as a lid. I don't claim to have run exhaustive tests on different weights, but can relay from personal experience that I've used everything from the palm of my hand, an empty yogurt container, tampers, to empty pf baskets and hopper lids and have not noticed the difference in flavors that Ian has listed. I have noticed a significant difference in countertop cleanliness, however

That said, my caveat is that this works on my specific equipment. I posit that this may be specific to grinder/machine/bean combos, and encourage any interested parties to explore the matrices of possibilities. Based on my experience thus far, I haven't noticed a significant difference in using different anti-popcorning devices, regardless of the beans used.

another_jim wrote:In the Mazzer and Compak, the tamper sits above the level of the beans, resting on protrusions in the Mazzer or the burr spindle on the Compak, for almost the entire shot. On those grinders, the tamper acts as a lid, not a weight.

Interesting point. However, this does assume grinding per shot.

Then again, the SJ throat is tapered in, right where the protusions jut out (I believe that these act as resting points for the hopper, so that it's not held in place by friction between the conical section of the hopper and the throat). If you were to use a device whose diameter was appropriate to clear only the tapered section of the throat, there would be enough of a gap between the device and the throat sidewall that beans could get stuck.

The red circle contains a threaded hole. The hopper has a corresponding hole, and when assembled, there is a screw that helps to keep the hopper from rotating. 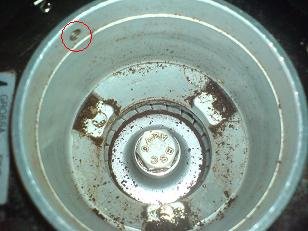 I sold my Mazzers a year ago but if I remember correctly one shot worth of beans sit about even with the inside tabs or the shelf above the burrs. In that case, the tamper does nothing but provide a lid. The tamp will not be setting on the beans. They will all be in the inner void above the burrs or if it does physically sit on the bean column, it is only there for a few seconds possibly about 1/3 of the grind time. Every grinder is different and I have not had a Mazzer for a while so take it with a grain of salt. On my Cimbali's, I just keep 4 or 5 shots worth of beans in the hopper.
Dave Stephens
Top

another_jim wrote:The effect of popcorning is to reduce the number of beans that feed into the burrs in a given time interval. This means less of the grinding action is bean to bean, and more bean to burr. This in turn means you need to adjust the burrs more closely for the same grind fineness (i.e. the same number of breaks per bean)

Don't you think the distribution would change? That's how it tastes.

With a light load, the beans are bouncing like ping pong balls getting bits knocked off willy-nilly with relatively less fine production. One has to grind finer, to limit the size of 'chunks' slipping between the flats, or user more coffee.

With an optimum load, the beans are fed into the maw and the blades work as designed generating fines and 'chunks' in balance.

With an overload, the beans are forced into the maw and the blades smash into more restricted beans and force bean into bean, generating more fines per bean. One has to grind coarser or use less coffee.

I realize my explanation is a trifle simplistic. If something else is in play, elucidate me.
Ian's Coffee Stuff
http://www.ieLogical.com/coffee
Top

I would agree with cafeIKE here. My experience is that when changing from grinding single doses (without any weight) to having at least few doubles worth of beans in the hopper I could make the grind setting quite a bit coarser. My current espresso fineness area stops where it used to start (on Mini-E).

I haven't compared these two methods side by side, but have heard of at least one guy who did it on Rocky and noticed that having no weight made extractions run quite a bit faster.
Top
← Back •
By accessing this site, you agree to the site's terms of service. If you need help with the site, please contact us.