Side channeling solved by accident.

So, I received my first naked portafilter last night and couldn't keep myself from testing it out. I noted significant side channeling during the first four shots I pulled w/ it. On the fifth, my hand slipped while tamping and I pushed the left side of the tamper deep into the puck. I readjusted the puck and pulled the shot to see the affect this slip would have. Low and behold, there was no side channeling and the penetration of the water through the puck seemed to more uniform than the four previously attempted. So, on the next couple of shots, I switched between a nice even tamp and rocking the tamper around in the basket followed by a final even tamp. The second method seemed to produce a much more even extraction. I am using a flat-bottomed tamper on an Andreja. On every shot, including ones with side channeling, the cone was nicely centered. Does anyone have any theories about what is described above or experienced something similar? Perhaps my pre-tamp distribution is off or maybe I need a convex tamper. Thanks

Chris
Shh. Listen. Do you smell that?
Top

Funny you mention that. I have been playing with distribution on tamping techniques for the past month. When I changed machines from my Isomac to the Faema, my shots went to pot. Uneven extraction, side channeling, channel jets shooting me, it was just a nightmare mess.

After several different techniques, I found that a slight rotation of the PF fixed my problems. I still grind and dose the same, but my first leveling tamp I rotate the piston ever so slightly, 360 degrees. That slight orbital compression, light portafilter tap then tamp to pressure did the trick. 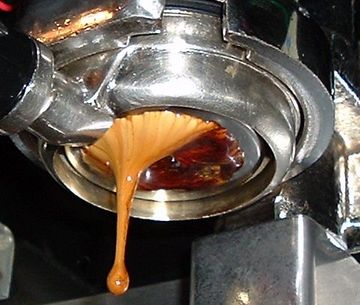 To this just by changing that one small variable


I am looking forward to the tamper road show so I can see how other tampers/bases/baskets affect the extraction.
Dave Stephens
Top

That's crazy, I have been doing that for a few days now and thought it was too kooky to post up (coming out of the tamper swirling closet). I am still playing around with it trying a few different things, its a relief to see someone else doing it. Phew!
Top

I have done the same thing by accident a few times, but never had the naked PF at the same time to see the results. I was actually concerned it might have the opposite results and increase side channeling. I'll have to try this again.

Knokes wrote:So, on the next couple of shots, I switched between a nice even tamp and rocking the tamper around in the basket followed by a final even tamp.

Jim mentioned this in The Home Barista's Guide to Espresso:


another_jim wrote:The classic tamp is a straight down press at 30lbs pressure, followed by a light twist to settle any stray grinds. In Italy, it has become the custom of most cafes to grind slightly finer and use a very light tamp (about 10 pounds) using the tamper mounted on the coffee grinder. Stronger baristas may use heavier tamps, while some use a nutating motion (rolling the tamper in a motion like a flipped coin settling) to accentuate the pressure towards the edges of the basket. An alternative to the nutating motion is using a convexly curved tamper, which accomplishes the same thing.

I only mention this because it's so hard to work "nutating motion" into casual conversation. Although I love the sound of the phrase, I've never tried it, figuring that it would be too likely to compress unevenly. Now I've got the excuse to say "Step aside and let me show you some nutating tamper motion" tomorrow at Counter Culture Coffee's regular espresso lab.

HB wrote:I only mention this because it's so hard to work "nutating motion" into casual conversation.

I know Dan- I'd be afraid people would think you were making a reference to something obscene...

Let us know how the new "dance move" turns out for you at CCC tommorrow!
Top

Nutating motion. Wow. It's such an interesting term I had to look it up. The quick references I found to "nutating motion" made my head hurt so I now won't question what I was doing, I'm simply doing a nutating motion.

When I do it, I hold my tamper (Flat bottom Reg Barber) as I always have, then I use the outer circumference of my tamper to "crush down" the outer circumference of my leveled grinds with a rotating on a off-camber central axis motion (maybe a poor description). I do it with quite a bit of force, approx 20lbs and roll it around 3-4 times, then I take out the tamper and visually inspect the circumference (only to trend it). At this point I diverge down one of two paths; I either reset the tamper and tamp straight down with 30lbs, or I redistribute the grinds with my finger so they are level and then reset the tamper and tamp straight down with 30lbs. I'm still playing around, and haven't come to a conclusion yet. I like playing mad scientist with it, but only because I am seeing some interesting results.
Top

I agree with you Chris, when I first got my NPF I was getting bad geysers and tried everything I could find re distribution on this site to fix it and a careless read of the NSEW distribution led me to tamp in a rocking motion of NSEW so I don't so much nutate as rock followed by a rotate (yes I understand a lot may find this kind of kinky) but it did work with surprising consistency. I thought this was just another rule I was breaking.

Um, I've improved my uniformity by lightly pretamping with the bottom of the plastic cup I dose with, before I really tamp.

Ok, before any professional baristas start making the sign of the cross at me - let me beg your indulgence.

I own 3 triple baskets, which live on top of Anita and are nice and preheated when I get to them in the morning.

I dose directly into plastic cups dixie cups from my grinder. Each plastic cup is dosed by weight. I transfer the ground coffee from the plastic cup into each basket (which is not yet inserted into the portafilter) and since it all doesn't fit perfectly, end up kind of making the coffee grounds fit nice and evenly with the bottom of the plastic cup.

It's a pretamp, as far as I can figure. If I do it uniformly, I get no channeling, or side spritzing.

Then I load the basket into the portafilter, tap the side of the portafilter with my tamper to further settle the coffee, REALLY tamp (do my cooling flush for the first shot) and make my shot.

I dunno, it's weird, but it works.

I have only had to do this on my Faema, which is a rotary pump with no preinfusion. On my Isomac and lever machine I use the traditional packing tamp (10-15lbs), tap tap, full tamp and no pressure quarter twist. But on this machine with this basket with this tamper (58mm Reg HB convex SS base) I get the best results by doing a light (10lbs?) packing tamp and very light rotating tamp, once around, tap tap and full tamp.

If I try the same tamp on my Isomac, I get a dead spot in the center from presumably over tamped center.

Nuntang,,,Nuntang! Just wanted to say that. That is about as good as telling someone you blend coffee and use Mysore nuggets extra bold in the blend.
Dave Stephens
Top
← Back •