Although the title says "Advanced Barista Training", they initially assume only basic espresso preparation knowledge. As you'd expect, it demonstrates some awesome pours and how to execute them. The segments rotate several times through the cadre of baristas. In addition to explaining the movements behind the pours themselves, they share insights on espresso prep in general along the way. The presentation is fresh, lively, and natural. Outdoor free-format roundtable discussions of their thoughts on espresso and coffee culture are interspersed among the mini-tutorials. And while you may get the idea that everything was one fluid motion from start-to-finish, the outtakes at the end put that notion to rest. The behind-the-scenes antics were worth a few chuckles, especially Austin's mock introduction of the DVD's "hard core" section. There are a total of 14 chapters dividing the DVD; the last one is "slo-mo" replays of the pours shown earlier.

On the flipside... while I do recommend the title, it would have been even better if it had also shown what happens when latte art goes south -- and explained why it occurred. For example, too much air, starting to pour the design from too high, and so on. They mention some of these problems in passing, but don't show them. Systematic coverage of common errors would bring the topic back to what learners are (unfortunately) seeing firsthand. And hey, if they recut the production and need someone to help with demonstrations of what not to do, call me!

This is the first latte art DVD reviewed on Home-Barista.com, but it nonetheless merits a "must see" rating for anyone wishing to learn the basics of latte art and to later push it to the extremes. 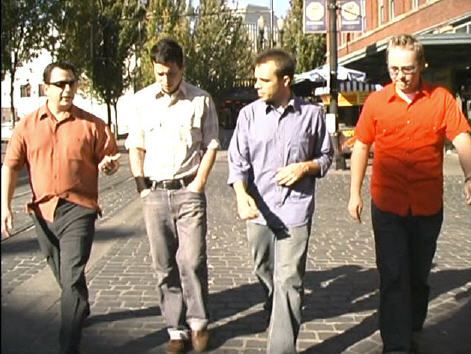