Thanks for the information from a fellow HBer Pazu (who is also moderator of a Chinese coffee forum) in Hong Kong, here is an excellent source for the Reneka Microsieve from the Netherlands. The proprietor Philippe has quite an interesting career path to coffee, not to mention dedicated personal service and a great source of coffee information in Europe.

If there is no hiccups at the US customs, it takes about 10 days to arrive in the US.

Originally Philippe accepted bank wiring, but he is fully set up to accept PayPal now. This should make international purchase much easier.

Somehow his website does not show up with google, but here it is: 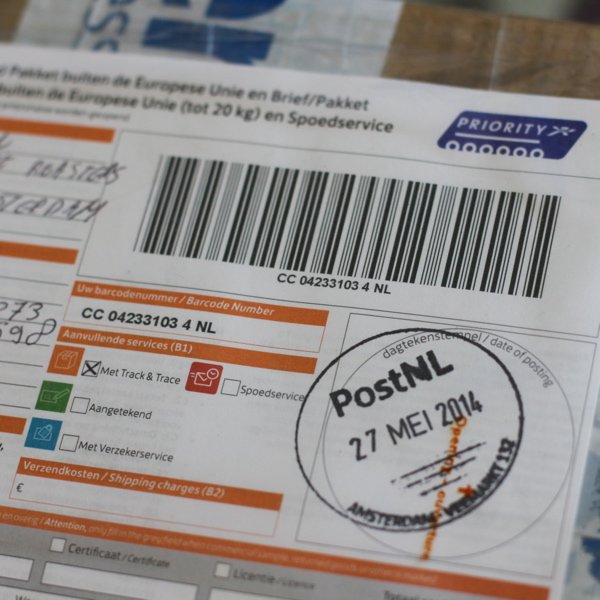 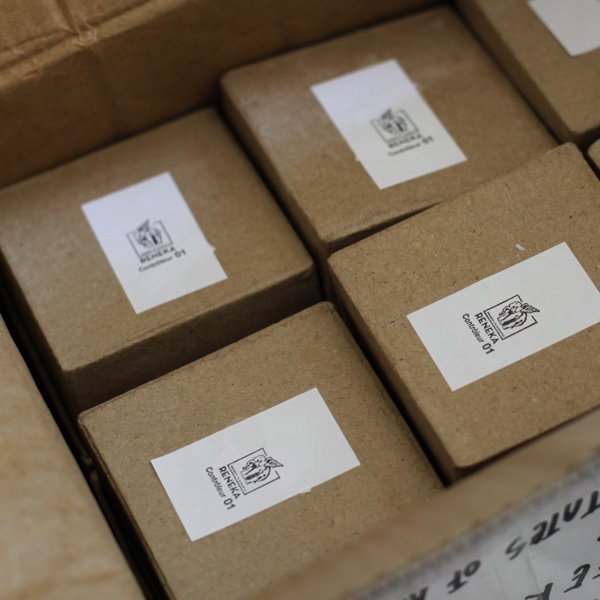 The picture below is from the Micro Sieve and a generic basket. Both about 15 grams, same grind setting on the Versalab M3, pulled on a QuickMill Achille. The coffee is washed Guatemala gesha 6 days post roast, 2:30 into first crack. The picture was taken about two minutes after pulling the shots. Notice the persistence of crema on the left. 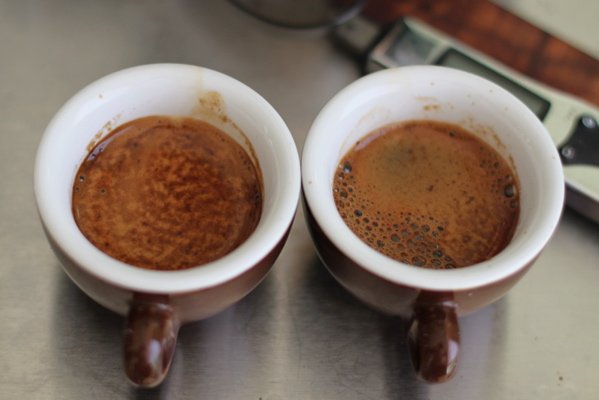 Color me deeply mottled and impressed.

My first roast on Big Blue ended up being an espresso blend using the May RLT Bolivian as the majority component.

The shots pulled buttery smooth with incredibly deep, velvety crema, mouthfeel and a wonderful softness about it. I'll do more testing tomorrow, we're off to watch the Giants win another one.

Second shot after a gusher on the dial in ( I had my grinder torn apart). 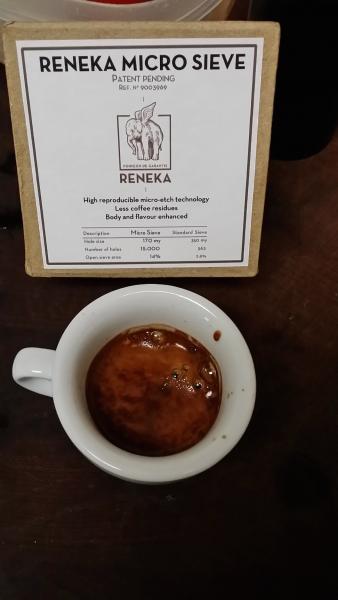 I had to go to 16g but only because this blend seemed so voluminous and fluffy, I couldn't dose 17 or even 16.5.

This went into my girlfriends capp. I made one exactly like it right after. I'll do some comparison shots later on.This basket is impressive and it really heightens the smooth, creamy softness in a shot. It feels more like a traditional level shot, but I liked the flavor separation. 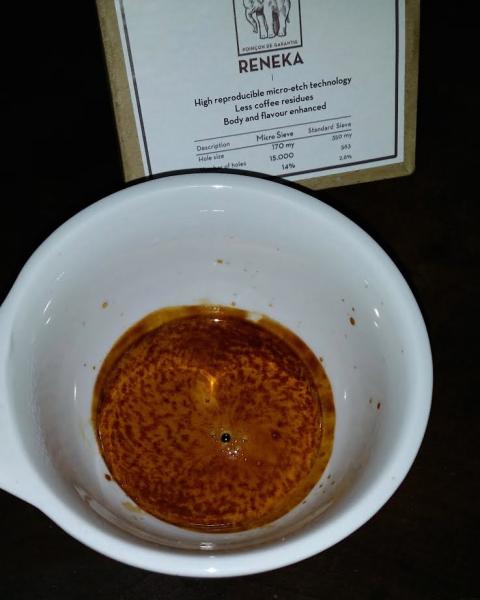 Here's a somewhat bad example since both shots were rather long and uneven. Same dose and grind (16.10g and 16.06g) flow was far faster on the Reneka and can clearly be seen as such, but like I mentioned previously, this very well developed espresso won't permit an updose. I'd rather try a brighter SO that I can dose higher in the basket. 16g of this blend is likely just clearing my screen. 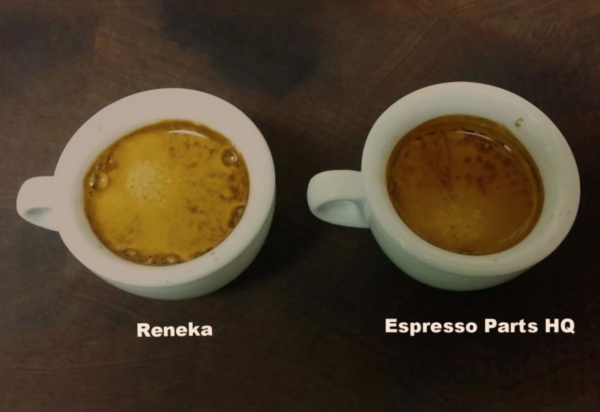 I set them down for the photo, and turned around, having my girlfriend hand me one blindly while I kept my eyes closed. The taste was so similar that I doubt I could distinguish one from the other over several samples consistently, or even pick a favorite, but the HQ seemed maybe slightly clearer, or brighter on the finish ( but I'd attribute that to the fact that it's more concentrated than the Reneka shot). I'll head back in the kitchen in a few and pull some proper shots on the scale and re-assess with tighter shots, then again with switching it up to one of the stellar Ethiopians we're chatting about in the Roasting forum.

An interesting aspect of these baskets that I don't think have been mentioned before is the wide holes really permit much closer assessment of pre-infusion ->extraction to cut my pump.
Top

I have to assume these tests have all been preformed with a naked/bottomless portafilter. Would anyone care to post results with a spouted filter?
Top

My impression of the basket is that it functions a lot like the VST 15. It takes a finer grind than standard, or HQ baskets; and is not as deep as Faema, LM, or Cimbali double baskets; but shallowish, like Rancilio, NS, and Bezzera doubles. I liked it on my Elektra Semi, but not so much on my Strega, which requires a fine grind even with high doses. I'd say this is a very good choice for those want to use finer grinds at lower doses on pump machines, i.e. think of it as a third wave 1.5 basket.

Also, the lip is a little rounder than those on most baskets, so the PF won't turn into the group as far. If you like these baskets, you may either need to use more turning force or to file the ears of the PF.

The design is unique for baskets, using a two layer base, with a fine mesh screen over a large hole grid, similar to some of shower screens on groups. I have not checked if this produces a shot with fewer particulates, which it might. It does not see to harm the crema.
Jim Schulman
Top

another_jim wrote:My impression of the basket is that it functions a lot like the VST 15. It takes a finer grind than standard, or HQ baskets...

I jumped on board to see if it would allow us to pull Strega shots at coarser grinds, and it seems the inverse is true.
Top

I haven't put this basket thru it's paces like what I've read elsewhere from stock Strega's, I always tend to have my pre-infusion pressure dampened quite a bit, so it's not an apples to apples comparison. However earlier Thursday I did do two shots at full pump pressure and two with the way I fiddle with it at lower pressure. I know I haven't explored all that this basket is capable of, but I really have to wonder what the original posters on that (UK?) or French? Forum were thinking when they spoke of up-dosing this basket with coarser grinds. Anything over 16g of 4 different coffees/espresso blends I've tried and that seems to be its upper limit dose wise.

I find impressive flavor separation relative to the mouthfeel versus what I'm traditionally used to with my other baskets, but that isn't blind and certainly isn't valid, it's just a vague perception that I should explore and elucidate further.

At the end of Thursday afternoons little shot pulling session, I swapped out my flat bottomed tamper and will give my Euro Curve a try for the first time in a long time on the next go-around. The large perforated bottom of the basket certainly appears to bulge a bit more than standard baskets.

I should look thru that other forum and note whether anyone has noticed premature failure of the screen. It certainly looks like an extremely well made product, but the thought did cross my mind.
Top

I am finding that it can take a finer grind than VST. Curved 58mm tampers appear to be better for this basket.
Top
← Back •
By accessing this site, you agree to the site's terms of service. If you need help with the site, please contact us.