I stumbled upon an article a week ago that turned my espresso experience around.

Part II where he mentions that in order to extract espresso properly the tamped coffee in basket must nearly touch or touch the dispersion screen made a lot of sense... i tried and ever since had 100% success rate -- the most amazing shots i ever had:

This 'enlightenment' made dosing variable very simple to manage -- fill as much as it takes to get very very very close to dispersion screen or slightly rub it when PF locks in. If pour is slow/fast adjust grind (making dosing amount changes if needed to get proper volume again).

I've tried different doses before, but it gets confusing when u don't have a clear goal in mind, and i mostly focused on trying to maintain some constant weight... I'd probably hit correct volume/grind by luck sometimes and not realize what's wrong later as settings changed to accommodate bean freshness or different beans.

Perfect shots one after another for a week, with explosive flavor that gives each coffee a personality & starts making the descriptions read on sweetMarias make sense.

It's my latest tool for that 'sweet' shot... extra-virgin-espresso-oil anyone? 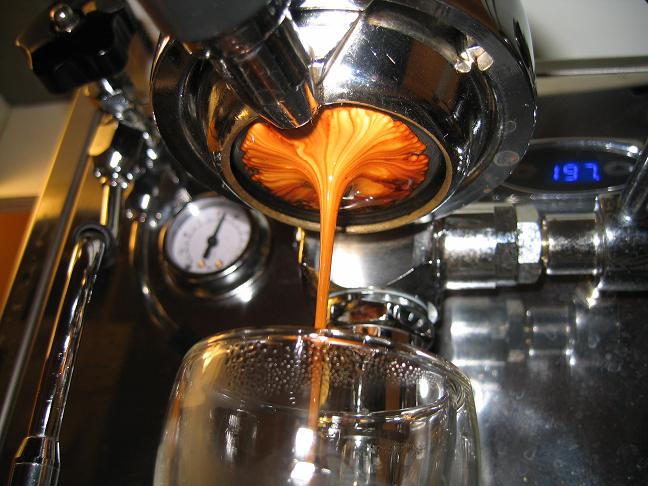 For every authority, there is an equal and opposite authority:


Marino Petracco in [i]Espresso Coffee[/i], 7.5.4, Illy & Vianni, eds wrote:During expansion, wet coffee grounds exert a pressure comparable to the wooden wedge once used to split marble ... On account of this behavior, an empty space is left above the ground coffee cake inside the extraction chamber. The actual expansion of the coffee cake varies by blend, roasting degree, and dose, and determines the minimum headspace (around 5mm to 6mm) needed to prevent over-compaction.

I found, when I had an E-61, I got my easiest shots, and usually incredibly tasty shots, when the puck was close to the screen, but not touching it. After some reading of older Schomer articles I found a couple evening, I experimented with the coffee literally scraping/mashing the shower the screen while locking in. I was surprised to not see the shot channel and spray all over, but the results were definitely not 100% centered, constant pours, and the tastes were on point with the looks.

Ive heard Mark Prince say, well, read him say, in more then one article, that e-61s don't take well to updosing at all... Now, one could say that, he's used the Linea he's had for a while(and now the GS/3), which allows to coffee to basically be smashed into the shower screen.. But.. I disagree that E-61s dont like to be updosed. One example I remember in particular(might've been on a Flickr Comment), was about the Synesso 14gr ridgeless, where he noted he could do 18-19gr without a problem on his Linea, but that on an E-61, 16gr was the limit. I routinely ran the 14gram synesso basket at 18grams, with great results. Mark is someone whose opinion I put pretty high on who I listen to about coffee, but, I disagree here. I thought 16grams in the Synesso 14 was actually too much headspace. But, in the case of my opinion vs. his, Im not about to try and prove him wrong, just that I preferred a different approach.

Back to the OP: I kept a bunch of baskets, but the four main baskets, were the Synesso 14 and 18, and the Faema 12 and 14grams. That allowed me to use 15gr, 16gr, 18gr, and 20gr shots, in the proper baskets(smallest dose-smallest basket, and so on), and get the headspace to be pretty darn close, and the results close as well. Having the puck close to, but not touching the screen, worked the best for me, but 18grams didn't always work the best, hence the smaller faema baskets.
Artisan Micro Roaster, Peekskill NY
www.BigBangCoffeeRoasters.com
Top

It varies, a lot, between machine and coffee. For instance, take any elektra machine, fill the basket so the puck touches the screen and you will get a melt down shot. I use a triple basket and dose down to 16 G's (give or take a few grams depending on the coffee). That gives me about a quarter of the basket empty. In some E61's that works, in others it does not. More importantly, not all coffees work at high doses. I have several baskets so I can vary dose while retaining ample headspace. Glad it works for you but I would not quote it as gospel.
Dave Stephens
Top

There is virtually no methodology you can come up with that won't work for at least one person. For example (and not at all referring to you, Ben), if someone is having distribution problems, "overdosing" in this way would allow the expansion of the coffee to compact itself against the screen further than normal tamping would accomplish, and COULD possibly help overcome the channeling they had been experiencing. A similar scenario could also be said for a grinder that produces poor particle-size distribution, probably as well as (to a lesser extent) too-coarse of a grind.

We can take a theoretical alternative path and say that this method might work, and be quite effective, depending on the specific machine/basket/grinder/roast/blend/XXX being applied in the scenario. On some machines with small(er) baskets, cramming all the coffee in that can possibly fit would give a richer extraction. With my machine and the baskets I am currently using, I would have to likely have to dose, tamp, and dose and tamp again to accomplish this which would create another set of problems.. I have been filling the basket, leveling off across the top with a straight edge, and tamping.

To paraphrase:
"Dose this way."
"If I could dose THAT way, I wouldn't need the talcum powder."
Espresso! My Espresso!
http://www.EspressoMyEspresso.com
Top

I just want to say again that I am still waiting to see the ridiculously elusive perspex portafilter video. With no apparent hope of that ever happening, I am inclined to agree with the idea of what the few, proud viewers have claimed as a result of seeing that video, which is that puck expansion occurs when pressure is relieved, and all the claims about the need for headspace or a lack thereof are the result of quirks in machines (e.g., water dispersion, screen shape, presence of a center screw, water debit) and techniques (e.g., basket used, dose, preferred brew ratio, distribution method), if not also coffees.
Nicholas Lundgaard
Top

thanks for the feedback - i was hoping i hit on a formula more people use, but sounds like there's great variance (as always;)).

i'm just crossing fingers i may have found a technique that works for this machine -- focusing on constant ~0mm headspace, and letting dosed weight & grind vary as needed.

we'll see.... 1 week success is way too early to celebrate

shadowfax wrote:I just want to say again that I am still waiting to see the ridiculously elusive perspex portafilter video. .... I am inclined to agree .... that puck expansion occurs when pressure is relieved, and all the claims about the need for headspace or a lack thereof are the result of quirks in machines......

I think that the biggest problem which would be "universally" observed from "overdosing" is the possible disruption of the integrity of the packed coffee when it hits the screen or center screw when initially locking the portafilter in place.
Espresso! My Espresso!
http://www.EspressoMyEspresso.com
Top

Randy just took the words right out of my head...

As far as I have observed, it is the only real problem with lack of headspace (... but what do I know?). On the La Spaziale Vivaldi it is a serious problem with that protruding Hex bolt head!

If the coffee swelled like the proverbial wedge mentioned above, we could probably not remove the portafilter until the puck had dried, because of induced friction.
LMWDP #330

Be thankful for the small mercies in life.
Top

This thread provides a rare opportunity for me to contribute in an actual brewing discussion on HB so I'm seizing the moment.

Akin to Randy's earlier observation about some machines with small baskets, I consistently get my best results when I dose to the extreme with nearly every coffee I use. Literally filling the basket so that when firmly tamped the coffee is little more than a millimeter from the rim.

These machines have a slightly concave shower screen. (Think RB American curve reversed for approximate degree.) I do wind up with a faint ring representing the outside edge of the screen on top of the puck, but no screw impression (it's countersunk) and not more than a very small amount of coffee on the screen itself. To my knowledge the XP 4030 doesn't have a true three-way solenoid but it does have a pressure release system of some kind that mimics the desired end. This doesn't work particularly well with the stock pressurized baskets but performs nicely with standard replacements at this dosage level, with no portafilter sneeze and dry pucks.

I have no idea as to whether the coffee ends up on the screen from expansion during the pull or as a result of the pressure release. But I don't wind up with much of a screen impression on my pucks and no evidence of channeling, to which I have to pay much more attention when dosing at standard levels.

Built and pulled in this fashion I get shots that are more uniformly rich and tasty than with any other dosage and have much more control over shot parameters in general.
All the coffee in Ethiopia won't make me a morning person.
Top
← Back •
By accessing this site, you agree to the site's terms of service.