The purpose behind the grouphead temperature monitoring scheme is, for sure, not to dictate any particular methodology as regards a hx machine flushing regimen. Now, that said . . . A good experiment to do with any hx machine is to do a extensive flush (say, to 185) and simply watch the response of the temperature monitor. If you're using a thermometer, you should see something very similar to the graph I previously posted which was data very carefully extracted from a video I made. Why I stopped the flush when I did is beyond me at this point but the basic shape of the graph would not change.

A 200 F group temperature on the Isomac will get you a pretty hot shot - like around 205-206 using a long flush and a long wait.
Skål,

Thanks Mike. I've been using a flush and go, but my wait time has been about 25-30 seconds normally.
Top

I've been trying the flush and wait method, and I like it a lot. The flavors of the coffee seem to be more balanced and tastier..i wonder if i was way off on temps with my flush-go method.
I don't care much for the waiting part though:)

Question, i saw this applies to the Anita, but generally speaking, for making more than 1 drink, would i just wait until the group temp is back to 196 or so after pulling the 1st shot?

On my Isomac, if i start the 1st shot at 195, when it's done, the grouphead only drops to about 195.5 before it starts climbing again, and if i pull water at that point, i can hear it flash boil when it comes out of the group...so i'm thinking that would burn my coffee..

I don't care much for the waiting part though

Then, instead of flushing to 185, which is really a nominal temperature because it is tough to "hit it on the nose", try 187 or 188. After you brew the first shot, do a 2 second screen flush (or not) - it depends on just how fast you want that second shot.

Eric, i flushed to 190 on one pull, and it was much less waiting time..i'm still playing with it.

Here is a chart that I did about 3 years ago. I do believe that an Isomac would be similar but not necessarily identical. In answer to your question - yes. 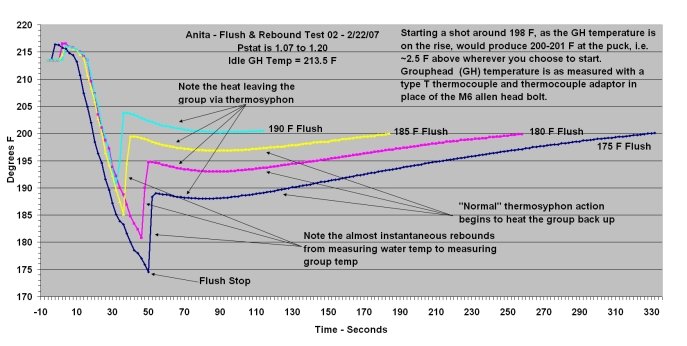 While it is very probable that a prosumer machine like ours could be tuned to deliver consistent shots over, say, a 90 second period (shot 1 start to shot 2 start), a more realistic time would be about 135 seconds.
Skål,

I just used your chart to pull multiple shots on my new Andreja using the Flush 'n Go method. Your numbers work well for me so far. I have to wait and see, but so far so good.

Thanks for posting this chart.

Erics, thanks for everything that you have done and posted on the subject.

Glad to hear that this is working out for you. I have been using this on a daily basis since I developed it. It has really helped me to improve my shot-to-shot consistency. Hopefully it can do the same for you.
Top
← Back •
By accessing this site, you agree to the site's terms of service. If you need help with the site, please contact us.