These are very interesting findings for a new HX owner like myself. I look forward to your additional results. Thanks
rich
Top

Here is a chart that I have compiled over the last few days with the scace. The measurements are based off of a 10 second recovery time. The numbers in the chart are the target end of flush temperature. I can consistently hit any brew temp between 198F to 203F under pretty much any condition. This is assuming the machine is fully preheated and allowing a minimum of one minute between shots. I have tested and verified these numbers off both a 1.0bar and a 1.3bar pressurestat settings with identical results. A typical shot begins with the Hx hump temperature peaking about 1 degree fahrenheit higer than the target brew temp. The target brew temp is then achieved around 15 seconds into the shot. From that point, the temperature will slowly drop the remainder of the shot, but will remain within 1 degree of the target temp. I have spent hours testing this chart and it is very reliable. I have tried some of the other methods of flushing as well and this method is easily as reliable as any other for me. I'm curious if some form of my chart would work for other E61 HX machines. It may need to be tweaked to account for slightly different thermodynamics, but I would imagine it would work. Comments? 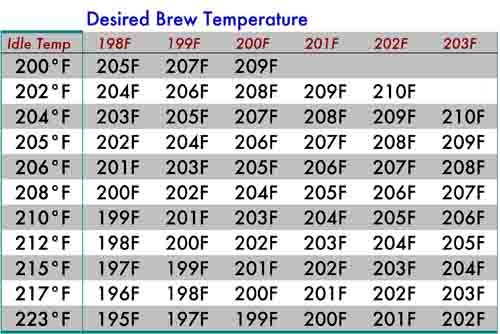 That's a lot of work and I'm happy that your confidence level is high and THANKS for sharing. The next task should be to pick a very finicky espresso blend and see if YOU can discern any taste differences with temperature.

Another alternative would be to run the test at random(?) intervals (2,4,16 minutes) to see that you can duplicate YOUR chosen temperature. Stopping a flush at a predetermined temperature can be a little tricky.
Skål,

erics wrote:Another alternative would be to run the test at random(?) intervals (2,4,16 minutes) to see that you can duplicate YOUR chosen temperature. Stopping a flush at a predetermined temperature can be a little tricky.

That's exactly why I decided to make the chart. The longer the machine has been idle, the higher the group temp will be. The chart compensates for this with a lower flush temp. I have tested every random interval between shots that I could think of. This include all that you mention, to heavy continuous duty, to several hours between shots. You are correct, it can be a little bit tricky to stop at an exact temperature. It will keep dropping after the pump is shut off, but the temperatures stated are where the pump is cut. You do need to be quick, I'd say within a second, but it is manageable. I've been pulling a SO Kenya from Terroir this week and I'm already seeing major improvements in both overall quality and consistency.
Top

Just wanted to second fergus' comments---thanks for the detailed information! I just got Eric's thermometer adapter for my Isomac and am getting used to pulling shots with some more information at my disposal. I'm trying to avoid doign the flush-n-wait technique simply because i usually only make 1 cappa in the morning and a double shot after lunch, so I don't need much shot-to-shot consistency. I know the grouphead temps and such are machine specific, but thanks for sharing!

Mike, nice chart. Did you record what Eric's adapter is reading versus the Scace during the brew (as opposed to the flush-to temp)?
Top

thanks Mike. I'll have to do a search for the flush and wait method. I've seen it mentioned but haven't read about it.

I do want to rent a Scace though..
Top

So basically for flush and wait i flush to well below target temp, and then wait until the grouphead shows the target temp?

Yeah, for the flush-and-wait you flush the group well below the brew temp then pull the shot when the thermometer is a few degrees below the brew temp. The few minutes after the flush will heat the water in the heat exchanger to over brew temperature. This super-heated water then cools back down to brew temp when it hits the group which is cooler than the desired brew temp. With the flush-and-go method, the group will be a few degrees hotter than the desired brew temp. The HX water is cooler than the brew temp and heats back up as it hits the group. The end result is essentially the same with either method. The reason the flush-and-wait method is simpler is because the group temperature is controlled via the flush and is consistent with every shot because you are over-cooling and waiting for the correct brew temp. With the flush-and-go method the idle group temperature will be different depending on the time between shots. The idle group temp determines the flush length and necessitates a chart to obtain consistent shot temps under any circumstance. Both methods are equally valid, but I personally prefer the flush-and-go method because it works best for my personal routine. What works best for you is something you will have to figure out for your own routine.
Top
← Back •
By accessing this site, you agree to the site's terms of service. If you need help with the site, please contact us.