My attempt - Silvia and Rocky, the video - HELP NEEDED!

1) Why does the boiler light go on half way through steaming the milk? Is that ok?

2) My Silvia seems to make a funny sound at the end of the 25 second espresso pour - this started happening only recently. What is that?

Yes, I know that running out of beans half way through the grind is bad. Sorry!!!!

Thanks for your friendly tips!

Jon, as you may know I responded to your video via a reply to our previous emails. I'm going to post it here too so that I can be debunked and/or so some can add their 2 cents as well.


I paused your video to make each observation as they came to me. You might want to watch and read this at the same time too.

1) For starters I usually hold the steam wand flush against the side of the pitcher and introduce air by slightly submerging the tip. After adequate air is introduced you can bury the tip and circulate until you get the desired temperature.

2) The light turned on because new water has been replaced into the boiler the temperature drops and element popped back on which is indicated by the light. When I steam milk on the Silvia sometimes I will stop steaming for a few seconds and let the temp raise back up. When the light goes off you can purge again and continue.

3) The milk doesn't look too bad. You can tap the full flat surface of the steaming pitcher bottom on yoour counter to get rid of big bubbles. Our 4 hole steam tip for Silvia helps with micro-foam too.

4) OK with the Silvia purge the group after steaming until the boiler element light turns on again. After steaming the boiler water is much hotter than espresso extraction should receive.

5) Nice air tight bean storage... Great. You can keep a half to quarter of the hopper full without wasting the beans.

6) Tamping... Use your forefinger and thumb on the piston base for pressure. For most the handle keeps it in your hand and helps level most pressure should be directed to the base. Also try tamp - polish - tap side and wipe portafilter clean - tamp - polish - insert.

7) its tough to do but you need to keep your milk warm and circulating so spin it around the pitcher now and again so the foam doesn't separate.

The shot was pretty nice, my previous email will help with that so you can get that syrupy stuff everyone wants.

The sound you are hearing is the discharge of pressure through the three way valve. It is a little louder simply due to the finer grind you have started using. The timer is cool, but my hope is that after a bit you ditch that and start tasting the coffee at different times. The rules are meant to be broken, so go for it.

Also, I should mention that if you tap your right foot and hum the hokey pokey, while steaming milk you will find that you can pour latte art. This is how Dave does it, I'm sure

You Tube is great, thanks for taking the time to put that together.

Ah, cool. Terry - that sound worried me. Glad it's normal.

Great suggestions. Thanks Dave and Terry!

1) When you are steaming the milk with the top slightly submerged, do you move the pitcher around at all?

5) Are you saying that I should leave the Rocky 1/4 to 1/2 full? Isn't the Rocky's hopper less than air tight? It would take me days to use all those beans...

Your video is great in many ways.... it is full of things that at one will do when they are just getting started. Let me refer you to this thread real quick, where we are discussing whether to steam first or second, here are my steps:


jesawdy wrote:Heat Silvia for 30 minutes
Heat final cup (not shot glasses) either in the microwave with water or via hot water wand (I find hitting the beverage button on the microwave is a good option for me right now, I can move on to whatever is at hand and grab the cup, dump and pull when I am ready)
Grind into PF, tamp, polish
Flush grouphead with a tad of water
Lock in
Grab that heated cup, dump and dry
Pull DIRECTLY into the heated cup (if you don't know when to stop, either watch your naked extraction, time, or pull to a predetermined volume via sight... throw 2-3 ounces in an identical cup for a visual reference, you will learn to use a combination of all three indicators of when to stop)
Set your crema-laden cup aside
Hit the steam switch to start heating for steam (the Silvia boiler is huge, I would think you should be okay, but you may wish to top up the Gaggia boiler)
Flush water out of steam wand
While heating to steam, I pour milk into a pitcher stored in the freezer, and leave it there until needed
I also set to cleaning the grouphead with a flush, brush and a PF wiggle, at the beginning of the steam heating
Wait for your steam temp light to go on or off as the case may be
Flush water out of steam wand again
Steam your milk
Pour into the final cup ON TOP of your espresso, you should still have some crema left, just not as much
Enjoy!

Okay, as Dave said, you need to pull your shots first and steam second. EDIT - I misread Dave's post. I prefer to pull then steam, but I have a PID. Seems as though Dave likes to steam first even with or without a PID.

Your shot building was fine, especially for just starting. Refer to the dose and tamp techniques thread to get some ideas on improving your distribution and tamping. Also, you may be interested in the WDT. When you tamp, you may want to get your elbow up, so that your forearm is perpendicular to the counter surface.

For steaming, you are working the pitcher real hard up and down, see this and this for help.
Jeff Sawdy
Top

Well I actually steam first too. I just store the steamed milk up top and pull'r down now and again to swirl it around so the milk doesn't separate.

Then I FLUSH. Flush that group and boiler until the element light flips on. Grind, dose, tamp and when you are done with that the light will have turned off. If it hasn't wait until it does then pull your shot immediately...

I actually surf mine this way by forcing the element (and light) to kick into gear then pull my shot.

I seriously forgot how much there is to consider in this espresso thing. Jon I promise you it will all come naturally very soon.

Now don't go and PID your machine yet or anything but I wanted to add something about the PID'd Silvia that has to do with the above.

One thing I am really enjoying about the PID'd Silvia other than the consistency and control is the visual confirmation of temperature. Now when I flush post steaming I can flush the group/boiler until I see it fall to about 10 degrees or so above my set temperature. This is real nice because I don't over flush and the boiler gracefully falls right back to and maintains the set temp. Pretty cool.

But... For you Jon I suggest you learn your Silvia as is before you make mods. I had mine 3 years prior to the PID installation last week.
David White
EspressoParts.com
Top

Great suggestions. Thanks Dave and Terry!

1) When you are steaming the milk with the top slightly submerged, do you move the pitcher around at all?

I don't really move it around other than introducing air and then submerging and angling for the circulating.


5) Are you saying that I should leave the Rocky 1/4 to 1/2 full? Isn't the Rocky's hopper less than air tight? It would take me days to use all those beans...

Nah... Personal preference. I add enough to the hopper for what I might use that day. Just make sure you got enough for your shots.

I could possibly... My personal camera is here but running low on batteries. Maybe I'll snap a shot or two or even video tomorrow morning with my Silvia.

Yeah it is a little you'll get it. I just stop now and again between tasks to make sure the milk won't separate and that and micro-foam is only real important for latte art which is a whole 'nother ball 'o wax that I am just starting to conquer.

Speaking of Latte Art! Anyone see this yet? http://www.ratemyrosetta.com/index.php
David White
EspressoParts.com
Top

Holy s^*^%. I just made the best espresso yet, plus got a perfectly frothed steamed milk! Thank you for the help!

Special thanks to Dave for spending 45 minutes or so on the phone yakking about the process and stuff.

I didn't get any art going, but I'll work on that. 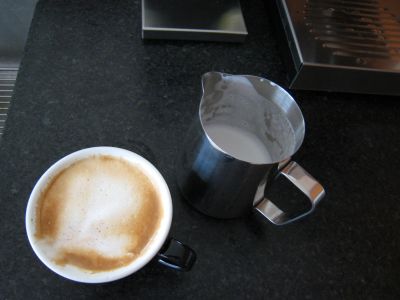 Dave is a pretty good Barista, albeit "Not a Professional one"

45 minutes! geez, he must be trying to compete with Chris Nachtrieb. He barely talks to me that long.......... I think he wants to drive your Segway!

Thanks Jon for posting the video, I took a few notes to compliment the observations others have made. I'll offer my "John Madden" style diagnosis without the crayons.

STEAMING: I cringed at the sound of the milk from 0:28-0:45 seconds and around the 0:51 second mark. It was the sound of big a** bubbles, not fine bubbles of air being introduced to produce microfoam. It appears that you are choking off the steam pressure because it took almost TWO MINUTES to froth a small pitcher. Silvia's one-hole tip could have overflowed two 12 ounce pitchers with foam in that timespan.

More steam pressure and slightly deeper will get the "ripping" sound that means microfoam. It's a very small zone only 1-2mm in depth, but it's easy to hear the difference. You're off by about 2mm with not enough steam. Oh, and hold the pitcher still with your left hand steadying it. Remember we're talking about a teenie tiny zone. You'll never hit it if you're jockeying the pitcher around like in the video.

DISTRIBUTION: You flattened but did not redistribute. I've never seen a grinder except the Versalab M3 that can produce a perfectly even distribution, so you have to redistribute. Dave's Tamp and Dose Digest is your next stop.

TAMP: Be careful how you're tamping. You are "palming" the tamper knob and it's very easy to cant. Instead grasp the tamper like a doorknob: 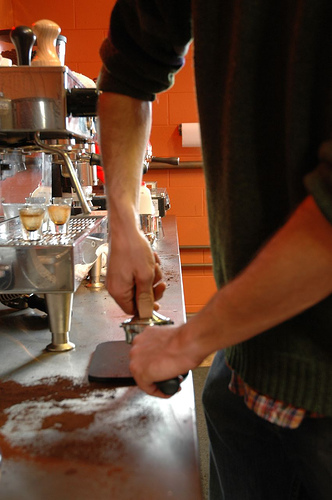 From the HB Tamper Roadshow

BREW FIRST: Or at least flush the group first. I prefer the brew first because it's easier to hit the desired temperature, but both are tradeoffs. Part of the sound you heard was steam blasting through the 3-way valve. You'll hear the same sound if you backflush an HX machine without first purging the superheated water. That can't be good for your machine. The first half of that extraction must have been lots of steam "channeling" through. That may explain the very fast onset of the pour.

Hey, I'm not proud, check out my great looking fern: 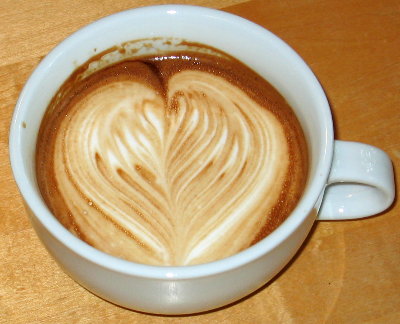 Vote for me! Vote for me!
Dan Kehn
Top
← Back •
By accessing this site, you agree to the site's terms of service. If you need help with the site, please contact us.