Measure dose from whole beans or what ends up tamped?

Do you measure dose from whole beans or what ends up tamped in the PF? I was trying to be more accurate, according to one of Chris' articles on extraction technique - so started weighing. I ground 18 gm of beans, but after dosing / sweeping / tamping, the PF was only 16 gms heavier. I didn't measure tenth of a gm, so maybe it wasn't that far off, but still... should it be closer than that? I think I have to pay more attention to the flat / concave / vex finger sweeping.
Geoff
Top

You need to get one of those pocket scales -- the kind jewelers (and drug dealers!) use that measures to a tenth of a gram. I have found the others to be off plus or minus TWO whole grams!

I got a really good one called "My Weigh" that comes with a calibration weight, if you wish, and works really well. I found that moving to a .1 gram scale made all the difference -- there's really no way to tell what's really happening without it!
I love La Valentina!
Top

I don't think that you really need to use scales. Part of the problem with scales is that all of the nooks and crannies in grinders mean that what goes in is not necessarily equal to what goes out. Another approach would be a darkroom timer. Personally, I'm quite happy with a consistent levelling technique. Dose, strike off level, rap on counter five times to settle, dose, strike off, tamp. I tested it three times in a row and got pour times within two seconds of each other ... not enough to be statistically significant, but an indicator, nonetheless.

I believe what Chris was referring to was consistency in build, as tested and determined by weighing a series of dry pucks all same bean/roast etc., not comparing weight to what was ground to build a puck.
Mike McGinness, Head Bean (Owner/Roast Master)
http://www.CompassCoffeeRoasting.com
Top

Allow me to plug my exercises for tuning your barista techniques. Like Kan would intone to young master Caine, "When you snatch the pebble from my hand, then it will be time for you to leave." 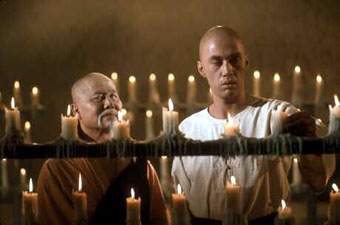 So, when you can dose ten times in a row with no more than 0.3 grams of variance, it is time to put away the scale (for at least two months).
Dan Kehn
Top

So basically, it comes down to the finger sweep; if you do it with a convex finger, you are going to have a little extra in the basket, and concave, a little more.

Then again young Grasshopper - when you can sweep the puck without leaving any trace, then you may pass to the Chamber of the Crotchless Portafilter.
Top

You should do what works for you, but I always sweep the same independent of desired dose. I vary the dose by settling the basket with more or less taps, and tapping at a different dosing level. Most of my baskets are dosed to slightly over half full, two taps, overfilled, then redistribute with Stockfleths move. For those times I want to double-check the weight, I pop the basket and retainer clip from the portafilter and tare to determine the grind's weight.
Dan Kehn
Top

Ozark_61 wrote:So basically, it comes down to the finger sweep; if you do it with a convex finger, you are going to have a little extra in the basket, and concave, a little more.

I recently read about a barista who various his dose in exactly that manner either + or - 0.5 gram, by the position of finger during the sweep. I've not progressed to that point of accuracy.

I use a postage scale that I bought at Staples many years ago. I use it for measuring coffee for roasting purposes, for espresso, my teas, some ingredients in cooking, etc. It's very accurate, or at least accurate enough.

Now, I've measured the weight going in and the weight coming out of my Mazzer Mini. I've never had more than a loss of a fraction of a gram, but that's after sweeping the chute, the doser and creating a mod on the dosing mechanism that helps it sweep the bottom of the doser more efficiently.

I'm confident I could do it without the scale, but it's just such a part of my habit and it only takes me an extra few seconds.

To answer your question though: I measure from whole beans knowing that there will be a tiny bit of loss.
Top
← Back •
By accessing this site, you agree to the site's terms of service. If you need help with the site, please contact us.