Beginner and pro baristas share tips and tricks for making espresso.
← Back to Tips • 137 posts •

Bit of performance anxiety in there, but that's par for the course for my latte 'art.' Sometimes better, sometimes worse. Comments and suggestions welcome as always

EDIT: I hadn't noticed but that's a scarily appropriate line of the song for the video to finish on. It was on the radio too!

Add a pole and some eyes and it looked like the grim reaper to me. Pretty cool.

Hahaha, nice! I'd never even looked for 'other patterns' in there. Better stop serving these to the girlfriend then eh?

HB wrote:Our more accomplished latte artists are welcome to add their own assessment of what went wrong.

Dan, you should have started with your pitcher pouring from higher.

When pouring latte art, you have to take into account the buoyancy of the foam. In order for the white foam to get under the brown espresso, you have to start from higher up (but not so high as to create splash-bubbles). When it's time to draw the white art, bring the pitcher down, touching or close to touching your cup.
Nick
wreckingballcoffee.com
nickcho.com
Top

I am extremely excited about the birth of this thread. I think the videos and tips will help me a great deal. I will add my own video chicken scratch for sure.
Top

HB wrote:Uh huh. Bring it in one take, buddy.

Sheesh..I haven't had anything close to time to get a camera out during my morning routine...this is the first time I've even been back here since I posted that. Excuses, excuses... Ok...if I can remember to do it I'll get a camera in there with me on Saturday morning. It will probably be nothing like Regulator's! Nice one-take, jon!


HB wrote:Windows Movie Maker. It's free, so I use it.

I figured there must be something free floating around since a lot of people seem to use it. I'll have to look into it.

Spresso_Bean wrote:Add a pole and some eyes and it looked like the grim reaper to me. Pretty cool.

remember that elvis is everywhere.
Top

Sponsored by Artpresso Design - quality products for the serious barista

ok heres my go at it...if it can be called that!

let me just say I knew it was doomed from the get go.
from the stale coffee, to the slighlty over temp milk, and the whole lotta air that got in to the milk.
but in the spirit of the thread, I posted it anyways.

oh well its my second real try ever at this (first on camera) after having seriously watched others.

...not trying to make excuses or anything

Not bad. Pulling away earlier would have avoided the "bulb" on the top.


Dogshot wrote:Actually, I know what it's like to try to manage kids while pouring latte art, and my art is certainly no better.

No kidding. I hadn't planned on music for the video, but the chaos in the background was captured in the audio track.


DC wrote:Bit of performance anxiety in there, but that's par for the course for my latte 'art.' Sometimes better, sometimes worse. Comments and suggestions welcome as always

Judging from the fluidity of the pour and the bubbles that rose to the top, I think the foam and milk were not well incorporated. PeterG once suggested letting the milk sit a short spell and then doing the thunk / swirl thing to reincorporate them. In competition, baristas will frequently swirl the pitcher in a small circular motion on the countertop. It keeps the motion repeatable and controlled, especially when you're nervous. I've never tried transferring between pitchers like competitors routinely did last year, but I think the same technique could be applied. Abe commented on this in USBC Barista Competition - Competitor Debriefing:


Abe Carmeli wrote:Tricks I learned from the pros

If I learn only one thing from an espresso jam I consider myself lucky. During the judges certification workshop, we were served drinks by two USBC Champions, Bronwen Serna & Phuong Tran. Both terrific baristas.

Bronwen is famous for her cappuccinos, and here's what makes her shine: Often, a cappa will show crema bubbles. This may not affect the taste so much as it affects the visual. To avoid crema bubbles she drops a little foam to the cup and immediately starts swirling and banging it on the counter as one would do with a steaming pitcher. After she is happy with the result she pours the rest of the milk. 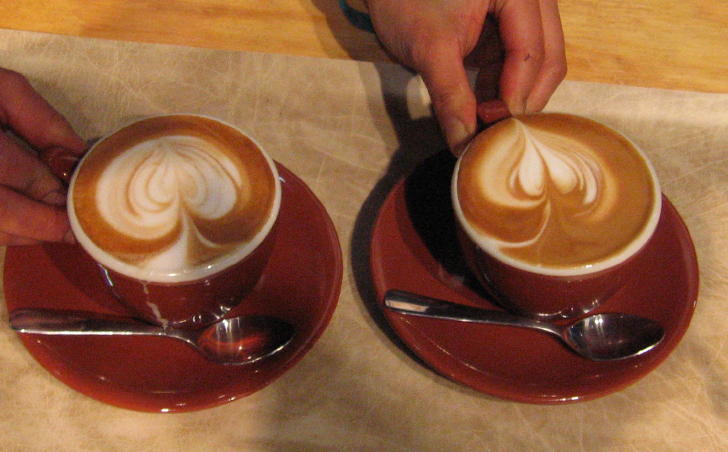 A perfect cappuccino by Bronwen Serna served during the judges certification workshop.

This one comes from Intelligentsia. Ellie, Amber & Matt all used it. The problem with using one pitcher to pour two cappuccinos is that the first pour will have more foam than the second. To avoid it, pour some of the foam into a 2nd pitcher before you pour your first cappa. Then use that foam to top off your 2nd pour.

Nick wrote:Dan, you should have started with your pitcher pouring from higher.

Thanks Nick, your contributions are welcome. For those following this thread, Nick was the winner of the SCAA SE Regional Barista Competition. Abe and I were sensory judges in the final round; I remember that you served a very good cappuccino.


DigMe wrote:Sheesh..I haven't had anything close to time to get a camera out during my morning routine...this is the first time I've even been back here since I posted that. Excuses, excuses...

Remember to save some excuses for the post including your video.


gtrman wrote:...but in the spirit of the thread, I posted it anyways.

Exactly! You said there was too much foam, but it didn't look like it from the pour. Perhaps it's again a matter of incorporating the two?
Dan Kehn
Top

HB wrote:Our more accomplished latte artists are welcome to add their own assessment of what went wrong. Or better yet, post your own video under the same rules: No do overs, no editing, just pour and post.

Dan, you're a brave man! Ok, I'll play: here's a video of this morning's capp. First try, no editing, no do-overs, etc.