OK..in another previous post, I mentioned how a curved tamper was showing an improved consistency in my shots. This issue is going to weird places lately, and I have run into some confusion...surely due to technique, but also due to some basket ignorance. I have since found that I have three different baskets I have been using, none of which I really can confirm the origin of/manufacturer etc. (though, I know one is a LM double). I have two baskets that have a ridge that prevents the tamper from going inserting too far. i.e. when the basket is empty and I place the tamper in the basket, it hits the ridges and the top of the tamper base is about level with the top of the basket lip. These two baskets are not the same though...one is slightly taller than the other. One of these I am sure is the basket that came with my rubber handled 15 degree LM portafilter.

I have another basket (which I have just realized seems to work much better than the other two in terms of consistency), which when empty and I insert the tamper, allows the tamper to insert much further before meeting resistance from the sides of the basket. The top of the tamper base when inserted into the empty tamper is about .75cm below the lip of the basket.

Anyways...to get rid of the basket variables and "standardize", I ordered two LM double baskets (MZ_107 LA MARZOCCO DOUBLE PORTAFILTER BASKET) from EPNW, and now have two baskets to work with that are identical. These two new baskets "feel" the same as the first two I mentioned, which only allow the tamper to insert as far as the ridges. This leads into my issue.

So...after a week or two of playing, I have found I am back to my inconsistency of the past IF I use the ridged LM double baskets. Can anyone suggest with the LM double baskets, after a tamp, where in the basket the level of grinds should be? Should the tamp bring the puck down into the slightly smaller diameter area just below the ridge? Should the puck (after the tamp), be packed and end up higher than the basket ridge? (i.e. should it hide the ridge).

Any suggestions would be appreciated...I will post some photo's ASAP....

the actual dose is up to you, but you need to be consistent in that dose, and such dose needs to allow the tamper to work properly. if your tamper is striking against the basket as you tamp (in essence, tamping the basket instead of the coffee) then you have an incorrect dose for your setup or an incorrect tamper for your dose. personally, on a LM double basket, i like to have the coffee just obscuring the spring retention groove after tamping.
Top

As with many things espresso, the LM double basket is less forgiving but when handled correctly (IMHO) results in better tasting espresso.

There are a million "work arounds" that people employ (ranging from using an under-sized tamper to doing complicated multi-level dose and tamp regimes to just not using the basket). If you want to get the best out of this particular basket, however, the best way to go is to get consistent with your dose. You have a more narrow window than you get from other baskets. So practice consistent dosing by breaking dosing down into its component pieces and executing each piece in exactly the same way and in exactly the same order each and every time.
"Taste is the only morality." -- John Ruskin
Top

I agree with Malachi about correct dosing but... I'll go a bit further and suggest that your tamper is incorrectly sized for your filter basket (or vice-versa). Ridgewise, some baskets are outies and others are innies (see related discussion here on CG). If you have an innie, the tamper should should not catch on the ridge, or it limits your ability to downdose. No such problems arise on outies.

On a tangentially related note: I have a LM ridged double, but the holes on the bottom of the basket are not centered - they are skewed toward one side by 1-2mm. I can't seem to get a centered basket from anywhere. Would this result in uneven extractions?
Top

Ok, let me give you my two cents worth. I think the best solution for you is to consider buying the LM ridgeless double basket from EPNW. I have been using this basket with my Giotto P now for about a year. It was a large learning curve for me coming off my stock double basket, but I am now making some beautiful shots with it. Because there is no ridge on the basket, the tamper does not get hooked up on the spring mount.

P.S. I just registered on this site. I am a huge CoffeeGeek fan and I am very excited I found this place.
Top

A LM ridged double basket and a 58mm Reg tamper do not get along very well. EPWNW lists them as a 57mm basket. If you want to use a standard 58mm tamp, you need to use the ridgeless LM baskets.
Dave Stephens
Top

ECM wrote:I think the best solution for you is to consider buying the LM ridgeless double basket from EPNW. I have been using this basket with my Giotto P now for about a year. It was a large learning curve for me coming off my stock double basket, but I am now making some beautiful shots with it.

I'm surprised you preferred the stock Giotto Premium basket. Isn't it a 14 gram basket? Looking around my collection of photos from past reviews, I found this:

I never gave the Giotto's stock basket a serious look because I didn't want to complicate an already involved three-way espresso machine evaluation. Rummaging through my drawer, I count three other types of doubles: Faema style (above), LM with cinched waist, and what appears to be the LM ridgeless: 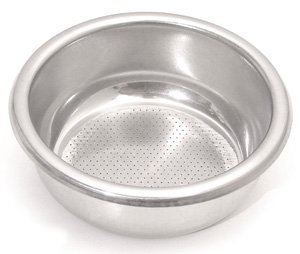 Lately I've been alternating between the Faema style for ristrettos and the LM ridged baskets for full doubles. Not sure the ridgeless will behave the same as the ridged given it's narrower and the bottom edges are rounded instead of squared off. That's fine, I like to mix stuff up...


cannonfodder wrote:If you want to use a standard 58mm tamp, you need to use the ridgeless LM baskets.

I use the LM cinch-waist and dose to above the the retainer clip (around 17-18 grams) and never had a problem. It's true that you'd definitely clang metal if you want a true 14 gram dose. Is that what you're doing?
Dan Kehn
Top

The Giotto basket looks like the Faema "12 gram" I have; I only using it when I'm running out of coffee

malachi wrote:As with many things espresso, the LM double basket is less forgiving but when handled correctly (IMHO) results in better tasting espresso.

Can you say what it is better than? Do you really mean this basket produces better tasting espresso than some other ridgeless double basket?

GRB
Top
← Back •
By accessing this site, you agree to the site's terms of service. If you need help with the site, please contact us.