swevictor wrote: it's reasonably doable to dose 15g in the VST basket as well though.

You have better technique than I do then; anytime I go below 17 on mine, bad things happen.
Jim Schulman
Top

Aanyway - I got a strong feeling of "challenge accepted" after reading the reminder that IMS is meant for 12-18g dose... So: 12g morning coffee it is!

Thoughts: Distribution tool I use can't reach the coffee anymore. Lots of channeling presumably making fineness of coffee not the thing that controls flow. Surprisingly drinkable shot despite this. Let's try IMS with the same settings.

Thoughts: As usual extraction looks a bit better than VST, presumably quite a lot of channeling still even though 15s is the "best" I managed with 12g in this test. Quite weak/watery taste


Result: 12g is not a winner in either basket, at least not with my prep. Surprisingly the VST shot tasted more (and better) despite faster/worse extraction. Presumably, the coffee itself was quite "forgiving" (dark roast, not much acidity to be found, ...).

The VST shot was in the end transformed into a Cappuccino. Very milky and mellow since I forgot to pour less milk than normally, but certainly no offensive flavors

The pull
VST extraction started slightly earlier around the edge, but wet through entire basket before first drop left the filter.

IMS extraction started slightly earlier along one edge, but wet through the entire basket before the first drop left the filter.

Taste
Slight advantage for VST which packed a bit more punch/body. Both shots were a bit too acidic for my taste, but not overly so. I typically pre-infuse this coffee to lessen the acidity, but wanted to keep the process here as similar as possible.


My take on this is going to be divided into 3 parts.
First, my take as to why the edge is shown to flow faster than the center even with WBC grade baskets,
Second, A partial hypothesis as to why preinfusion lessens the acidity (although it does a lot more than that), and
Third, basket shape affects the path of flow (proven). What is it's relation to taste and why we still have much room for improvement in basket design. (also a coincidental suboptimal solution used in WBC, explained with link here :https://baristahustle.com/blog/nutation-an-apology/)


1. Okay! I think the reason as to why the edge flows faster is actually a byproduct of tamping downwards but not creating a gradual seal by friction due to the force of the tamper being directed downwards, but not sideways from the center of the top of the circle. Water however, follows the path of least resistance. Water is also unable to be compressed and so pressure applied to a completely sealed tank is evenly distributed meaning resistance = equal. Therefore, I am led to believe that the edges of all baskets flow faster than the center due to the said observation. This leads to very uneven extraction even though the entire bottom of the basket is wet before the first drops fall.

2. Short one. Preinfusion uses less pressure and as we've seen in experiments, the coffee grounds do not noticeably expand until the pressure is released. The inverse is that the grounds are ever so slightly compressed when the pressure goes up. You want this force direction downwards and outwards (indicates a good seal and a more complete extraction), not upward and inward (caused by basket resistance and lack of seal at the sides). It lessens the perceived acidity because the harder to extract larger compounds that give it body is also extracted.

3. Read the linked article? Yep. My question was why does it slow down the grinds? It's not caused by compacting the coffee further downwards, but sideways instead which strengthens the seal between the grounds and the metal wall! In fact, Nutating will cause the grounds at the center of the puck to draw outward! Problem: Nutating is super unreliable and not a constant, unlike basket design. Solution: Provide a basket with higher sidewall resistance perhaps through micro-texturing where the sides provide higher resistance than the coffee grounds! The water should now flow through the interlocked coffee a lot more reliably than by simple nutation leading to much more consistently better extractions!

What are your thoughts? Let me know!!!

note: Nutating is a viable strategy for the time being in my opinion due to in universally increasing the extraction of coffee, just be careful not to strain your wrist!
Magician of the Great Coffee Bean Pressure-Extraction Machine.
Top

Subrutum wrote:My take on this is going to be divided into 3 parts.
First, my take as to why the edge is shown to flow faster than the center even with WBC grade baskets,
Second, A partial hypothesis as to why preinfusion lessens the acidity (although it does a lot more than that), and
Third, basket shape affects the path of flow (proven).
...

Very interesting writeup! Some quick thoughts from my side:

1. Faster edge flow, doughnut extraction etc: Sounds plausible. To me though, this only really happens (visibly) when underdosing, not for an 18g dose. After a good extraction this morning I actually dissected the puck; to the naked eye it looked very uniform and uniformly wet although that doesn't say much. I've read the linked article before, but to me it seems like they see nutation as better overall compression, not specifically around the edges? Either way you might be on to something. Larger dose => Higher puck, which could possibly lead to better edge compression (sideways force when tamping). Lower dose => Lower puck: Reasonably very little side force from the ground no matter how you see it.

2. Probably right regarding extraction. Preexpansion during preinfusion => better seal I think is a reasonable added bonus I think.

Also: Shouldn't doughnut extractions be very much less common with IMS baskets (smaller perforated diameter - larger solid edge) than VST baskets?! I haven't found that to be the case anecdotally. For smaller doses, water might however just gush around the puck no matter the basket type, who knows!


P.S. Regarding nutation, espresso making is unreliable/hard enough as it is without adding more arbitrary "mano" steps! D.S.

There is one tiny issue with this test.

For some reason IMS ridgeless and ridged baskets have very very different geometry. I would have used the ridgeless basket and as you can see from the photo it looks a lot like the vst basket and is not rounded like the one you used.

It would be interesting to do the test with both being ridgeless. I have used both and flavour profiles kept on changing on both so we didn't come to any conclusions (attributed to grind and other variables running the shot). 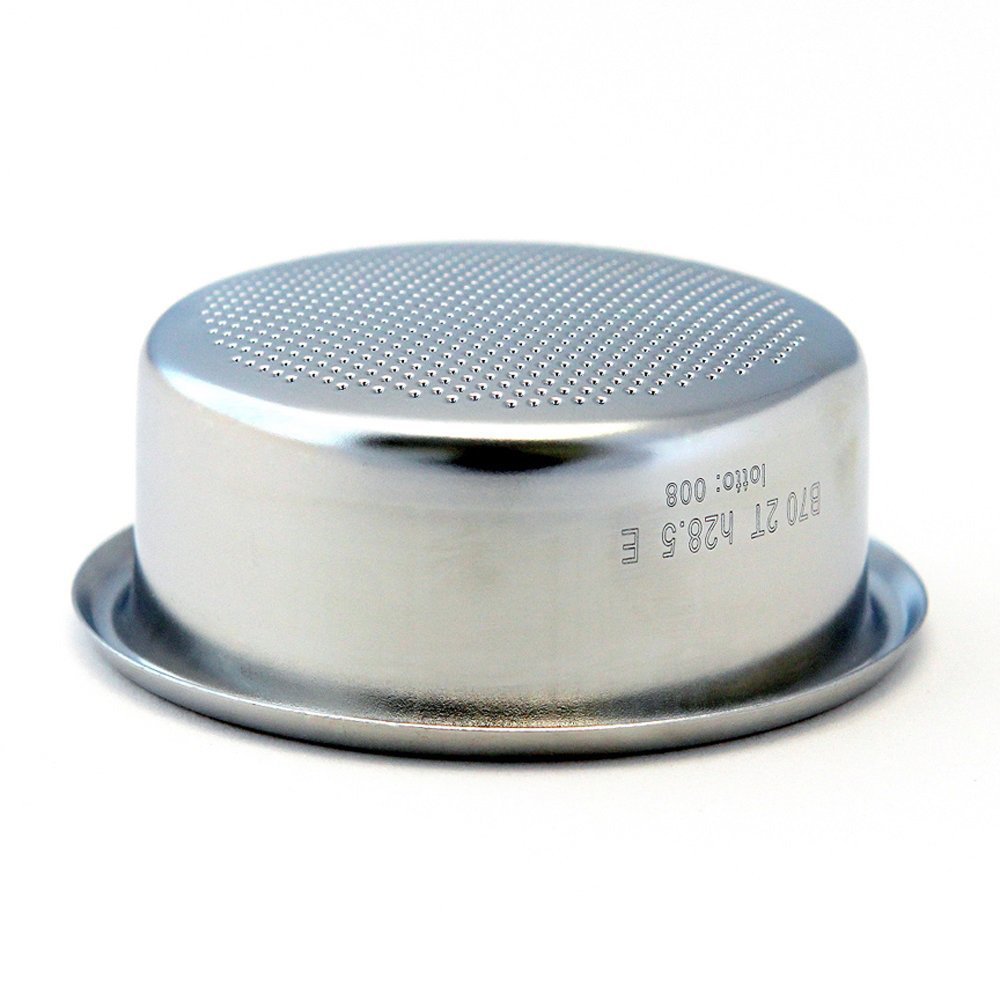 Good Coffee: Technique/Knowledge > Grinder > Beans > Water > Machine
Top
← Back •
By accessing this site, you agree to the site's terms of service. If you need help with the site, please contact us.