So I bought my Oscar back in late February or March and I've been pulling on average of 2 or 3 shots a day. I finally decided to backflush with detergent and remove the screen for a good cleaning. Yikes! The backflush was one thing with it's brown foam draining into the drip tray but the backside of the shower screen was downright gross. Fowl smelling, black goo on the underside of the screen and the 1/2 inch thick brass disc thing behind it. I gave all parts a good cleaning and put them back together before running a bunch more water through the system. I pulled a shot a discarded it then pulled another. The results through my bottomless PF were much smoother. The shot also pulled a fair bit quicker so that allows me to grind a little finer now too. The first shot I tasted since the clean was very good. It seemed less harsh, allowing me to taste more of the flavor of the beans. I'm kicking myself for not doing this sooner. I'll be doing this regularly from now on!!

Backflushing without detergent is helpful, too. I backflush at the end of each session, and you could eat off my dispersion screen. If I look under the group and see any residue, I go to the detergent, but regular maintenance keeps the goo away to start with.
Espresso Sniper
One Shot, One Kill

It still amazes me that there are manufacturers/resellers (and some "professionals" in the field) who state that some machines with standard 3-way valves should not be backflushed. Once you see the amount of filth that can build up in there, it makes one wonder. If anyone reading this has not removed their shower screen nor backflushed for more than a month or two, allow the machine to cool, pull the screen and smell the brewhead.
Espresso! My Espresso! - http://www.EspressoMyEspresso.com
LMWDP #644
Top

I do a weekly detergent flush and water flush every couple of days. You will be surprised how much better your shots will be once all that old crud is cleaned out.
Dave Stephens
Top

Pull a shot through an empty portafilter into a cup.
Taste it.
Should give you an idea of just how clean (or unclean) your machine is.

FWIW, I backflush every day. About 3/4 of those are with detergent. I clean the portafilter every day.
It's not a pain in the ass and it doesn't seem to be "bad" for the machine and my shots taste good.
"Taste is the only morality." -- John Ruskin
Top

I tend to do a detergent backflush every week and a clean water backflush before and after every shot. When I backflush with detergent, I do one flush, then leave the blind filter locked in the head for about five minutes (with the pump OFF), so that the detergent can really do its job and get all the grease out.

It's pretty hard to backflush too often, but sometimes with my e61 levetta group, the lever will start to squeak if I backflush too often and break down the grease inside the head. Once a week seems about right for me. Like Chris, I wipe the baskets and the pf out every now and then.

One of the nice features or lack of features of using a lever machine (Elektra Micro Casa a Leva and Ponte Vecchio Lusso) are the no pressure relief system. Easy & quick removal for cleaning of the the dispersion screen and exposed area of the piston. Even without the relief valve and with flushing/portafilter wiggle cleaning of the group you still need to on a regular basis pop off the dispersion screen and give it a good cleaning. Just not as frequently as on the old E61/HX machine.
LMWDP #151
Top

narc wrote:Even without the relief valve and with flushing/portafilter wiggle cleaning of the group you still need to on a regular basis pop off the dispersion screen and give it a good cleaning. Just not as frequently as on the old E61/HX machine.

I'm all for cleaning the hidden side of the dispersion screen, but this "before" chemical backflush photo puts it in perspective: 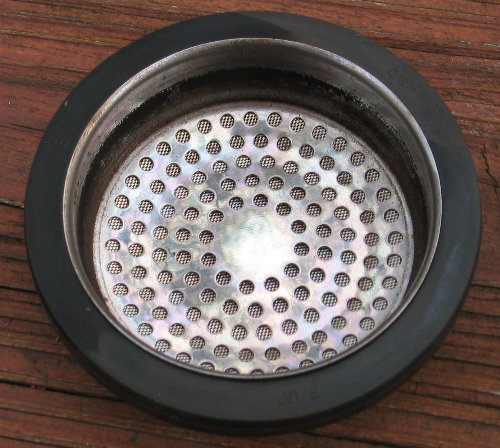 E61 dispersion screen after approximately three weeks of use

And a typical "after" chemical backflush photo: 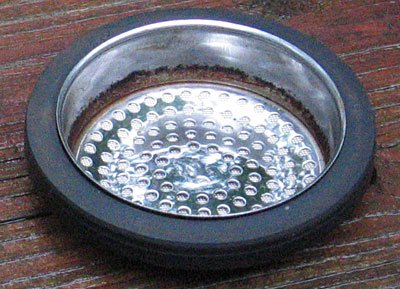 The thin smudge of grime above wiped off easily with a towel.

On the other extreme, I once helped a friend clean his E61 espresso machine. He didn't know what a blind basket was and had never heard of espresso cleaners like Cafiza. Behind the dispersion screen lurked a thick, sticky layer of tar. It took me a good 30 minutes of scrubbing and backflushing before declaring it clean. 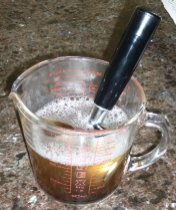 [When you live in a desert, every drop has double duty.]
Ian's Coffee Stuff
http://www.ieLogical.com/coffee
Top

n
Top
← Back •
By accessing this site, you agree to the site's terms of service. If you need help with the site, please contact us.