How do you pull a single espresso? - Page 2

The lowest I've gone is 4 grams but it wasn't that great. I did it with the normal tamper (~57mm) but with a Rancilio basket. It was so small that it just filled the middle of the basket. The only problem I see with single baskets is the head clearance. I guess all machines don't have the same.

Do Italians use special tampers for singles? Do they sell such tampers anywhere?

Well, Jim noted above that the "widget-tampers" that are on most grinders will tamp a single basket, sans the LM basket.

Especially with my standard E-61 baskets, as there is almost no wall for the mini-inner basket. Its more of a steady slope to the bottom. Considering how the LM basket is designed.. I wonder why baskets like the E-61 single exist.. It kinda completely defeats any attempt at a good distribution.
www.bigbangcoffeeroasters.com
Top

With the LM basket I do from ~8 till ~11.5 grams. You can do less than 8 but then the tamper touches the metal basket. For lower than 8 grams I use other flatter basket or maybe could use a smaller tamper as suggested. I get a nice choke with single baskets. The single baskets choke more than the doubles (less holes). The tamper in my Macap CPS is smaller than 58mm.

here is how I do it; no scales, no distribution or levelling. being careful with basket ridges and grind fine, tamp light 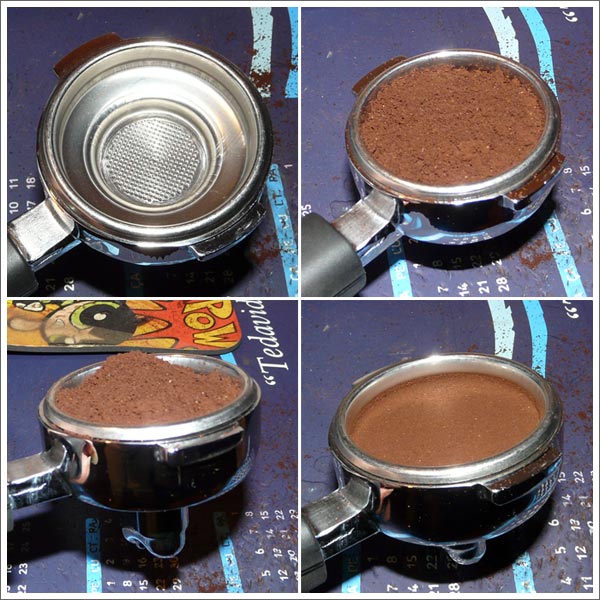 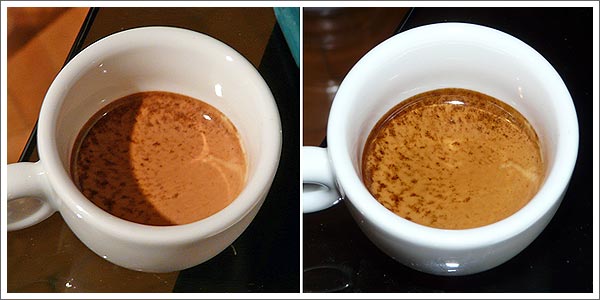 JmanEspresso wrote:I wonder why baskets like the E-61 single exist.. It kinda completely defeats any attempt at a good distribution.

There is no mystery. In Italy, the dosers, tampers on the dosers, single baskets, and machines work together to churn out standardized singles. LM, with their "peculiar" gear, is virtually non-existent in the Italian market (at least I've never seen an LM machine in any Italian bar). In the rest of the world, we don't want to fill dosers hours ahead of time, serve 95% single shots, and use coffee cheap enough so a shot can be sold for 80 cents. So obviously we discover all sorts of design flaws in the equipment.

My feeling is that terrific to reinvent espresso in any way we please. But I think we sometimes shoot ourselves in the foot by not learning how to do standard Italian shots in order to understand why the gear is designed the way it is.
Jim Schulman
Top

then here is a question, "what's the roast date of that preground coffee in italian dosers?"

what we complain about cafes in general that they fill dosers hours ahead of time. that's also a common action here in turkiye. whenever I get a chance I ask why? regular answer I get "because that's how they showed us during our education". as you can guess "they" represent either an italian instructor or a turkish instructor who got educated by an italian instructor or an italian company. yes dosers are full in italy, we know that part. though there is a detail almost none of us pay attention. we don't have any info about the roast date.

here in istanbul there's a company very famous with their turkish coffee and 99,9% of their sales preground. to be able to buy 50-100gr preground coffee people get in queue before their door. sure there are many other reasons for that, but what I don't understand is the coffee will go stale within minutes right? right. so the last time I was there I asked about the roast date. the guy treated me as if I'm insulting him and the company. showing the huge "working" roaster behind, he said "what do you mean? we roast daily and grind instantly"

huh??? what about "beans resting time? releasing some excess gas out of their chest?" of course I couldn't ask that much cos he had turned his attention to next customer

so, what if cafes in italy get ultra fresh coffee, preground, let it rest in dosers a few hours, letting coffee age "faster" and get ready for the next customer? you know there's rarely a queue for espresso at cafes where we all live, but they have in italy and on daily basis. any italian with an answer?

The premium brands in Italy, Illy, Jolly, and a few others, use nitrogen pressurized canisters that can be upended and used as Mazzer hoppers. Presumably, grinding ahead has some justification for these ultra-fresh coffees. The standard bar blends are delivered in 5 kilo valve bags. Presumably, staleness is not a factor for these 30 percent plus bar blends.

It would be interesting to see if one could take one of the US blends for which roasters recommend 7 to 10 days rest, and see if they taste the same if pulled from filled dosers on, say, day 3 or 4.

A lot of this is also coffee dependent -- for an Ethiopian fruit bomb, for instance, fresh is king: the green beans go flat after about 4 months, the roasts after about 4 days, and the fresh ground in about 2 minutes.
Jim Schulman
Top

kahvedelisi wrote: huh??? what about "beans resting time? releasing some excess gas out of their chest?" of course I couldn't ask that much cos he had turned his attention to next customer

Pre ground does away with the out-gassing. That is a trick you can use on to fresh coffee. Grind it and let it sit for 3 minutes (or there about). The coffee will out-gas very fast. I believe it is a surface to mass issue. Ground coffee has a much higher surface to mass ratio than whole bean so it oxidises faster. Grinding fresh from the roaster coffee and letting it sit and rest before you brew will speed the out-gassing although it does little for flavour development. It is simply out-gassed, not matured, but can help get rid of the baking soda taste if you cannot wait a couple of days for the coffee to rest.
Dave Stephens
Top

The amount I use ranges from 7 to 8 grams, depending on the bean. I use an LM single and the small end of a Vivace Ergo Packer. I grind, fill the "inner basket" half way and tamp lightly (maybe one pound of pressure) and then fill the rest of the way. To get the rest of the grinds into the inner basket I run my finger around the edge of the basket making a mound in the center, then I tamp again lightly.

The puck is soupy when it comes out, but I rarely eat the puck.

Once I get my lathe setup I plan to make a small tamper for the LM single. If I remember correctly it is about 40mm.
Dan
LMWDP #242
Top

So, I did some experimenting today with the single basket and a triple basket, using Ethiopian Organic Birbissa, and Yemini Mokha Harisi.

Single Basket-Birbissa
-3 filling the "whole" basket, and using the 58mm US curve tamper, at 15lbs(bathroom scale), dosed at 11 grs.

Both types of shots beaded evenly, and flowed evenly as well. The main difference in the shots, was the amount of flavor and clarity from the second 3. Lots of melon and berry flavors, with some very milky chocolate on the end. The larger doses were still fruity and chocolaty, but the fruit was darker, like blackberry and fig-ish, and the chocolate was also darker, slightly bittersweet.

Seems for this basket/coffee combo, filling only the mini-basket really made a better shot. Sweeter, richer, much more clarity. I think the finer grind and pseudo-tamp made an impact as well.. I notice, even in double shots, fruitier stuff does taste "clean and clear" when using a very fine grind, and almost no tamp, just a slightly firm level.

So, with this, I have changed how I pull singles. Closer to a traditional dose, only filling the Lm "mini" basket.

-The "two types" of single shot yemens did not show any noticeable clarity of muddling of flavors. The flavors of all of them were rather boring. Earthy, with an overwhelming amount of spice, no dark fruit or chocolate that I could detect. I did not enjoy them very much at all.

-The Triple shots of the birbissa, while different, were equally un-enjoyable. Sharp fruit flavors, and rather acidic. It was not your typical, thick syrupy triple ristretto.. They were on the thin side, and just plain unenjoyable. I expected this though, A fruity ethiopian is not my 1st choice for a SO triple ristretto.

My conclusion on the single shots, is that a fruity, brighter SO can make a surprisingly good shot, and the single is where that is, if at all. On the other hand, a dark, winey, spicy SO makes a rather boring, flat single. ON the flip-side, its exactly the opposite. The dark, "heavy" SO does well as a "heavy" triple ristretto, and the bright, fruity "light" SO, does well as a "light" single ristretto.

Now that I type that, it makes sense. What better coffee(s) to use for a single shot, or a "light" shot, then a Fruity, Bright coffee? In the past, I have reserved the single basket for coffee someone had specifically told me was good as a single, or, the end of a bag, when all that is left is <10gr anyway. However, after todays tests, I feel i have a better grasp over the single.. How to use the "best" single basket and which coffee(s) to use, to get the best possible shot from it.

Ill need to consider buying a tamper made to fit a Lm "mini" basket. I imagine the single basket is going to see more use.. well.. relativly more use. Ill be hard pressed to find something to get me off of triple ristretto blend of Yemen/Brazil/Salv/Sumatra habit.

As an aside, if anyone has any Ethiopian Birbissa, I highly suggest it in the Vacpot... Really good stuff.
www.bigbangcoffeeroasters.com
Top
← Back •
By accessing this site, you agree to the site's terms of service. If you need help with the site, please contact us.