Home barista techniques that the pros shun (and vice versa)

From the thread Uneven Extraction:


malachi wrote:On a related note... it seems like a lot of the things people do in coffee that seem odd are attempts to work around barista weaknesses rather than work on them.

Chris' indictment above, the tips Abe offered on technique in the Brewtus review, the tips I offered on temperature control for the Elektra A3, and the recent SCAA barista competition prompted me to re-evaluate my chosen barista technique, asking myself: Comments?
Dan Kehn
Top

I'll dive into the latter point...

There are a fair number of common practices in a coffee bar that are impractical or un-needed in the home. Examples:

- daily detergent backflushing
- scouring inside of portafilter and dispersion block every 45 minutes to an hour
- various things having to do with burning through beans (garbage and seasoning shots, purging the grinder, filling the hopper fully, etc.)
- with non-plumbed in machines a lot of the flushing and rinsing stuff is a problem due to the drip tray
- various "sloppy" techniques that make a mess are often a problem at home (grin)
- micro adjustments to the grind on a per shot basis (unless you're building a ton of drinks for some reason)

I'm interested to see what people think are examples of techniques that pros shun.
I'm sure that many of these are going to be totally practical at home and in many cases should illustrate inherited prejudices I might have.
"Taste is the only morality." -- John Ruskin
Top

I use two techniques that pros shun, and that I myself wouldn't use if I were to pull shots in a cafe.

1. I leave the hopper off my grinder and spoon beans down its throat, blocking the throat with a tamper. This is because I usually have three or four different coffees, and it does give very precise dosing. The down side is that the beans hop, similar to a hopper running low, and the grinding takes a little longer.

2. I remove the springclips from my PF and dose into baskets alone. This has huge advantages at parties with a single group machine, where I can make up the basket for the next shot while pulling this one. There's a decent sized advantage in levelling speed, since you can rotate the basket, either while filling it as Abe does, or while tamping, as I do. There's a very minor advantage in thermal stability, which I doubt exists anymore with nekkids. Finally, there's another minor advantage of not bowing the bottom of the basket from repeated tamps; since its on the counter, it stays flat. The big disadvantage is that it absolutely requires that the machine be next to the sink, so you can dump the used baskets into it. Knocking out a basket without a springclip is hit or miss.

I'm not sure if the changed cleaning routines represent a departure from professional technique. Rather, the cleaning is kept commensurate with machine use. In a cafe, the machine gets as much use in a day as a homer does in two to three months.
Top

I'm way slower than a Pro, I have a Zen moment when I dose, disperse and tamp. The time would be prohibitive in a cafe setting.

I actually think that many of the techniques used at home tend to be built around the option of taking your time.
"Taste is the only morality." -- John Ruskin
Top

another_jim wrote:The big disadvantage is that it absolutely requires that the machine be next to the sink, so you can dump the used baskets into it. Knocking out a basket without a springclip is hit or miss.

I must be a little more trained in hitting it. Those many days I spent on the basketball court instead of in the classroom have finally paid off. I have my knockbox right next to the machine and it is as clean around it as my mother's kitchen floor.

Also I don't have anyone looking over my shoulder as I am the only "Barista" in my home. Everyone thinks I'm a little eccentric and they stay out of my way.

malachi wrote:I actually think that many of the techniques used at home tend to be built around the option of taking your time.

Built around the option of taking my time?!?

If anything my techniques are built around maximizing the quality of the first shots. There's the cost of the coffee, which professionals largely ignore, and my time limitations during the week. I only have time for three tries and it's out the door, good or bad. PeterG mentioned that he's never paid for coffee, ever. Maybe he was already working on psyching us out for the Pro-Am competition, but he said that Mike and I dial in grinders much faster than him. It's not about skill per se, it's practical necessity. Mike will roast six ounces of coffee for a sampling -- Peter claims he would use more than that just to dial in the grinder. I laughed because we've worked out our own shorthand for dialing in by having a reference (e.g., "For a ristretto, turn to 1-1/2 clicks coarser than Toscano at three days post-roast").

Back to the original question, one common enthusiast practice that I followed for a long time was measuring the weight of the beans / grinds. Part of the motivation was saving coffee by grinding precisely what was needed, the other was added consistency. It's been awhile since I bothered and tonight I gave myself a quick test. Target weight was 18.5 grams. Results of five baskets measured by volume, two taps at 3/4 full, rounded leveling (Stockfleths move): 17.8, 18.6, 18.9, 19.1, 18.7. Not too bad... but I would be happier to see less variance.

While not a barista technique, here's a couple tools that probably don't see much use among professionals. I thought they were pretty sweet for awhile, but I rarely use the espro and the Macap auto-tamper hasn't seen any action since I finished the grinder writeup. 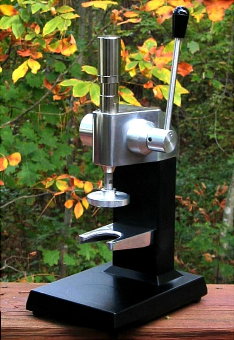 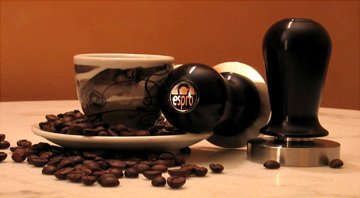 Mid-grind, I like to stir up the grounds in the basket. I use the end of a scoop or brush, and just kinda slice it a few times back and forth. Then I tap the basket on the counter a few times to settle. It seems to help distribute the grounds more evenly. (I feel the need to do this because of grinder mods, but it seems to work)

HB wrote:There's the cost of the coffee, which professionals largely ignore, and my time limitations during the week. I only have time for three tries and it's out the door, good or bad. PeterG mentioned that he's never paid for coffee, ever.

That's a great point.
I did the math the other day and discovered that I average about 4 doubles from a 1/2 pound of coffee.

Are you tapping on the countertop?
If so - the trick to updosing and being consistent (IMHO) is to tap on the grinder fork. This limits your range of motion (the portafilter will run into the bottom of the grinder at the top of your "stroke") and decreases variance. Same number of taps, same range of motion. With this I can be consistent to 0.5-0.3grams (on a good day) over 10 shots.
Also - In my experience, the first shot is almost always the least consistent.

Pros tend to hate these tools for a number of reasons.
Efficiency is one, but I think it's largely a "feedback" issue.

A lot of pros use this or the Clicker - but only for training purposes.
"Taste is the only morality." -- John Ruskin
Top
← Back •
By accessing this site, you agree to the site's terms of service. If you need help with the site, please contact us.