Hi - I actually posted already on Coffeegeek (link) but thought I would try here as well. I am a little frustrated since i bought a new Gaggia Twin and I am probably using it wrong. The shots go blonde after just 6 seconds or so and a full shot is produced in that time. I tamped at 30lbs of pressure with the right amount of beans but it just goes too fast. Any ideas on what I am doing wrong? I am totally new at this.

What coffee are you using? Barry's right, the simple answer is "grind finer," but alarm bells went off when I read your equipment profile:

The Krups "burr" grinder I once used wasn't really a burr grinder. It's a bean crusher similar to the one shown in Jim's writeup Home Barista's Guide to Espresso, Introduction to Espresso Grinders: 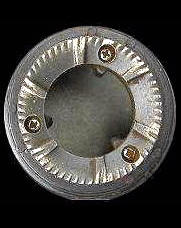 I found it produced a grossly inconsistent grind of dust and boulders (specifically this model).

PS: As a newbie, check out the Recommend Reading in the FAQs and Favorites Digest. It's a bit of a homework assignment, but will answer many, many questions.
Dan Kehn
Top

Yeah I would check the grinder's output for inconsistency but also the freshness of the coffee you're using. If it was roasted within a day up to a week before you bought it and you're still not getting a good shot then it's likely the grinder or your technique. Six seconds is just way too fast to extract the good stuff from the coffee, but if the beans aren't fresh then it's hard to get anything good from that even if your technique is perfect.
Top

You need to do a lot more reading and research. In regards to equipment, the grinder is the most important component. Yours is not up to the task of making espresso. You can try to find a hand grinder, and if you get a good one you might get away for under $100. In terms of electric grinders, you will need to spend at least $225 (+/-), and $300 and up is a better place to start. After that we can discuss what coffee you a using and how old it is.
www.EspressoMyEspresso.com
*20th Anniversary 2000-2020*
Top

OK. I'll try a new grinder. I had no idea it was that important. Given the expense of the machine, I may have to return it for a cheaper one to pay for such a pricey grinder. Any suggestions on machine/grinder combo in the $600 area? Also, the beans were just starbucks french roast and they've been refrigerated for a week at least.
Jay K
Top

While I haven't used it, the lowest cost acceptable espresso grinder (besides a used grinder or hand grinder) is probably the Baratza Virtuoso and then the Cunill Tranquillo. See Best Inexpensive Grinder? for some discussion and other suggestions. The Baratza can be purchased a bit cheaper refurbished direct from the manufacturer (http://www.baratza.com), and I have read of some improvements and stepless modifications on CoffeeCrew (link).
Jeff Sawdy
Top

jaykramer wrote:Also, the beans were just starbucks french roast and they've been refrigerated for a week at least.

Sorry, it's game over. The blond gusher you describe is fully explained.

It's not impossible to pull good shots with very dark roasted coffees, but it requires a finer grind and consistency than your grinder can deliver. A good grinder and coffee with known roast date measured in days are a must. The Coffees forum has recommendations and its FAQs and Favorites links recommendations, including "forgiving" blends that are easier to dial in/temperature tolerant.
Dan Kehn
Top

thanks for all the great advice. it is clear i need a new grinder and some better coffee. i have a feeling i'm going to get kicked out of here for asking this but. in the interest of saving money/time, does it make sense to use espresso pods instead of grinding myself?
Jay K
Top

I don't think anyone's going to get mad at you for asking questions about pods, but my own opinion is that you'd be better off ordering fresh coffee from a well-known roaster and have them grind it for you. That's compared to pods, because most brands of pods are usually only good for ease of use. Either way you won't have the control of a good grinder and the ability to grind just before brewing, but compared to using pods I think that would give you better results.
Top
← Back •
By accessing this site, you agree to the site's terms of service. If you need help with the site, please contact us.