This is a JOINT POST of Jim Schulman AND Ken Fox:

On the "Features" section of this website is an article by Ken Fox describing an experiment comparing previously frozen coffee to fresh, never frozen coffee. It concluded that freezing was a reasonable way to preserve coffee intended for espresso use, for a period of at least two months.

There are, however, several potential criticisms: (1) at least some of the tasters were unknown to the online coffee community; (2) doses used for the shots were possibly too large, in the range of 18-20g for a double shot; (3) better espresso grinders might allow more subtle shot differences to appear; and (4), there was no cupping component.

Jim Schulman, although not present for the original experiment, was heavily involved in its design and analysis. He just completed a visit with Ken, in Idaho, and during this time Ken and Jim were able to do a follow up study that addresses these concerns.

This time around, the test coffee used was Sidamo Worka, a delicately fruity and floral coffee that was felt more likely to show any subtle damage inflicted by freezing. The roast profile used was shorter and lighter, completed in 15 minutes to a roast level terminated before the onset of 2nd crack. The frozen test coffees were frozen for a period of 3 3/4 and 1 month . The grinders used were two original Cimbali Max's, of mixed conical/planar design. The tasters were Jim Schulman and Ken Fox, both tasting half the paired shots and with the ability to separate out the results from these two tasters.

One day we compared the coffee frozen for almost 4 months with fresh, and the next day we compared the coffee frozen for only 1 month with fresh. The format was the same both days. First,
we cupped the coffees in a dual triangle test (1 cup fresh/never frozen, placed with two previously frozen and vice versa), and then immediately following we compared identically prepared shots from fresh coffee with those made from previously frozen coffee. All comparisons were single blinded, in that the taster did not know which of the two presented samples was which. 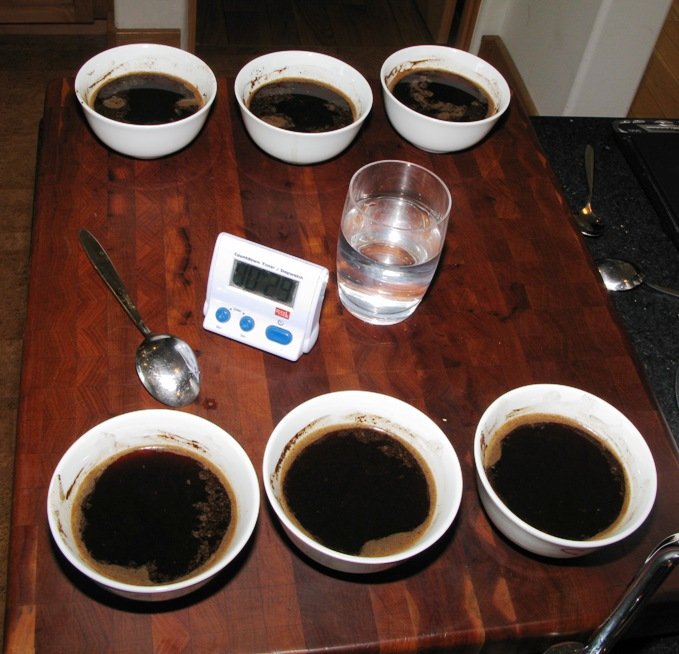 The test coffees that were frozen were packaged immediately after roasting into plastic valve bags (with the valve taped over), then placed into a very cold chest freezer at around -15F, where they reposed until defrosted in these bags couple of days before the comparison tests were conducted. The fresh-never frozen coffee had degassed for 4-5 days before it was used in the test. 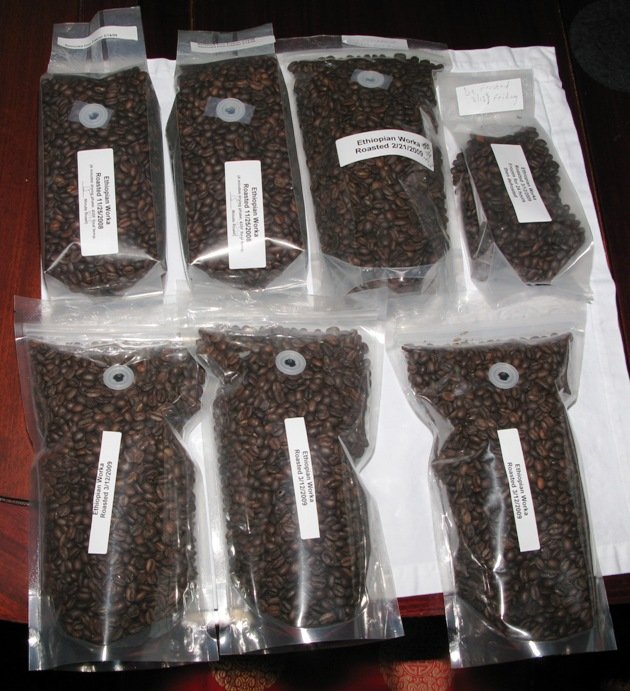 In triangle cupping, neither Ken nor Jim was able to identify either odd cup. The roasts for this test was suitable for espresso, rather than cupping, so both the fresh and the frozen had aromatics more subdued than a lighter roast's. It could be that frozen coffee is more detectable in roasts suitable for brewing, but that was not the purpose of this test.

In the espresso comparison tasting, we did sixteen side by side comparisons with the older coffee vs. the fresh never frozen coffee, eight by Ken, and eight by Jim, using a factorial design that alternated the pair of machines and grinders between the fresh and frozen coffees in a balanced manner. We preferred the frozen coffee ten times, the fresh four times, with two ties. The results are suggestive, but not statistically significant, even under the severest statistical torture. On the 2nd day, following its own cupping, we did 8 similar comparisons with the coffee frozen for one month vs. the fresh-never frozen coffee. The fresh was preferred three times, the frozen three times, and there were two ties. 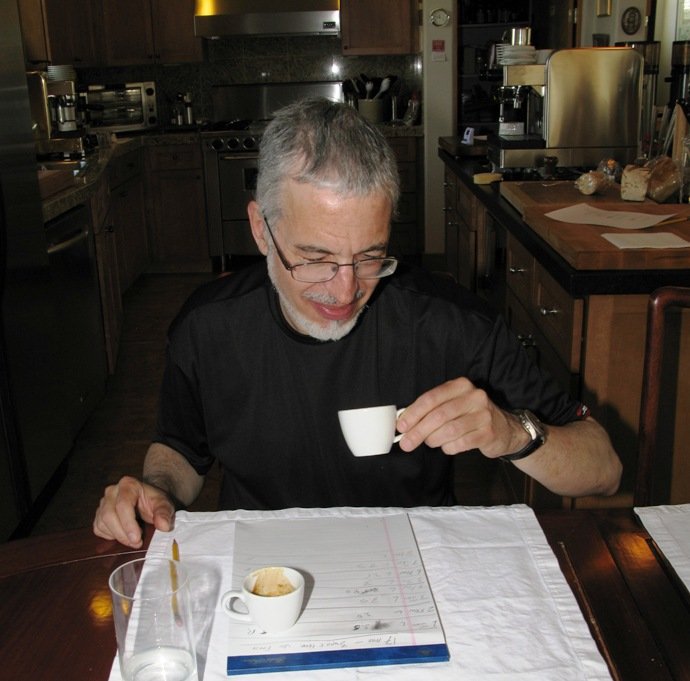 There is absolutely nothing in the results that would suggest that the fresh coffee made better espresso.

There are two possibilities that explain our slight preference for the frozen coffee, if indeed that preference was meaningful. The first is the more radical one that green coffee stored in a 50F basement degrades more rapidly than roasted then frozen coffee in a chest freezer. The second is that the flavor of frozen coffee, after being taken out of the freezer, peaks at a different rate than fresh coffee out of the roaster. We may have tasted when the frozen coffee was at its peak and the fresh was not.

But none of this affects the main conclusion, which is: Many things affect the taste of coffee. Freezing has an effect in the same order of magnitude as storing green coffee at room temperature, or of coffee resting in the first week after the roast. Since neither of these is regarded as particularly deleterious to the flavor of espresso, freezing should not be either. Freezing remains a viable method for the preservation of coffee roasted for espresso, for a period of at least 4 months.

Ken Fox and Jim Schulman
What, me worry?

I was surprised by this result. I expected the more floral coffee, the lighter roasts and better grinders would make picking out the frozen coffee easy -- it would be the one that smelt flat, tasted bitter, and had all the other flaws of slightly stale coffee. But that was simply not the case. Instead we split on which coffee tasted rounder, or smelt better, etc. etc.

It seems unlikely that freezing and defrosting has no effect at all on roasted coffee; but I think, given these results, it is impossible to claim that the effect of freezing is larger or more harmful than any of the other things we do with fresh roasted coffee in the first week of its life.
Jim Schulman
Top

Great follow-up to the original study! Many thanks for your hard work.

I'm also surprised (but pleased) by the result. To date, I've been freezing coffee on the premise that it's the lesser of two evils (vs. letting it go stale). Now I can freeze my roasts and claim it's part of getting a better cup!
John
Top

I'm not surprised by the results at all. Home use been freezing roasts a couple decades. Pulled quite good tasting shots with copious crema from a full year frozen coffees. One of the big challenges in a commercial setting is how much a batch will change over a week or so use. I solved the problem in my cafe by freezing main blend at 7 days rest. Pull from freezer the day before hitting the grinder. Though in this scenario no long term freezing, usually a week or so.
Mike McGinness, Head Bean (Owner/Roast Master)
http://www.CompassCoffeeRoasting.com
Top

I've been freezing coffee ever since I read Ken's first thread, and, my very limited experience notwithstanding, I think freezing works very well. I began from the simply practical point that I can't drink more than one pound in the time it takes to go stale if not frozen, and if I happen to get two pounds fresh its a must.

Why just yesterday I pulled out the tail end of a frozen bag Musetti espresso (the best-before-date kind of Italian beans, but that's a different topic). Considering the age of the beans before freezing (who knows?) and how long they'd sat in the freezer after opening, I expected a "really, really emergency only" cup of brown water. But I was surprised that they produced a quite drinkable espresso, respectable crema and all.

Thanks for the efforts. Now if I could only get you two to try some commercial Italian blends (not Lavazza!), hand grinders, and antique home lever machines....
LMWDP #049
Hand-ground, hand-pulled: "hands down.."
Top

Excellent experiment. Any thoughts on freezing the coffee in a regular refrigerator/freezer.
Scott
LMWDP #248
Top

peacecup wrote: Thanks for the efforts. Now if I could only get you two to try some commercial Italian blends (not Lavazza!), hand grinders, and antique home lever machines....

Speaking only for myself, I have no intention of ever doing another study like this, especially about frozen coffee!

sweaner wrote:Excellent experiment. Any thoughts on freezing the coffee in a regular refrigerator/freezer.

I freeze coffee from roasters like Terroir, Intelligentsia, and Blue Bottle when the beans arrive by mail (usually within 3 days or so after roast). I freeze the coffee in its vacuum sealed valve bag with the valve taped over, with the valve bag itself placed inside a sealed Ziplock freezer bag. I freeze the coffee in a drawer compartment in a freestanding sub-zero freezer that maintains a temperature of approximately zero degrees F. The drawer is rarely opened and only for a few seconds (maybe 2 or 3 times a week, tops). I defrost (per the instructions in Ken's original article) by leaving the bags sealed overnight, and in the morning when the beans have fully defrosted and I'm ready to brew I remove the tape from the valve and unseal the bag.

Strictly anecdotally speaking, I've kept coffee frozen this way for as long as 6 months and, in both espresso and drip brewing, have never been able to detect any difference between the frozen beans and fresh ones, and once defrosted, the beans are good for a the same period as fresh beans (10-14 days).
Top

This is a nice study. Thanks.

I too suspected that the results would come out as they did based on my past experiences with brewed coffee (not espresso) before I started roasting my own.

I have a question and perhaps a suggestion for improving storage more.

You state
"The test coffees that were frozen were packaged immediately after freezing into plastic valve bags (with the valve taped over), placed into a very cold chest freezer at around -15F, where they reposed until defrosted in these bags couple of days before the comparison tests were conducted. The fresh-never frozen coffee had degassed for 4-5 days before it was used in the test."

The statement implies that you froze the coffee first and THEN placed it into valve bags. If true wouldn't that allow more moisture to accumulate on the beans and also by freezing before placing in the bags eliminate or really slow the degassing which in turn purges the oxygen from the bags? This protocol it seems to me takes away the utility of the bags.

If you insist on using the bags, I might first allow some degassing to purge oxygen, then tape the valve and freeze as quickly as you are capable.

Alternatively, what I do is keep the beans in the valve bag but with the top open and place that into a vacuum bag and seal under vacuum before freezing. I then allow the bags to thaw to room temp when ready to use and only after the first use seal the top of the valve bag for further storage and "normal aging".

Comments?
Top
← Back •
By accessing this site, you agree to the site's terms of service. If you need help with the site, please contact us.