Do you thwack the doser handle fast or slowly?


HB wrote:Ever notice the frenetic "thwack thwack thwack" of the doser handle baristas employ in competition? The sound almost blurs into a continuous buzz. One explanation for this behavior, besides nervous energy and way too much caffeine, is that the rapid advancing of the doser vanes helps agitate the grinds exiting the chute.

Do you thwack the grinder's doser handle fast or slowly?
Dan Kehn
Top

I do it slowly. I have noted the Mazzer Mini's tendency to throw the grinds to the left if I do it too quickly. With a slow movement I get all of the coffee in the PF basket instead of having some of it end up on the counter...

I only ever use a doser (Mazzer) when I'm at a local roasterie, so I'm not overly familiar with best practice, but I remember reading a tip that suggested a hard fast doser pull makes the exiting coffee hit the wall of the exit chute and drop straight down rather than fly to left. I'll have to look more closely next time I'm at the roasterie.

I'll let you form your own opinions about the contents of the article...
Top

Fast. Seems to reduce clumping and result in better distribution.

That article is, at best, idiotic and at worst does real damage.
"Taste is the only morality." -- John Ruskin
Top

I thwack with vigor, but do not hit the end of the thwack hard, as that will move the Mini. Some times I let it spring back to knock the grinds off the splines. Having a 58mm PF helps keep the mess down, however grinds get eveeeeerywhere. We can only try to minimize the damage, I'm getting neater as time goes by.

I dose pretty fast, but controlled to reduce strain and noise on the grinder. If you dose too slowly or start late you risk grinding too much.
Coffee
Top

Chalk me up as another thwacker. Framey has stated the reasons. Your alternative is to move slowly, but if you go at a regular speed, coffee is thrown left. Hazel at Coffee Alchemy has a neat little mod on her robur; basically it's just a piece of metal, attached in one of the existing holes for the crappy plastic tamper, that directs the grounds where they should go.
LMWDP #034 | 2011: Q Grader Exam, Brewer's Cup #3, Australian Cup Tasting #1
Top

Used to dose fast. Since I watched a few competitors from the WBC, I dose slow.

There's a certain rhythm to dosing, that you learn by watching the time it takes for one division of the dosing star to fill, then advance the star forward one clack... wait the same time, advance... wait one more, advance...

By the time you get through your third or second sweep, you can turn off the grinder, and finish dosing. It also allows the grinds to fall into the pf in a more moundlike fashion.

I dose into a small container that fits into the PF, so its clean. I just smack away until I've cleared the dosing chamber, and then take a brush to the doser, and thwack away again to sweep it out. Usually pretty fast, as I am unconcerned as to how it falls and cleanliness is no longer an issue. Then I turn the lil container over into the yoghurt cup liner. Clumping and distribution courtesy of the dissection needle from a certain coffee fanatic, and VOILA, I'm done. 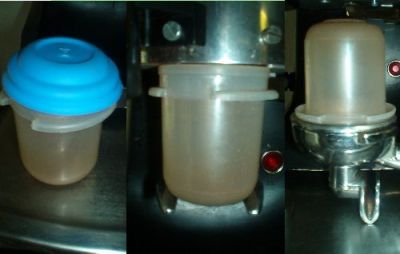 The lil cup, the cup in the PF fork, and the cup up-ended into a PF (or you could just empty it into the yoghurt cup)
The container is from Anchor Hocking, but I think Rubbermaid has a similar one.
Espresso Sniper
One Shot, One Kill

LMWDP #175
Top
← Back •
By accessing this site, you agree to the site's terms of service. If you need help with the site, please contact us.