I am very new to espresso brewing. Now I am trying to find some consistency with my equipment. I am using a Expobar Brewtus IV-R and a Compak K10 Professional Barista. Using information from this forum I can usually get drinkable shots but not predictably. I am single dosing by weight into VST baskets and a bottomless portafilter. I also have a thermocouple and digital temperature display in the group head (existing screw hole) just above the screen.

Here is my current problem. I have Red Bird Espresso beans one week off roast. I have the temperature set for 198 degrees above the screen. I am pulling shots of about 34 grams from 20 grams of coffee in a 18 gram basket in 20 seconds. I have to shut it down at 20 seconds because my cup is full of crema.

At this temperature and speed I expect under extracted shots. What I am getting is a beautiful, rich, and exceedingly bitter (over extracted?) shot.

I suspect that problem with consistency may be that I do not understand this. It seems to need a finer grind and/or lower temperature. Red Bird suggests 198-200 degrees and 25-30 seconds. I am already at or actually lower than 198. Grinding finer should cause even more extraction.

What do I have wrong?
Top

Bitter is not usually over-extracted, it's usually under-extracted -- a sign you haven't extracted enough caramels to balance the flavors. Redbird lacks a lot of inherent sweetness and uses a Brazil with an extremely sharp finish, so it is best to drop the dose, or to use a triple and grind it very fine.

Extreme over-extraction will create a dull bitter flavor, like instant coffee, bad ristrettos or coffee that has been sitting on a hot plate for few hours. This is caused by the hydrolization (cracking) of long chain compounds by the action of heat, acidity and time. But a double boiler machine set under 200F shouldn't have this problem, even on longer shots.
Jim Schulman
Top

Thanks Jim. I thought that this advice, "If the coffee is too bitter... grind coarser", is saying cut back on the extraction. It is discouraging to realize I had it backwards.

another_jim wrote: Espresso 101: How to Adjust Dose and Grind Setting by Taste.

Am I the only person who thinks that a 20 second extraction seems a bit too fast? I have not worked with this particular blend, so I could be wrong.
LMWDP #532
Top

You're right. Definitely pull tighter. 20s is a little too fast. Try aiming for 27-32 seconds instead(especially if Brewtus has preinfusion). I usually wouldn't fiddle with temperature so much before I get a flow rate of 1.75oz/ 25-30 seconds.

Also, did you try using a normal double basket instead of VST? I read that VST requires much finer grind and maybe it doesn't work so well with that particular coffee?
Top

It sounds to me like your drink is under-extracted, but rather than tasting sour, as you would think it should, it tastes bitter to you.

This doesn't surprise me in the least. I think a lot of people (including me) have difficulty accurately identifying exactly what they're tasting in a poorly extracted espresso, especially when the shot runs in the typical espresso region of 20-30 seconds. If the drink isn't extremely sour, it can be hard to tell whether you're tasting sour or bitter, particularly if you use a large dose and pull ristretto. When in-your-face flavors are assaulting your taste buds, your tongue can get really confused. FWIW, I recently read that the old tongue-region method of telling the difference (bitter on the tip of the tongue and sour on the rear sides) doesn't actually work.

From Jim's reply and his earlier posts that you quoted, my sense is that there are different classes of bitter tastes that show up in espresso, some early in the shot and some later, and that even though both fall into the bitter classification, they're not the same. Perhaps this explains the taste bug confusion.

The difficulty some people have in determining whether an espresso is under-extracted or over-extracted is one reason that a coffee refractometer is a great learning tool for many of us with less-than-superior cupping ability, but that's another subject.

The clue here is that your shot time is pretty fast. There are coffees that pull well in 22 seconds, but maybe Redbird isn't one of them. I think the simplest thing you can do is try grinding finer and let the shot run, say, 25 seconds. Then try grinding finer to get a flow time of 30 seconds. The flavor will be very different, and should provide some clues as to which direction you need to go. It's perfectly normal to vary the grind to find the right balance.
Top

You are misreading my post and quoting the wrong section. For a normally flowing shot, extraction is determined by grind setting, nothing else. The order of extraction is as follows: 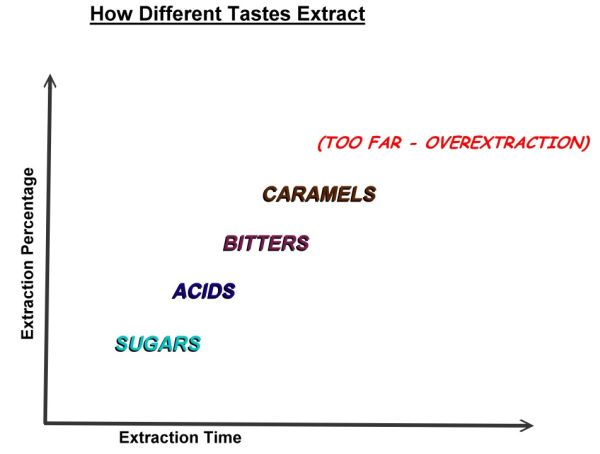 Redbird has almost no acidity; it also uses a fairly rough Brazil that cups bitter and astringent. You need to extract every last drab of caramel to give it the chocolate tastes its proponents value.

The overextraction listed on the graph is a flaw: you can extract too far and get a blah drink with too many caramels. Overextraction on the other hand tastes like instant or cooked coffee. This is not very likely on a DB, since the shot doesn't cook if you choke it.

The balance between bitter and sour is basically set by the coffee and roast; and in Redbird, it's almost all bitter. You can slightly tweak this bitter/sour balance by changing flow or temperature, but more and more I'm getting the sense it cannot be done nearly as well or reliably as tweaking the (bitter+sour)/sweet balance by manipulating the extraction.
Jim Schulman
Top

Jim, thank you. I finally understand what you have been telling me. Now I have to re-read a few threads.
Top

You are tasting something that loyalists to Redbird are not tasting. It seems to me that you have praised Daterra Farms coffees in the past and this is where Jeff buys a large quantity of his beans, including the Brazil that he uses in Redbird. Is there a small possibility that you could be wrong? Have you discussed this with Jeff? If not I would suggest that you give him a call. Taste is subjective and how could you be right and everyone else be totally off base.


another_jim wrote:Bitter is not usually over-extracted, it's usually under-extracted -- a sign you haven't extracted enough caramels to balance the flavors. Redbird lacks a lot of inherent sweetness and uses a Brazil with an extremely sharp finish, so it is best to drop the dose, or to use a triple and grind it very fine.

Extreme over-extraction will create a dull bitter flavor, like instant coffee, bad ristrettos or coffee that has been sitting on a hot plate for few hours. This is caused by the hydrolization (cracking) of long chain compounds by the action of heat, acidity and time. But a double boiler machine set under 200F shouldn't have this problem, even on longer shots.