Adjusting flow rather than dose & grind

However, I find myself doing mental gymnastics when using the diagram to correct a shot for a couple reasons. First, I typically fiddle with grind & dose b/c I'm unhappy with the taste of the shot; so beginning with a "balanced shot" throws me off. If it were balanced, I wouldn't be trying to change it. Second, when pulling a shot, I think of "flow" rather than dose & grind -- perhaps because I start with a standard formula (~15.5g grinds in; ~30g H20 out) on my volumetric machine.

This morning I constructed a rough diagram based on the idea of changing an initial shot by adjusting flow. I haven't tried it in practice but would be curious if folks feel this accurately captures the concepts of the original threads. 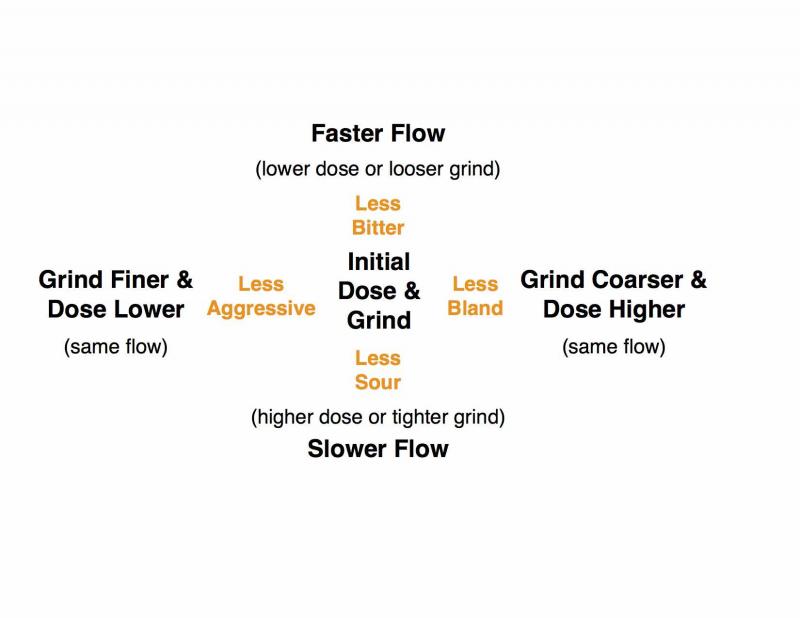 Ingenious. That reduces the backwards thinking for sure.

What about brew temperature to modify bitter/sour?

Since you're trying to target a balanced shot and, as you initially stated, you're not starting there, perhaps what you want to say in the center of the diagram is "balanced" rather than initial, and the work your way in. I don't know, it's just a suggestion, so whatever works for you.

Regarding the term aggressive, I kind of think of that in regards to mouthfeel, but even if one were to think of it in regards to flavor "punch", a higher dose gives you more, while a lower dose ground slightly more coarsely gives you less, i.e., should be smoother.
Top

DanSF wrote:This morning I constructed a rough diagram based on the idea of changing an initial shot by adjusting flow.
<image>

I like it. People's intuitions work in different ways; and this diagram may be more intuitive for some than Dan's. The first thing you learn in statistics is being able to visualize procedures and data fast and accurately is the first and most important step to understanding something complicated; and for this one size definitely does not fit all.

(Update) I've added it to the FAQ. Thanks for posting it
Jim Schulman
Top

I like it, too. Makes total sense to me.
Top

I believe you're right, if you don't change the time. Maybe using Al's rule the extraction would change? Also, maybe that's just how ristrettos are...

Coarse grind/high dose ristrettos are generally underextracted. When you move to finer grinds, the problem tends to go away.

One major thing that does not come out either in my discussion, or on any of the diagrams, is that the margin for error decreases as you go to more extreme shots, either in grind, time or volume. My excuse is that point of these charts is to give beginners and inermediate hobbyists a strong sense of the extraction space and how changing different variables will effect the taste. Dealing with extreme roasts, extreme grinds, doses, shot times, temperatures or pressures, is the next step.
Jim Schulman
Top

That is exactly my question in posting this. Do I have it backwards or sideways or...? The way my mind works is that particle size (grind) and number (dose) are the easiest variables to manipulate in a consistent way. My conceptual framework is:

DOWN: an under-extracted shot tastes sour so make the particles smaller (finer grind) or put in more of them (larger dose) to reduce the sourness; pushing the same amount of water through this puck will result in a slower flow (longer shot time to achieve the same 50% brew ratio);

UP: an over-extracted shot tastes bitter so make the particles larger (coarse grind) or put in fewer of them (small dose) to reduce bitterness; pushing the same amount of water through this puck will result in a faster flow (quicker shot time to get a 50% brew ratio).

I actually have no idea if the horizontal axis is true. Most of my taste problems are related to bitter/sour. I've also tried using Al's rule but it didn't work for me because it added shot volume to the mix -- too many variables and the solution became unidentifiable (others might be able to bootstrap or maximum-likelihood their way out of that problem). 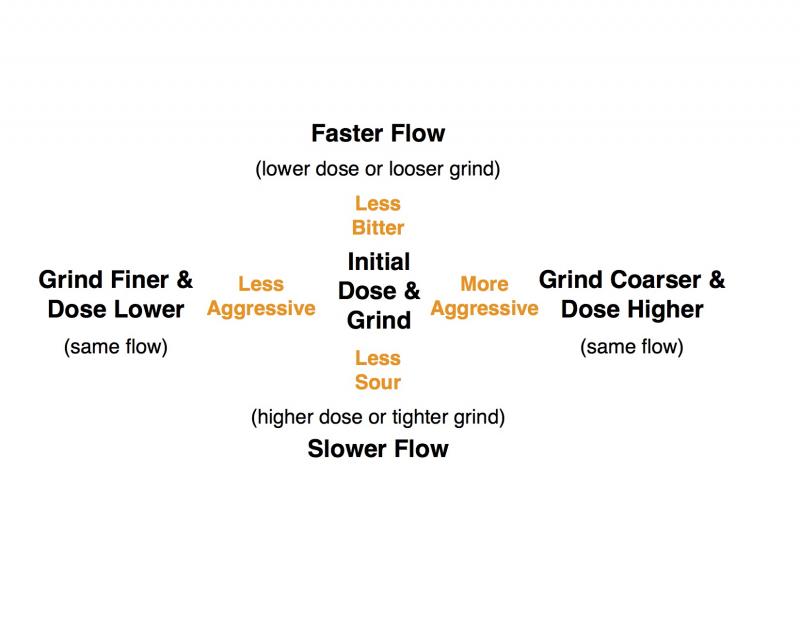 I like your written explanation in the above post (for some reason it wouldn't include the whole thing in a quote). If the chart works for you, great! As Jim said, different people need things explained/referenced in different ways...and I'm sure other will relate to the chart well and find it very useful.
Top
← Back •
By accessing this site, you agree to the site's terms of service. If you need help with the site, please contact us.