Coffee: To Freeze or Not to Freeze

Editor’s note:
Ken Fox and Jim Schulman repeated the experiment described in this article in March of 2009, with some modifications that extend the usefulness of the results to include lower dosing, a longer interval of freezing, and the use of higher end grinders. They published their results in the forums under the title of Freezing Espresso Coffee, Part Two. Jim elaborated on how to correctly interpret the results of such experiments in A note on comparison tests. —HB 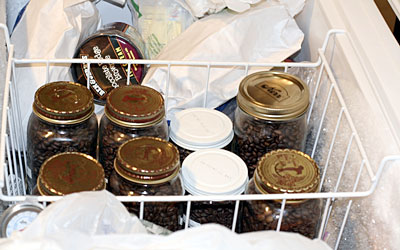 Coffees stocked on grocery store shelves are frequently labeled with "Best By" freshness dates that represent anything from days to months after actual roasting. The coffees sold from open bins may turn over quickly, but frequently are not fresh when stocked and regardless will suffer from light exposure and oxidation. There are few choices for coffee aficionados who prize freshness.

When coffee aficionados talk about freshness, what do they mean? What are they looking for? It goes without saying that espresso made from fresh coffee has more flavor, aromas, sweetness, and produces richer and more voluminous crema. What's not obvious to all espresso lovers is the fact that fresh coffee is easier to extract correctly. Telltale signs of stale coffee are flat, monotonic flavors, bitterness, woody / cardboard tastes, and little or no crema. Any experienced home espresso enthusiast has experienced these things first hand— bleech! If you're serious about exceptional espresso, it starts with exceptionally fresh coffee!

Sourcing truly fresh coffee can be difficult. The options include:

Whether you roast coffee at home, purchase it locally, or buy it online, proper storage is important. Storage for a few days is straightforward for small quantities of coffee, but what about longer term storage of larger quantities? Freezing slows the relentless degradation of many perishable foods. This article attacks the question, "How well does it preserve the precious characteristics of fresh coffee that espresso lovers adore?"

Few topics in coffee have been debated as much as freezing. Coffee has a limited shelf life, even shorter when it is used to make espresso. Most serious enthusiasts feel that this shelf life is considerably less than a month, and many agree the shelf life at room temperature is limited to as little as 10 days after roasting. There is no evidence that simple valve bag packaging at room temperature significantly extends storage life for consumers who care about coffee freshness. Given its perishable nature and the fact that many consumers have limited access to good fresh coffee, it is only natural to want to extend the shelf life long enough that a given batch can be considered usable, near its peak of freshness.

Freezing and refrigeration of roasted coffee are hotly debated based on anecdotal experience. Some academic research has been published, most notably by Sivetz, however his methods, including the use of a vacuum and extreme cold (~-40°F or C) are not available to most individuals, especially in the home.

I prefer to make several batches in succession with my 500 gram sample roaster because of the required heating and cooling time, which makes small volume roasting impractical. As a result, I've adopted freezing as a storage technique, and am constantly switching back and forth between previously frozen and never frozen coffee. I have not noted an obvious difference between these coffees prepared as espresso, however I wanted to formally test my observations. This article presents the structure and results of an experiment to demonstrate the effectiveness (or lack thereof) of freezing very fresh coffee in a home environment to extend the shelf life of this perishable product.

Key elements of a meaningful test 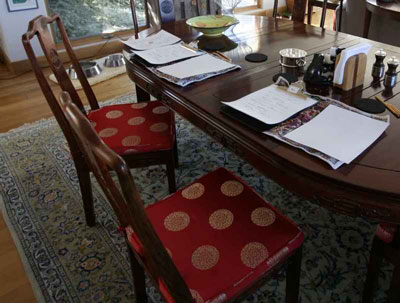 An ideal way to compare two different consumable items is to be presented with both of them simultaneously. This is the very nature of blind tasting experimentation. Fortunately I have two similar espresso machines that can be adjusted to produce nearly identical espresso extraction parameters. Since I have the good fortune to own this equipment and the desire to get to the bottom of this freezing issue, I decided it was high time to explore this subject in a more scientific manner. Out of this curiosity was born this experiment, a definitive blind tasting trial comparing espressos prepared from coffee that was previously frozen for periods of four or eight weeks, to freshly roasted coffee during its normal shelf life, in this case between 4 and 8 days after roasting.

As in any study using the scientific method, one has various factors that may confuse or confound the results. Failure to account for the variables may result in false impressions of real differences when in fact none exist, or may mask real differences. It is therefore important to consider these variables in the design of the experiment from its very conception. By doing so, one acknowledges their presence and sets up the experiment in a way that these variables cancel themselves out.

Last but not least, the experiment itself must be designed in a way to test the manipulated variable, to balance those factors that might confuse the results, and to be practical.

We held four tasting sessions, each lasting approximately three hours. They were composed of 16 paired double shots prepared consistently and simultaneously on the two espresso machines and presented to the taster in a blind fashion. The taster did not know which coffees he was tasting or which pieces of equipment were used, just that one espresso was made from previously frozen coffee and the other was not. Each taster would have 8 paired shots to taste in a day's session; 4 pairs of shots compared coffee previously frozen for 4-weeks to never frozen, and the other 4 pairs of shots compared coffee previously frozen for 8-weeks to never frozen. Grinder changes were minimized as much as possible in the design to both avoid wasting coffee and the need to constantly clean grinders. The shots were alternated to the tasters so that the tasters did not have undue fatigue of their ability to appreciate differences in espresso. This was important because espresso is a very intense beverage, and too many comparisons within a very short time can diminish the ability to appreciate differences. A total of 64 paired shots of frozen versus never frozen coffee were tasted and compared over the four day course of this experiment.

When presented with the two espressos, the taster was required to compare them according to three factors: the crema, the intensity of the aroma and taste, and the overall preference. These tasters were instructed to make these comparisons quickly but carefully, in keeping with the way that such comparison taste studies are done in industry where this method is very well established.

A few additional words about the shot preparation and the freezing are warranted. Double espressos were prepared with approximately 18 grams of coffee lightly tamped and ground in a way to produce 1.25 to 1.50 ounce shots within a period of 20 to 30 seconds, occasionally as long as 35 seconds, with very few shots at the shorter end of this spectrum. The previously frozen coffee was frozen immediately after roasting in a very cold chest freezer, at a temperature of around -15°F (-26°C). Frozen coffee remained in the freezer for periods of either four or eight weeks.