Coffee: To Freeze or Not to Freeze
Procedures and Results

The following is an outline of the testing procedure; the actual execution of the experiment was considerably more complex and is given in the Test Design Details at the end of this article.

Both espresso machines used identical bottomless portafilters (obtained from espressoresource.com) and double baskets; no attempt was made to use either portafilter exclusively with either machine. In order to minimize inter-shot variability, I prepared all of the portafilters myself, including the grinding, dosing, and distribution of the coffee, plus the tamping. In practice I consistently overdose my double baskets with approximately 18 grams of coffee and use a very light, approximately, 5 pound tamp with a near-piston fitting tamper.

At the commencement of the production of each shot pair, I flushed each machine of 50 milliliters of water into a measuring cup, then inserted the portafilters. Identical pre-warmed white Revol porcelain espresso cups were positioned under the portafilters and the shots were started within a second or two of each other. A shot timer was started at the same time, and I strove to keep the shots within a duration of 20-30 seconds each. I personally watched the initiation of each shot to be sure that it started normally, generally with first drops of espresso dropping off the basket underside after 6 or 7 seconds. Once the shot was seen to be progressing normally, I either completed it in the case where another person was the taster, or if I was to be the taster I turned the remainder of the shot production over to my fellow taster.

When originally conceived, this experiment was going to be done with myself and Jim Schulman serving as the two tasters and baristas. Unfortunately, Jim needed to change his plans and could not attend, so I enlisted the aid of two espresso loving friends, Bob and Randy. These friends were given a crash course in espresso preparation on my equipment, and instructed on the proper shot volume and appearance that was desired, e.g. 1.25 to 1.5 ounces, and to cut the shot at the first sign of blonding. Neither Bob nor Randy initiated any of the shots or did any preparation of the portafilters, a job I reserved entirely to myself in order to keep shots as consistent as possible. Their role in shot making was limited to turning the machines off at the appropriate time, and to serving the shots in an identified but random order.

Jim Schulman kindly provided a program for randomizing the effects of the two different espresso machines and two different grinders. Each day, both I and my fellow tester had a program sheet that gave the conditions (machine, grinder, coffees) to be used on each shot comparison. In order to have a truly random order of shot presentation, right vs. left, each tester used a coin toss for each pair to determine which shot would be presented as the "right" shot and which as the "left." The person tasting and grading the shot did not know what was in the "right" or the "left" shot other than that one had been made from a previously frozen coffee and the other from a fresh, never frozen coffee. Only after the testing was completed each day was each taster's scoring sheet decoded with the sheet used by the other tester who presented the shots in the order determined by the coin tosses. Here is the model program sheet that was used throughout this experiment:

When presented with the two side by side shots, it was the job of the taster to rate them according to the parameters previously described. A completed scoring sheet produced in this experiment is pictured below.

Variables Beyond Freezing That We Could Evaluate

Although the identified variables such as grinder burr condition, espresso machine used, or taster, were intended to cancel themselves out, in essence becoming irrelevant, Jim's experimental design nonetheless allows us to study them separately later for any interactions they may have with what we are studying (previously frozen vs. never frozen coffee) as well as for any importance they may have independently. 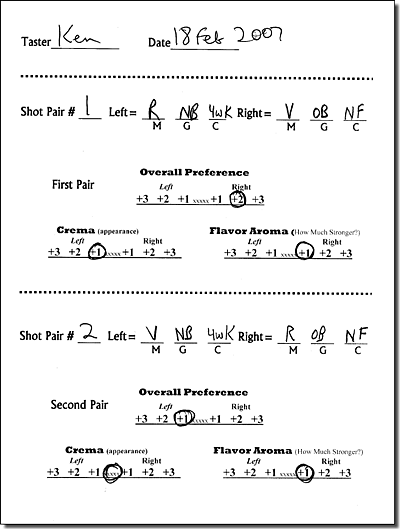 I'm going to limit the technical and statistical minutia presented here since the results were "negative," which is to say that there were no statistically valid differences shown. Jim Schulman and I are planning to write another article dealing with experimental design and the scientific method as they apply to research into coffee and espresso. We will use this study and some of its more detailed results as examples in that paper. If you are interested in seeing the raw data obtained in this study, it can be found in both table and graphical form in the section at the end of this article.

When the results were examined according to the three scored parameters, the overall preference, the crema, and the intensity of the taste and aroma, no statistically significant differences were noted among the coffees studied or the other variables of the study. What this means is that none of the tasters could consistently differentiate among the shots made with previously frozen or never frozen coffee. Similarly, none of the tasters could consistently tell the difference based upon whether the shots came out of the newer rotary pump driven or the older vibratory pump driven espresso machine, nor between the two grinders, one of which had brand new burrs and the other with more heavily used burrs.

Having participated in this trial myself, and having tasted one half of the test's paired shots (32), I knew full well that each pair included one espresso made from previously frozen coffee and one espresso whose coffee was fresh and never frozen. Nonetheless in most instances the shots were of nearly indistinguishable quality and any attempt to score one above the other required imagination or discerning fine differences that may or may not have existed. On a number of occasions I became convinced that I'd figured out the taste characteristics of previously frozen coffee. Then, I'd try to pick it out on subsequent shots. At the end of the day when the randomization scheme was disclosed, I realized that I had in fact not figured out how to differentiate between the coffees, as evidenced by the random nature of my preferences! During the conduct of the tasting trials I received similar comments from my fellow tasters; they were certain that they had "figured it out," yet when we unmasked the data it was clear that they had not.