Does anyone blend different roast levels of an SO?

So I'm out in the garage this evening watching a nice Yemen SO spin around and around in my HotTop and I wonder to myself: "Does anyone blend different roast levels of an SO?" That is, say roast half of my Yemen SO batch to City + and the other half of the Yemen in a different batch to Full City + (or whatever) and then mix them together? Still an SO but perhaps able to bring out different aspects of the bean by combining differing roast levels...

Well gotta go and fetch said Yemen SO out of the cooling tray!
Top

Split roasts for single origin will yield a more complex cup character. You will need to manage the individual roast levels for the different batches, and also manage the ratio of light to dark. Play with it and have fun.

You also may want to try blending from two separate deliveries, regions, qualities, processing methods, etc from within the origin to create a more dynamic profile. This will not work if you desire a single origin from a single estate or farm, a single origin from a specific quality, etc... However if you just want Yemen than you have a multitude of options to play around with.

Just my two bans worth.

Thanks Spencer. Now I know what the official name is for what I was wondering about- "split roasts".

Armed with this information, I can now do a little more research...

Despite people pushing the idea; I doubt that split roast levels are commonly useful. This is based both on experiment and reason. You'll have to take my word on the experiment part; but the reason part is worth considering.

To even consider a split roast, there has to be a flavor or flavors that are best at a light roast level, and another set that are best at a darker roast. But this isn't enough. Suppose the preferred roast light roast levels drop in a convex curve (bowed outward, like the graph of a square root), and the preferred dark roast flavors rise in a convex curve. Then an intermediate roast will have more of both than a mix of a light and dark roast. The only time a dual roast pays is if the flavors are rising or falling in a concave curve (like the graph of a quadratic).

In general, logic dictates that flavors appear and disappear in roasts in a bell shaped curve, starting fast and concave, then slowing down to a gentle convex rise, then over the top to a convex fall, then slowing to a concave fall. In this case, it makes sense to mix very different color roasts, so the flavors are far apart and divided by concave portions of their curve, but not for roast levels that are close, with the curves overlapping in their convex section.

This is easier to see than to describe: 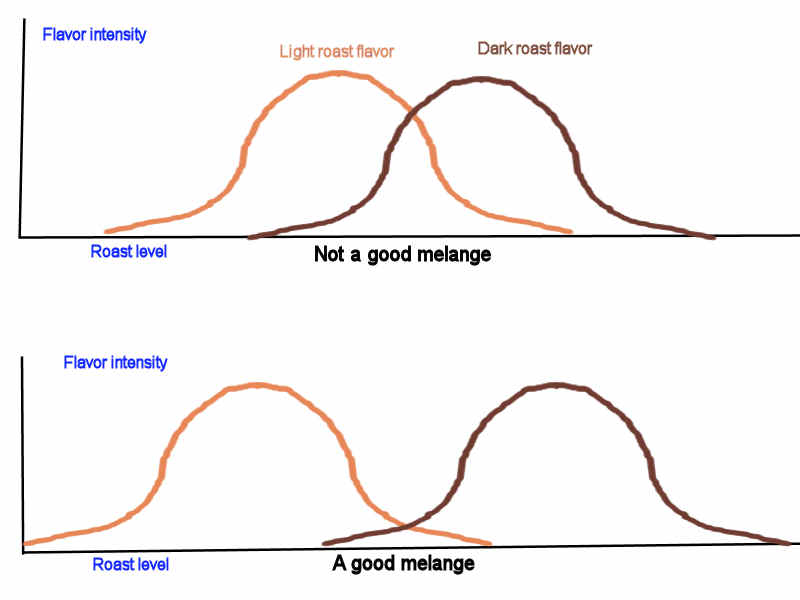 When it comes to Yemen, melanges make even less sense, since they roast so unevenly, that even a single roast is a melange!
Jim Schulman
Top

Indeed a picture is worth the proverbial thousand words. Your post makes perfect sense and echoes the sentiment of many that I have now read since learning the term here "split roast".

Agreed on the Yemen, it just happened to be what I was roasting at the time of my daydreaming and wondering...
Top

another_jim wrote:In general, logic dictates that flavors appear and disappear in roasts in a bell shaped curve, starting fast and concave, then slowing down to a gentle convex rise, then over the top to a convex fall, then slowing to a concave fall.

Why? Why fast? Why concave? This isn't "logic" - it's pure speculation, unless you have some repeatable method of quantifying the taste versus roast levels. Or, unless you can prove the beans took calculus and believe in quadratic equations as their preferred method of flavor response.
Top

I suppose you also have to deal with the best brew temperature for each part of the split roast. What if the lighter roast is better at 94C and the darker is better at 92C? Blend them together, and the chances of brewing a decent cup are very slim. Perhaps that is why some roasts are very temperature sensitive - there is a very narrow temperature band over which all the beans will brew nicely.

When people talk about blending (BASH, etc.), I'm surprised that the suitable brew temperatures of the component beans and roast levels are not prime considerations in putting a blend together.

swines wrote:Why? Why fast? Why concave? This isn't "logic" - it's pure speculation, unless you have some repeatable method of quantifying the taste versus roast levels. Or, unless you can prove the beans took calculus and believe in quadratic equations as their preferred method of flavor response.

These are not quadratic curves, but end to end sigmoid growth curves. Flavors are produced and destroyed by chemical reactions which start slow, pick up steam (if they are autocatalytic, which Maillard reactions are), then slow down again when they run out of raw materials (try producing "ash flavor" by setting something on fire to see what I mean). One or more such reactions produces the flavor giving the rising side, then one or more destroy it, giving the falling side. My illustration is biased since the plateau can be long or short, and the fall need not be symmetrical with the rise.
Jim Schulman
Top

Roast profiling the beans can give you many different approaches to developing the flavors in the beans. While there may be one "best" roast profile for a certain bean; other bean types may successfully take multiple roast profiles giving different flavors. It then becomes the roaster's choice that several roast profiles for the same bean and blending the roasts gives a better overall flavor than a single roast level. In effect, this is using a single origin to create a blend instead of multiple bean varieties - and this approach is not endemically counterproductive in every case.

My point being, the graph illustrates only one flavor case and cannot be applied ubiquitously as a universal, simple answer for every bean.
Top

k7qz wrote:Thanks Spencer. Now I know what the official name is for what I was wondering about- "split roasts".

Armed with this information, I can now do a little more research...

The actual name (or another name) for it is melange roast. And I agree will sometimes yield a more complex cup of the same SO.
Mike McGinness, Head Bean (Owner/Roast Master)
http://www.CompassCoffeeRoasting.com
Top
← Back •

Sponsored by Urnex
By accessing this site, you agree to the site's terms of service. If you need help with the site, please contact us.