Here at Team H-B, we pride ourselves on our equipment reviews, and go to great (some might say bizarre) lengths to evaluate new espresso gear. A prime example is the Titan Grinder Project. Not only did we plan on pulling and tasting thousands of espresso shots, but we also considered techniques for quantitatively evaluating grinder performance. Two ideas that became reality were grind size and shape measurements.

Grind particle size is undoubtedly one of the most critical factors in a good grinder. Particle size distributions are being measured for the Titan Grinder Project, and are discussed on another thread. But what about particle shape? Might it play a role as well?

To answer that question, we turned to a really cool tool: the scanning electron microscope, or SEM. This instrument is capable of producing dramatic images of small objects at high magnifications. Unlike a light microscope, in which a beam of photons creates the image, the SEM uses a beam of electrons to achieve great resolution and 3D-like images. And what could make a better image than coffee grinds?

With the help of Dr. Ed Duke, a colleague at SDSM&T, I ventured into the realm of the very small: 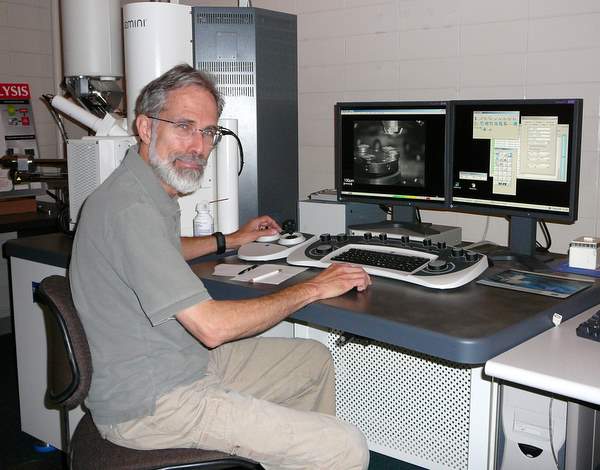 Ed at the helm of the SEM

Ed may not be a coffeegeek, but he obviously likes the stuff: 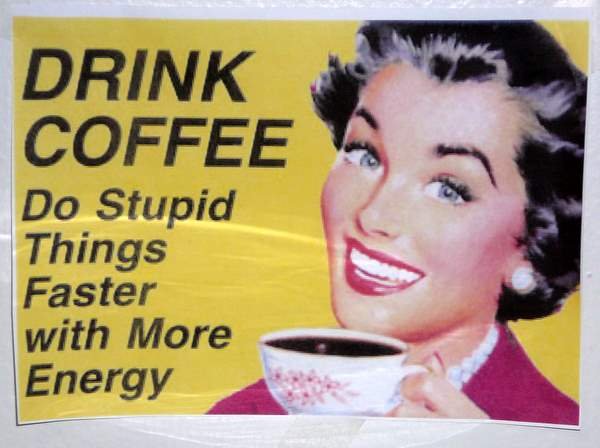 The coffee samples are loaded into the belly of the beast: 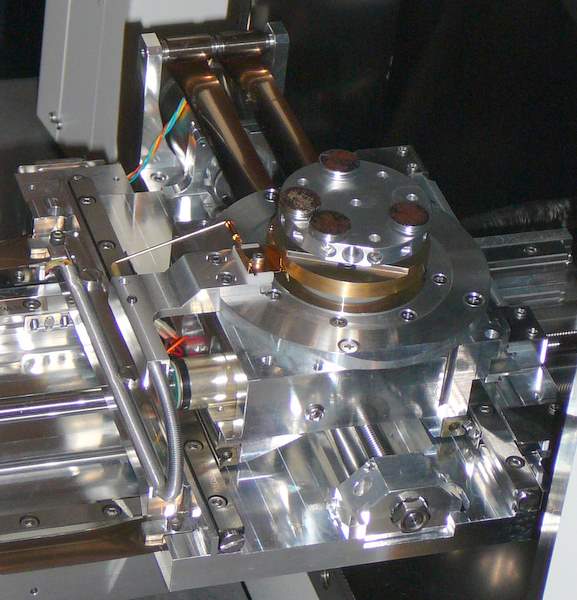 The magnified image is displayed on the computer monitor. You pan and zoom around the sample under control of the computer workstation. Relatively low magnifications (200-800X) were used to image the ground coffee particles. 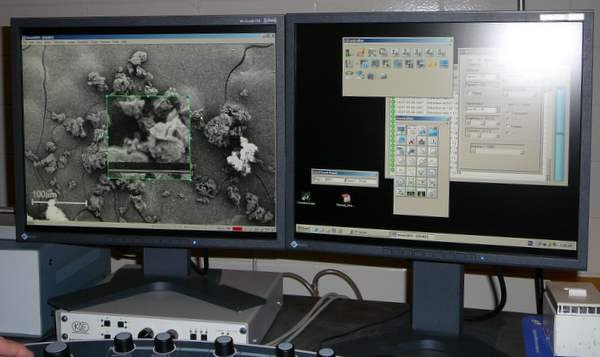 When fragile samples are coated with a thin layer of gold, they can better withstand bombardment by higher energy electrons. Why does this matter? Because higher energy electrons means better resolution. I'm sure you still remember your high school physics: E=hf is a fundamental equation in electromagnetism, where E is energy, f is frequency, and h is Planck's constant. As energy goes up, so does the frequency. But c=wf, where c is the velocity (speed of light for a photon), and w is the wavelength. So as frequency goes up, wavelength goes down. Shorter wavelengths give higher resolution. There, that wasn't so bad, was it? 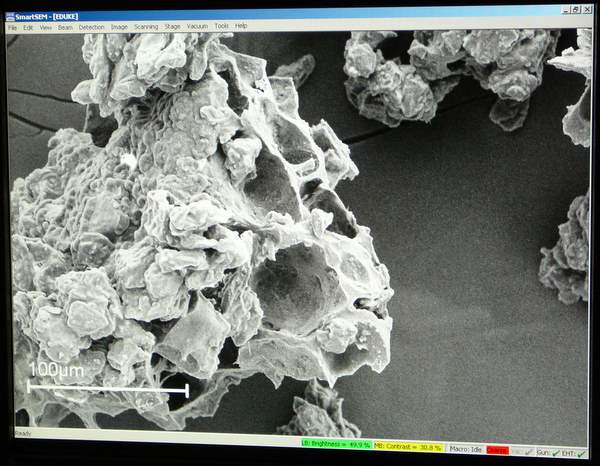 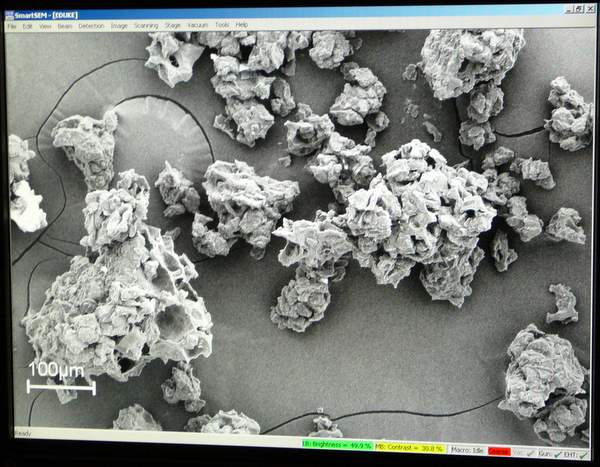 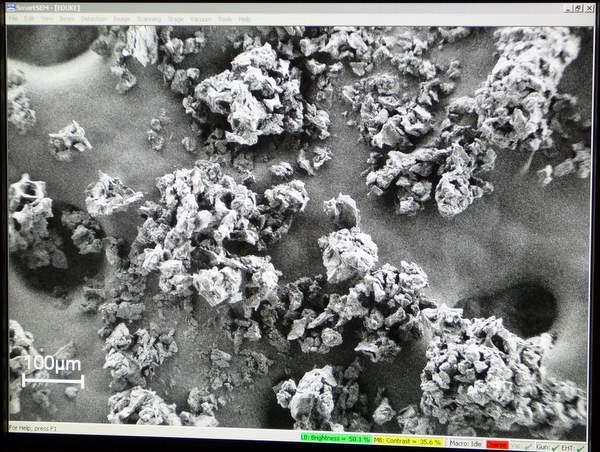 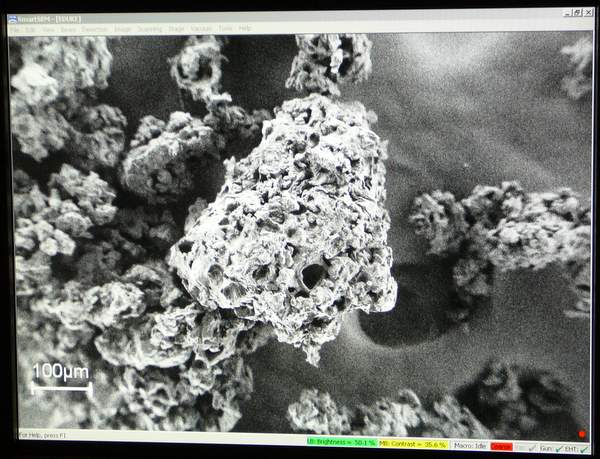 Not bad, but the gold-plated images are better. 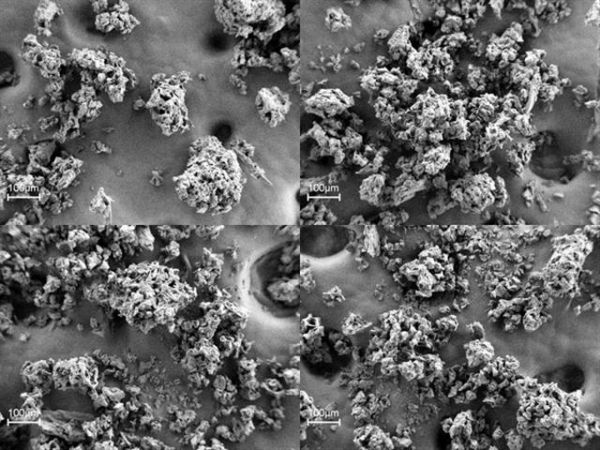 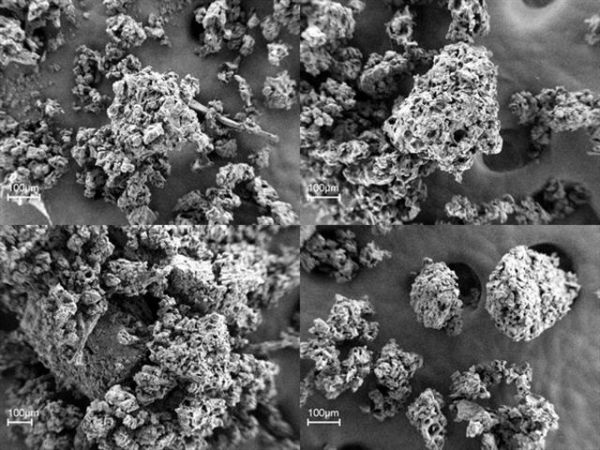 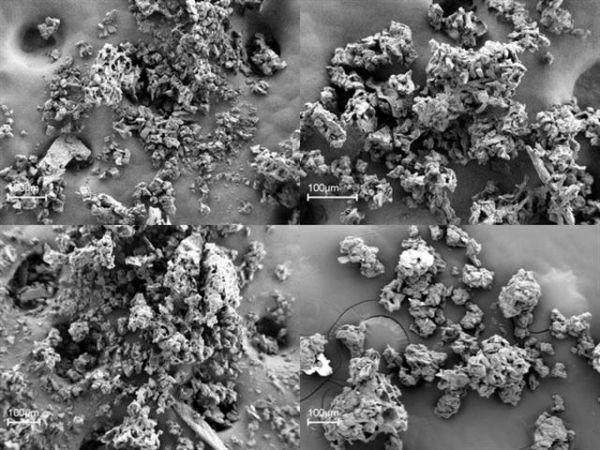 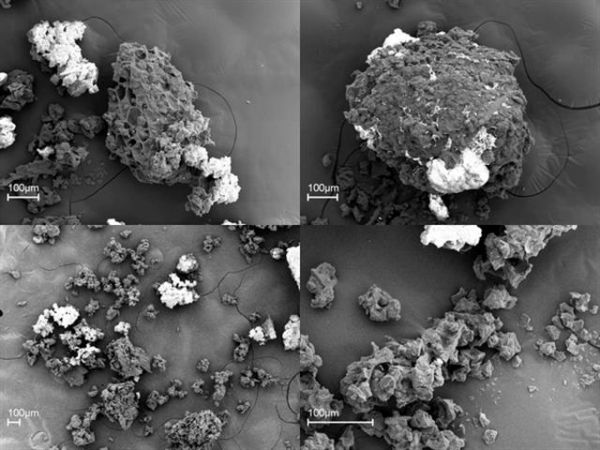 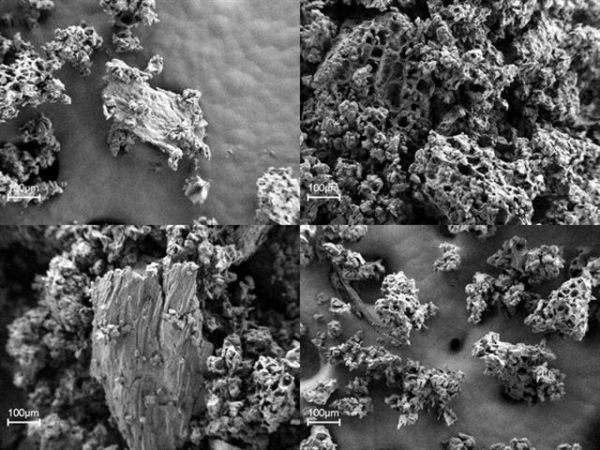 I cannot guarantee that these are representative grind samples. The Super Jolly sample featured a couple of large clumps on the microscope stage; the MXK and Robur samples were better spread out. But it's comforting to note that the SEM particle sizes are consistent with our particle size distribution analyses. The larger particles are 400-500 microns in diameter, and the smaller particles (fines) are 40-50 microns in diameter.

Some speculation:
The large particles appear rounder (more spherical) on the conical grinders, and more irregularly shaped on the flat burr Super Jolly. This could be a consequence of the longer grinding path in a conical burr grinder. After the initial fracturing, the 400-500um particles might still suffer glancing blows from the rotating burrs. These secondary blows could knock off small irregular protrusions, creating fines (small particles) while rounding the large particle shape. A longer grinding path would lead to more of this behavior, and so we might expect conical grinders to produce rounder large particles and more fines than flat burr grinders.

We have indeed observed more fines from conical grinders in the particle size distribution studies. However, it remains to be seen whether conicals produce rounder particles, and what effect (if any) this has on taste.
John
Top

Ah, so yet another variable to explore for effects on espresso brewing. So when can we expect someone to mod a grinder for control of coffee particle shape?

Systematic differences in grind shape will impact how the water flows through the puck; an aggregate of round particles is easier to pack than an aggregate of odd shaped ones, and also forms a better seal when fines act as the "mortar". I'm surprised at how porous the particles look, almost like sponges, and I'm thinking that shape or size might not make all that much difference in the way the coffee extracts.
Jim Schulman
Top

*sigh* Yet another way to embarrass myself in public. "Well, grounds from a conical grinder viewed under an electron microscope will reveal..." "Uhm, Chris? What the hell, dude? Why do you know this? You are a freak!"
I have a love-hate relationship with the total coffee nerds on this site!
Nice job, all around!
Espresso Sniper
One Shot, One Kill

You guys are crazy.

I love it!
Top

Wow that is great stuff.

Any chance of doing a set from a used puck? It would be especially interesting to see them post shot from various parts of the puck. Or maybe before and after shots.
Top

OkcEspresso wrote:Any chance of doing a set from a used puck? It would be especially interesting to see them post shot from various parts of the puck. Or maybe before and after shots.

Um, sure. But let me tell you something about this SEM. The annual service contract alone costs slightly more than the median US household income. Commercial rates are $200/hr. So... how many samples did you want to run?

How many can he run in 12 minutes? Partial hour billing?

A SEM, great yet another coffee thing to buy

Very interesting, I think we'll need to analyze a larger sample size to really start getting a good picture.

Oh, and could you possibly upload some super high res pics from the SEM? Fantastic stuff, thanks!
Top
← Back •
By accessing this site, you agree to the site's terms of service. If you need help with the site, please contact us.