The Speedster is so unique, it's often referred by its name without the preface of its creator, Kees van der Westen. Below is a photo provided by the sponsor of this review that nicely captures its ultra clean modern look: 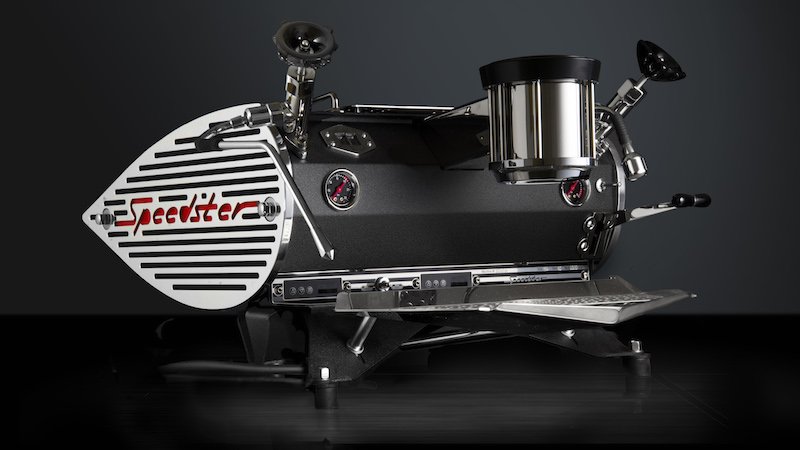 Starting this weekend, I'll review the Speedster's features, usage, and ergonomics. Before wrapping up the review, I'll hold a group test including a side-by-side comparison with a customized La Marzocco GS/3. Stay tuned...

Singular. Detailed. Striking. Sculpted. Modern. Classical. Beefy. Polished. Unique. Artistic. Precise. Bespoke. Detailed. Retro. Sweeping. Serious. These are just a sample of the superlatives that one could apply to the Speedster Espresso Machine by Kees van der Westen. When seeing it for the first time, I noticed many people had only one word to describe the Speedster: Wow.

While I don't know the official backstory for the design, I cannot shake the idea that the teardrop shape of its casing was inspired by a motorcycle tank. In my imagination, the two valves are the clutch/break levers on the handlebars, the grouphead is the headlight, and the driptray represents the footrests. The brew lever with its shift action completes the imagery of a rumbling motorcycle, ready to take off. The contrast of black on chrome with deep inlays reminds me of the accents on muscle cars. 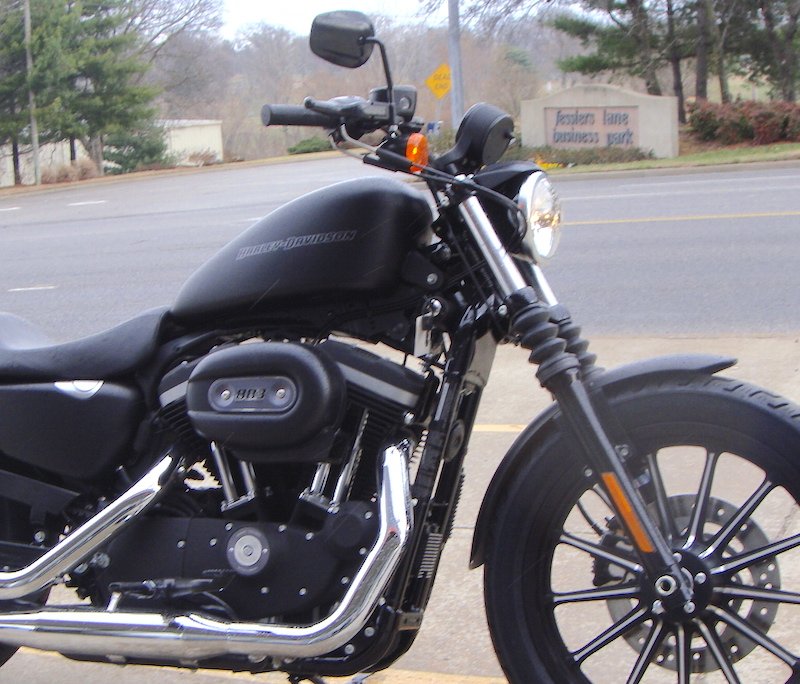 Though the design has a certain retro feel thanks to the old fashioned steam/water knobs, the Speedster is thoroughly modern. PID control for brew and steam boiler temperature regulation including "econo" mode for the steam boiler. Prominent shot timer to the left of the grouphead.

The water wand may appear to be controlled by a turn valve, but it's actually actuated by a toggle switch. That is, the "water valve" on the right is purely for symmetrical aesthetics while the actual control is a switch directly beneath it.

While the Speedster's appearance and workmanship are certainly impressive, after a few day's use, I was equally impressed with its ergonomics. I'll return to this subject later in the review.
Dan Kehn
Top

The Speedster is designed with the assumption it will be plumbed for both incoming and outgoing water. Its external rotary pump is tethered to the espresso machine by a power/control line and long stainless steel braided pressure line. Outboarding the pump/motor and foregoing a reservoir allows the slender teardrop shape of the casing and overall small footprint for a commercial espresso machine of this capacity: 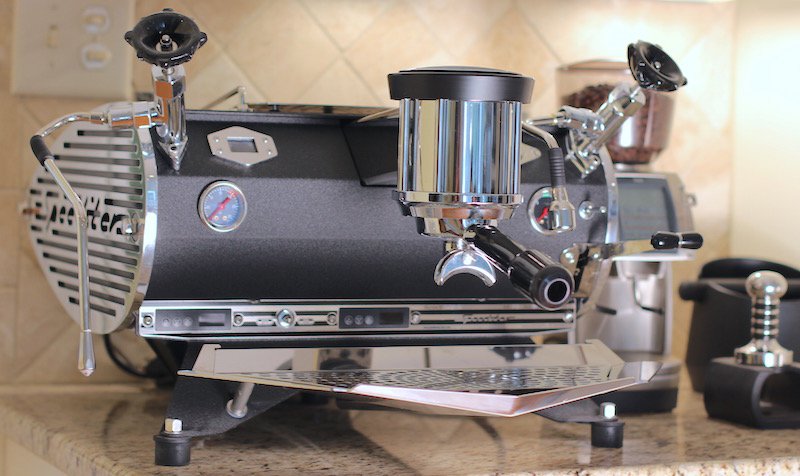 Even the diminutive Baratza Forte in the background is higher than the Speedster's main casing. The driptray is shallow and wide, jutting out over the grouphead so there's no splashing the countertop during a grouphead flush. There's also plenty of clearance underneath the espresso machine and even more above, confirming that it's designed with home kitchen dimensions in mind versus the more "wedged-in look" of some commercial units.
Dan Kehn
Top

The Speedster is shipped in a custom crate. Note that for these types of shipments, it's delivered in a freight truck. Typically the driver will have a hydraulic lift and will deliver to the garage, but they may only deliver to the end of driveway if it's steeply sloped: 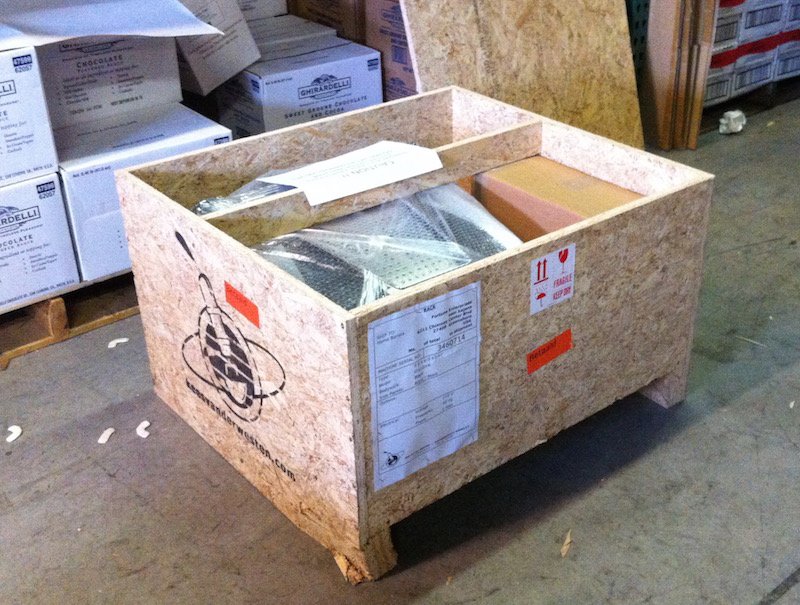 Included in the crate is a box containing all the fittings needed for installation and various accessories.

The instruction manual is well written and detailed; it calls out the importance of water hardness treatment and the accessories includes a starter water softener. I didn't use it since our city water is fairly soft, but it's very important to check if water hardness treatment is required. Sadly too many espresso machines suffer premature problems that could be easily avoided by proper water treatment and "preventative descaling" as required. If you search the forums, you'll find lots of recommendations and also disagreements about how to deal with scaling (e.g., Chris' Coffee says: Don't descale! and "Descaling" vs. descaling and To Descale or Not To Descale). Most will agree, however, that it's best to prevent the problem in the first place by treating the water.

Along with a well-written owner's manual and a bounty of fittings, gaskets, and whatnot, the Speedster includes a nice tamper and pair of shot glasses: 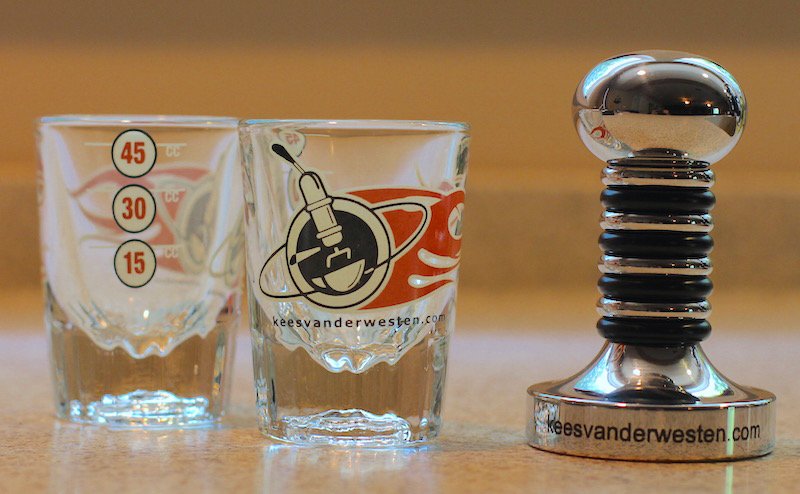 The "shift lever" brew arm for the Speedster is shown below, near the bottom of the photo.

It has three positions: Pump off (up as shown), Line pressure preinfusion (middle) and On (down). When the arm is held to the right of the "shift pattern", the barista can move between these three positions in one fluid motion; if the barista desires to maintain line pressure preinfusion without holding the arm down, the brew arm has a slot that can slide over the midpoint detent. The pump on position is maintained by moving the brew arm further down and to the left where its return is impeded by the midpoint detent.

Although the design of the brew arm could probably be less complicated, it fits nicely with the spirit of the Speedster's hands on, mechanical feel. Its location and the steam wand location do, however, favor those who are right handed. 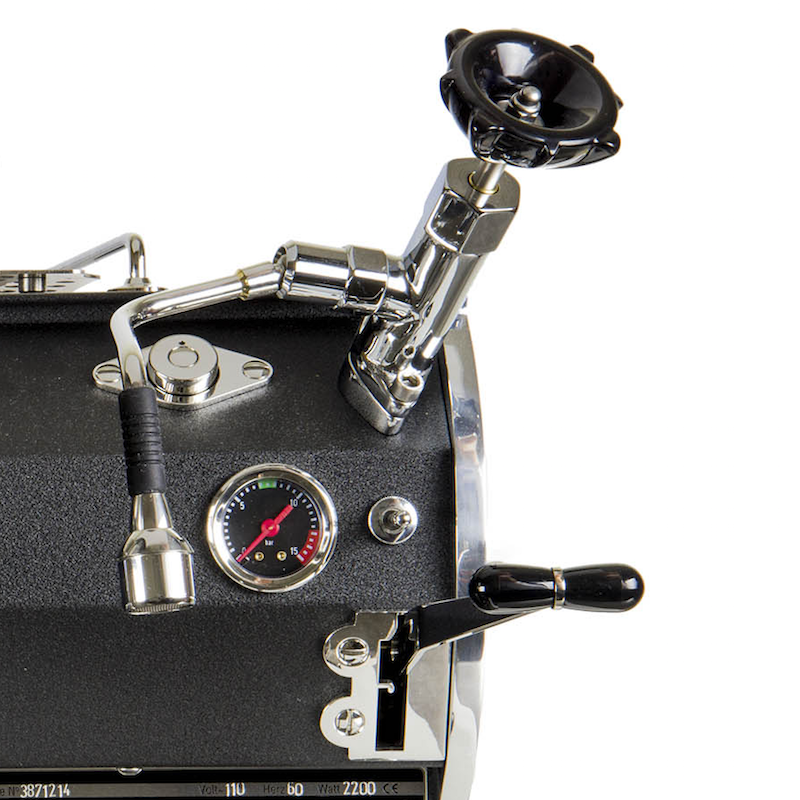 As I mentioned earlier, the large water wand knob is non-functional; the water flow is actually controlled via the momentary switch directly below it. Above and to the left of the brew pressure gauge is the preinfusion valve piston. When the brew pathway pressurizes, a spring-loaded piston is forced outwards, reducing the effective brew pressure, similar to the expansion chamber design of the E61, albeit with the Speedster having more dramatic flair. In addition to the visual reminder of the piston moving outwards, the Speedster's preinfusion chamber emits a distinctive sound of hydraulic pressurization (it reminds me of the sound of an automotive hydraulic lift lowering).

I haven't measured the brew pressure profile of the Speedster, but will do so before wrapping up this review. Presumably the barista can combine the effects of line pressure (midpoint without pump) and the preinfusion chamber to produce a long, gentle pressure ramp. It certainly is effective, as I've found the Speedster is quite forgiving of minor errors in barista technique (the so-called "forgiveness factor").
Dan Kehn
Top

Completing the symmetry of the water valve on the right, the steam valve on the left angles outward like the handlebars of a motorcycle. The long, thin steam arm has several bends towards the driptray. With a quick nudge, the barista can point the tip into the corner of the driptray for purging condensation, though I prefer to spray into a towel to dampen it for wiping the tip clean after steaming milk. The steam wand is a "burn me" type wand, i.e., it has no interior insulation. The rubber insulation sleeve is small and thin, demanding the barista's fingers not linger. 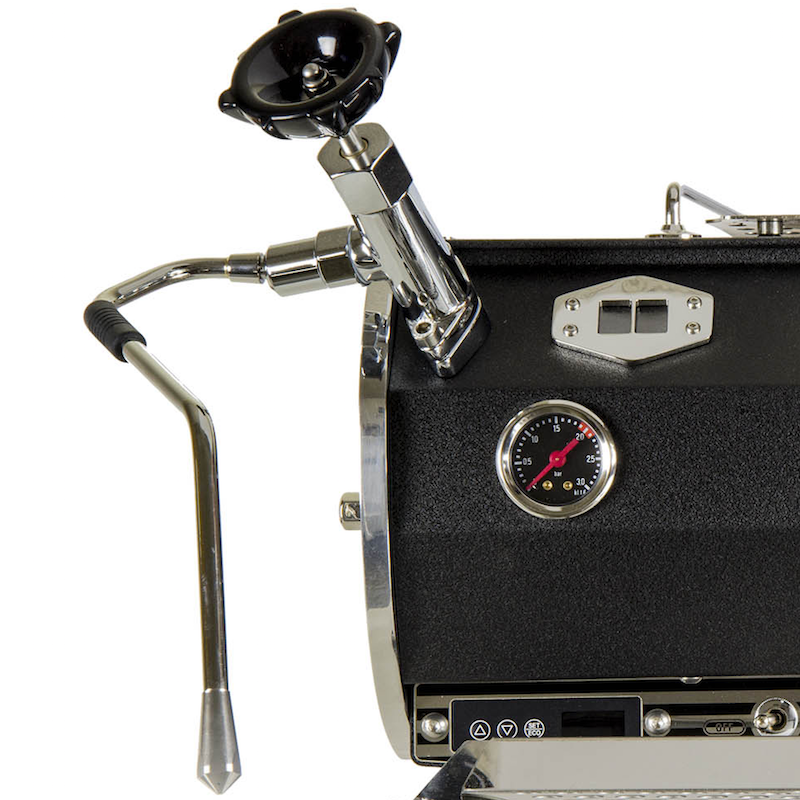 The steam wand pivots on a ball joint in any direction; its length reaches easily to the bottom of any pitcher size. The four-hole tip delivers an even dispersion of dry steam that renders wonderfully creamy microfoam with ease. Thanks to the PID controlled steam boiler, you can readily adjust the steam pressure from a frightful torrent capable of heating paint-bucket sized lattes to a gentle newbie-friendly pace appropriate for a single traditional cappuccino. Perched above the steam valve, the shutoff knob is huge. It closes easily with a soft touch; I haven't checked the parts diagram, but it feels like a compression type closure.
Dan Kehn
Top

I have no firsthand knowledge, but I've guessed that the Speedster's teardrop shape was inspired by a motorcycle gas tank. The photo below shows the profile that led me to this assumption: 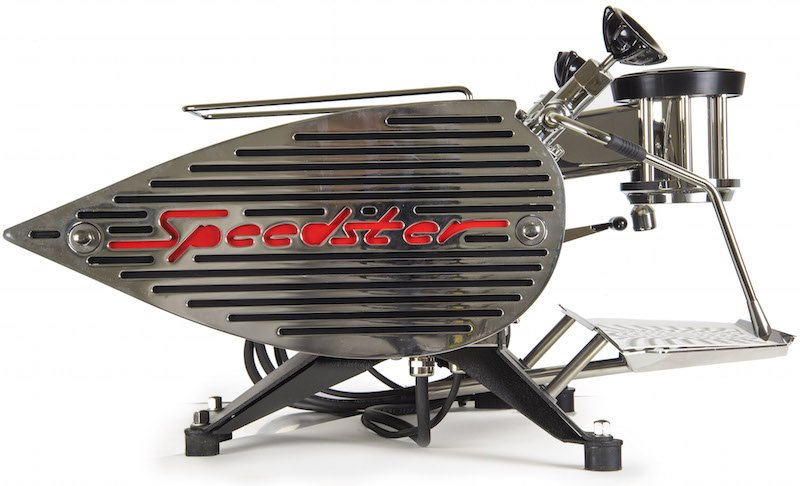 Don't you see the gas tank, headlight, handlebars, shift lever, and foot rests? It's obvious to me. But a fellow HB member contacted me offline and suggested another inspiration:

To be precise, they cited the 1954 Porsche 356 Speedster Cabriolet, but the coupe above was the best public domain photo I found. Even so, I'm sticking with my guess until Kees says otherwise.
Dan Kehn
Top

Mark Prince wrote the Speedster Espresso Machine - First Look in 2009 on CoffeeGeek. Although the review is now 6 years old, it's worth reading. For the TLDR crowd, I've excerpted the conclusion below:


Mark Prince wrote:At the start of this First Look I hinted this may be the best espresso machine in the world. Of course that is a subjective opinion and not rooted in any fact, but here are some real world things about the machine: The Speedster has been installed and operating for five weeks now and has been viewed, used and experienced by at least 30 people, including many professional baristas, restaurant owners, sommeliers, bartenders and cafe owners.

One thing all had in common - to a one they all felt it was the most beautiful and intriguing espresso machine they'd ever seen. At times I had them observe and use both the Speedster and GS/3 Paddle Group and while the more technologically savvy baristas recognized the GS/3's ground breaking design and electronics, the Speedster was the constant first pick.

Usability is first rate. It's obviously a hands on machine allowing a certain amount of latitude in how shots are brewed, but where you want automated control (in temperatures and pressures and stability), the machine has very few equals.

What could be better? At this point, only the addition of a few niceties might improve the machine, but they'd be minor things. I'd like to see a shot timer incorporated into the machine - perhaps, keeping with the retro feel, an analog stopwatch / speedometer kind of dial that engages as soon as the pump does, perhaps even two such devices - one on the left for overall shot time, and one on the right showing just the pump activation time. It would keep with the automobile / racing plane theme of the front and sides of the machine.

Other than that, the machine is just about perfect. For us at least, it is the best espresso machine in the world. Nothing else, save for perhaps other Kees van der Westen machines, come close.

Kees kindly provided a list of the most notable changes since Mark's Speedster and current models:

Part of the review process includes heavy usage. Phillip "the newbie" Marquis works at a local car dealership and helped arrange a serving area at their monthly cars & coffee event. And what better venue for sampling the drinks from a high-end espresso machine like the Speedster than among high-end cars? 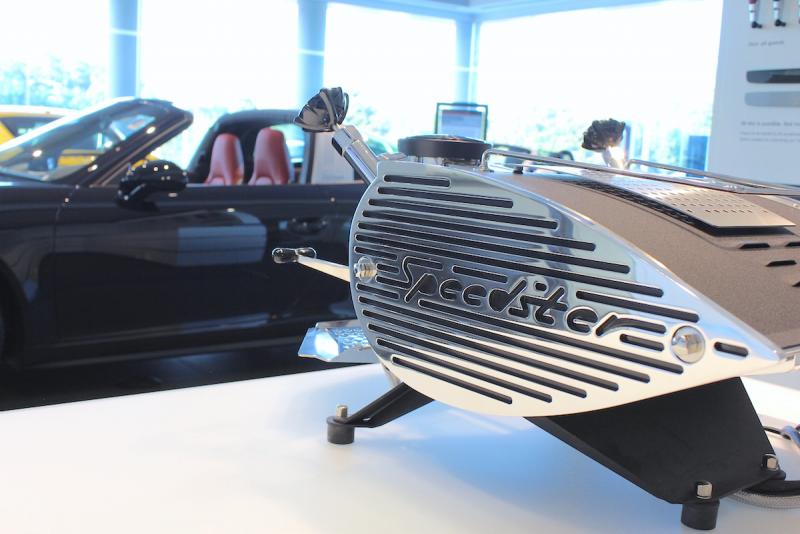 If you're in the area, stop by Leith Porsche in Cary. I'll be there from 9 until 11:30AM with enough Counter Culture Coffee for 60+ people and they're supplying bagels to munch on. From what I hear, they'll have 24 Hours of Le Mans on projection screens.

While I was setting up, I also snapped a photo of this beauty. Maybe they'll let me take it out for a test drive? Yeah, right!

I already asked and they're probably still laughing at the suggestion. 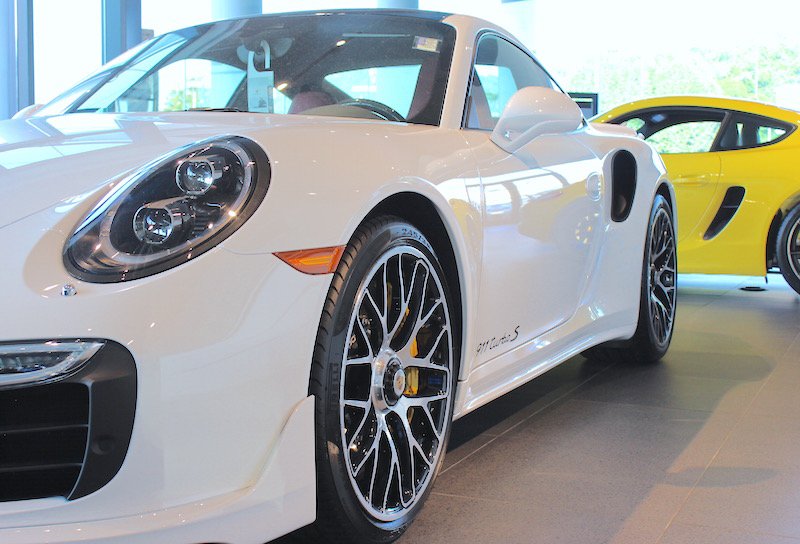 Below are some short videos showing the drink preparation routine at today's cars & coffee event. The first simply shows 3 drinks prepared in 3-1/2 minutes, which is a leisurely pace for the Speedster:
While overall my workflow wasn't bad, reviewing the video, I skipped one key step. Shameful. Oh well, the second video below catches a random conversation between Jeff and I about dry and wet cappuccinos:
Finally, Jeff tries out the Speedster. He got a Profitec Pro 700 a couple months ago and I've given him some lessons. He adapted to the Speedster without problem:
Jeff and I also double teamed during one or two rushes (8+ drinks in the queue); he would prep and pull the shot, I would steam and pour. That cut 15-20 seconds off the usual drink-to-drink time of around 1 minute.
Dan Kehn
Top
← Back •
By accessing this site, you agree to the site's terms of service.