HB member JohnB was curious about the true inspiration for the Speedster's shape, so he dropped Kees an e-mail:


Kees wrote:The shape comes naturally when you place 2 boilers behind each other. Generally I'm fond of fast looking shapes, think of speedboats, planes, cars. Espresso is a fast coffee after all.

Have to admit I never liked Porsches much. Bit of a squashed Beetle.

The next stop on the Speedster's roadtrip is Counter Culture Coffee's training center in Durham: 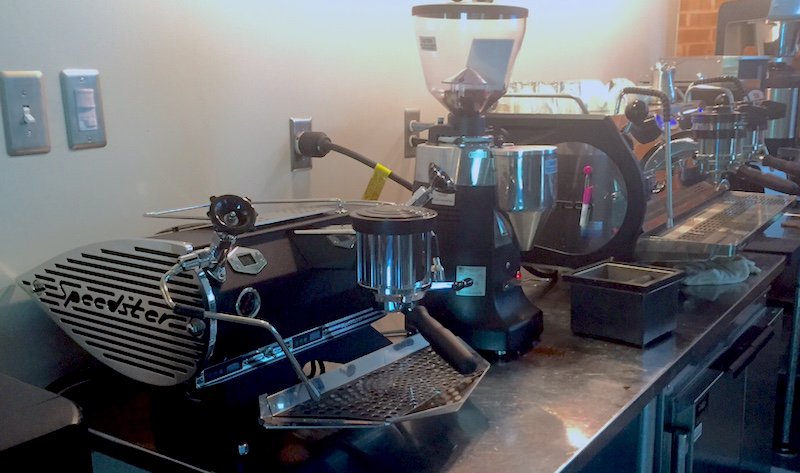 Looks at home next to its big cousin, the La Marzocco EP. We plan a formal side-by-side comparison between the Speester and La Marzocco GS/3 MP on Friday the 26th, but you're welcome to swing by this Friday to check the Speedster out.
Dan Kehn
Top

Friday before last, we held a side-by-side comparison of the Speedster and La Marzocco GS/3. We've held lots of blinded taste tests at Counter Culture Coffee over the years. but seeing that few would dispute these two contenders are amply qualified, we decided to focus on qualities more likely to distinguish the two -- first impressions and ergonomics.

Quick first impressions and ergonomics from the group tryout:
Some commented the steam wand / steam knob of the Speedster wasn't as friendly as the GS/3. I noticed its "burn me" steam wand on the first day and how the wand moved readily, unlike many steam wands that have noticeable resistance. Instead of pointing the steam wand towards the driptray to purge condensation, I learned to purge into a towel without bothering to reposition the wand. That technique saves time and the damp towel comes in handy when it's time to wipe off milk since the really hot wand bakes it quickly.

Below are the participants' written comments:


Jesse Gordon wrote:Overall, I think the Speedster is a well polished machine. All the details are there and the build quality is exceptional. I really like the ability to do a soft pre-infusion and the coffee was tasting great. That said, I'm not crazy about the steam wand and the mechanics of turning the steam on and off.

Ian Stewart wrote:They say you eat with your eyes. Well if coffee was food it would taste pretty darn good coming from a Speedster - man it looks good. The looks are backed up by a nice machine mechanically. Took me a little time to get used to the controls - the shifter on the lower right especially but once I did good espresso floweth. Love the preinfusion position and the extra working space up front. Definitely a sweet machine.

Walt Fulcher wrote:The Speedster is a machine I want to love but for me it doesn't light a fire in my gut. The user interface with the preinfusion and the different gears is too confusing and overly complicated. The way the steam wand moves all over the place, it will burn you up if you're not careful, I just can't get into it.

Kurt Pasquale wrote:Coming from a person that loves the equipment part of coffee making, I think the Speedster is a good looking machine for sure. I thought overall, it performed well. Particularly enjoyed the preinfusion "gear shifting" for 10 seconds. Made a delicious espresso shot. I tend to make a lot of cappuccinos, so steaming is important to me. It performed well and at the speed of my GB5. However. I wasn't a big fan the the steam wand itself. In conclusion, I like the machine and would consider buying it as countertop art, but feel the price is too high. For the same money, I would rather buy a nice used Strada.

Lem Butler wrote:I felt the Speedster wins in the looks department. The GS3 wins in ergonomics. With any machine the user will become used to the features making either machine a winner. If one is more into pre-infusion, the Speedster is definitely the dominant machine but if pre-infusion is not an area a home barista feels comfortable, then the GS3 would be the better choice. I feel the GS3 is a little more approachable for the novice where the Speedster will attract the more seasoned home barista.

Thanks gentlemen for your feedback!

In closing out this part of the review, Lem's comment "With any machine the user will become used to the features making either machine a winner" reminds me of the reviewer's dilemma: How to fairly judge equipment without introducing too much personal bias. I try to look at the design from the designer's viewpoint, which as I noted earlier about the Speedster's steam wand, may require adapting one's technique to better match the equipment's design than vice versa.
Dan Kehn
Top

The last video of the group tryout: Cappuccinos.

All good things must come to an end, and so it is with the Speedster evaluation model, courtesy of Fortuna Enterprises @ coffeeshopsolutions.com. Before ending this review, I would like to point out the thread Latest KvdW Speedster version; it includes more photos, comments from owners, and Devin's temperature report: 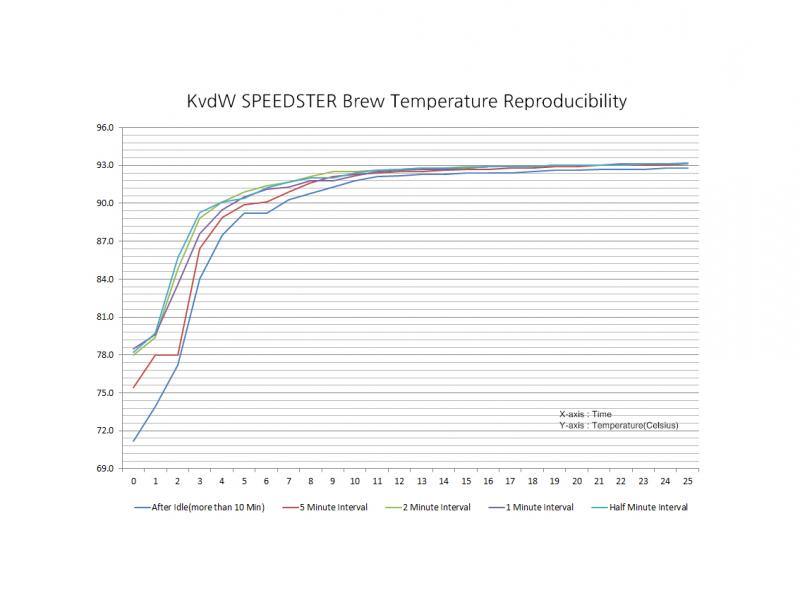 Man would I love to get a shot at trying out both of those beautiful machines! I may have to stop by Durham at counter culture sometime soon!
Top

I no longer have the Speedster, but you can check it out at Fortuna Enterprises in Greensboro. They have a nice showroom; tell Nasi that HB sent you.

UPDATE: Split follow-on discussion to Almost bought a Speedster.
Dan Kehn
Top
← Back •
By accessing this site, you agree to the site's terms of service. If you need help with the site, please contact us.