Coming soon is the first of the Pro's Perspective series of reviews.

As some of you know - I'm a professional barista and Dan has asked me to do a series of reviews of home espresso equipment - from a pro's point of view. This is an interesting challenge for me - I've never actually worked with a home machine before the last couple months when I played around with a La Pavoni Lever machine. So this is all a first for me.

As some background - while I know a lot about the technology of espresso machines, fundamentally I'm all about the taste of the coffee in the cup. And that is the perspective I'll be bringing to my reviews.

As I go along I'm going to post up little reports and teasers before we get to the actual review. And this, well... this is the first such teaser.

Today I drove up to Olympia, WA to the world headquarters of the mighty Espresso Parts NW to pick up the . When I got there I found that Terry had a surprise in store for me. Not only was there a Grimac Mia waiting for me... there was also an Astoria Compact CKXE machine. I think that when it came right down to it, Terry was a little nervous about my going from working on custom Mistral machines to the little Mia and wanted me to have a little more perspective. Regardless of the motivation, I was pretty excited to have a couple nice machines to play with (grin). 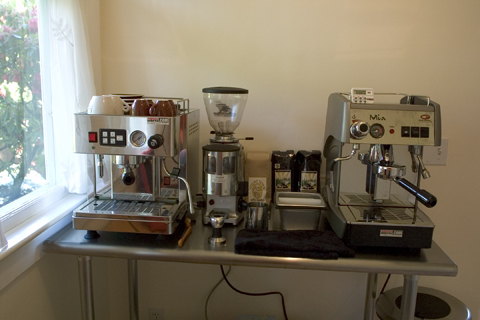 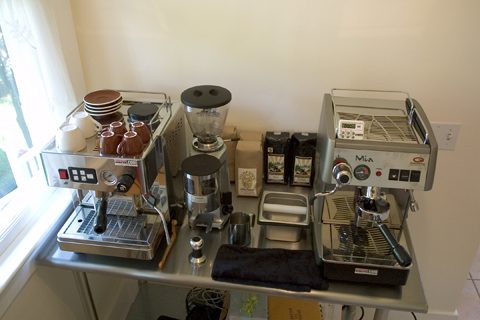 This review is going to focus on the Grimac and will pretty much mention the Astoria as a benchmark of comparison for the Grimac. 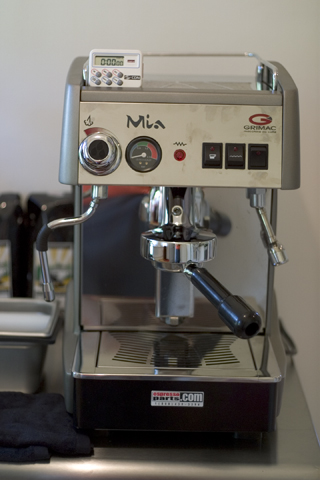 As you can see, the Mia has the classic E61 group. To be honest, in my humble opinion this is no real guarantee of anything but it seems to matter to a lot of people so I thought I'd mention it. You'll also notice that this is a semi-auto machine. Personally, this is of great importance to me. I've really never worked on an auto machine and am not super comfortable with them. In addition, I tend to think that auto machines (because of the flowmeter) are less capable of creating great espresso.

The Mia is a hefty machine. I had the idea that these would be lightweight little "toy" machines... nothing is further from the truth. While the Mia is lighter than the beast that is the Astoria, none the less it was a real challenge for someone with a recently healed broken leg.

Setting it up and getting it ready to pull shots is obvious. Throw a bunch of Crystal Geyser water in the reservoir, turn it on, let it heat up, bleed off some pressure from the steam wand... ready to go.

Took me a couple shots to get the grind right but now it's ready for tomorrow morning's espresso.

1) It's funny what you don't think of needing. I forgot to get some cleanser and had to beg some Puro Caff off a friend.

3) I'm sure I'll get used to it in time... but the whole not plumbed-in thing is already frustrating. Especially the drain tray. I've already spilled water everywhere after not noticing it filling up.

5) Shots seem quite good actually. Tomorrow will be the true test, but I'm actually pretty confident after these first couple shots.

6) The Mia comes with a one hole (that's right one hole) steam wand tip. I've dropped Terry at EPNW an email to see if I can get a real tip. One hole?


I'm actually really excited. This is going to be cool. Plus... I'm looking forward to sitting around home and drinking espresso in the morning.

And I've got a candidate for my sacrificial victim (grin). I'm not only going to play with these machines and review them - I'm going to teach a total beginner how to be a barista on these machines. I will do my best to replicate the secret mountaintop ninja training methods that I followed when first learning about espresso. In the end... her Kung Fu will be the greatest.
"Taste is the only morality." -- John Ruskin
Top

The one hole steam wand conundrum. I think this would be the hardest thing to get used to after steaming with a 8 littler boiler. On the Brewtus, it took me a while to get the hang of it. It does produce excellent micro foam, but it takes a long time. For a beginner, a slow steam wand is easier to control. I'm curious to see if you would need to change your dosing in anyway for the home machine. Do home machines require less/more coffee to produce the result you get with the Mistral.
Abe Carmeli
Top

I'll post a longer update later (day one with the Mia).
But to answer your questions...

Steam Wand - while it is possible to get good milk with this wand and tip, it is none the less dramatically harder than what I'm used to. I'm going to see if the new tip fixes things come Monday.

Dosing - I'm using an OEM ridged La Marzocco double basket in a naked portafilter right now (I'm going to start alternating with a standard portafilter come this next week and I have a triple basket for some coffees). Dosing is identical to what I would go with for a Mistral.

Had a lovely double shot of the Hairbender this morning. Made a nice piccolo latte as well (with slightly sloppy latte art). Then a really nice cappuccino.
"Taste is the only morality." -- John Ruskin
Top

It's funny what annoys you, malachi--that you can't stand the one hole tip on the machine because it makes it take forever to steam, but you don't mind temp surfing at all. I agree though. I think temp surfing on a Silvia was a bit excessive (3 minutes between shots for reverse surfing), HX surfing doesn't seem that bad. And as for milk, you want it to get steamed as fast as possible. I'm hoping I can get my steaming for ~6 oz done in under 30 seconds on La Valentina when she comes, because I have a feeling that I will be dead set on steaming after brewing, and at that point, the faster the better. Do you steam first when you make your lattes on these machines?
Top

I always either steam first or during. My mantra is and always will be "milk can wait for espresso - espresso cannot wait for milk."
"Taste is the only morality." -- John Ruskin
Top

So I woke up this morning ready to go. My first morning with Mia!

Hopped out of bed and ran out and fired the machine up. Then get ready for the day. By the time I got back to the kitchen the machine was up to temp. One quick garbage shot (I backflushed with PuroCaff last night) and ready to get the grind set. First shot... a little bit fast. Second shot...

So here we are. The test. My second shot was perfect looking and the time and volume seemed right... so how did it taste?

This was a very good shot. It was not a great shot, but a very good one. As compared to shots from the Mistral it was lacking in body and mouthfeel. It was a bit thin and didn't have the buttery-ness that the best shots from a Mistral have. In addition, it seems like it was a bit less complex. But it was very balanced and quite tasty. If I was served the shot from a non-Stumptown cafe (with a Linea) I would have been both happy and complimentary.

One thing of interest -- with the naked portafilter you can clearly see the difference between a vibe pump and a rotary pump. With the Mia you see clearly defined "pulses" in the flow that you never get from a rotary.

One side note -- I'm not following the "normal protocol" for temp-surfing as defined by most home users. Instead, I'm doing what most pros do with a HX machine. I'm flushing for about 2 seconds when I pull the portafilter and then I'm flushing for a long 6 count immediately before inserting the portafilter and pulling the shot. The Grimac came from EPNW set to a target of 201F. The Hairbender is best at 200F. The protocol I'm following seems to nail the brew temp for the Hairbender.

Oh... some parameters. I'm dosing right around 20grams in an OEM LM double basket. I'm using the Stockfleths distribution and am pulling right around 1.8oz doubles in 27 seconds. 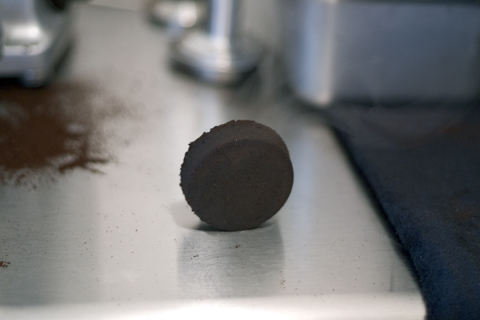 Anyway... after that nice shot I thought I'd build up a piccolo latte for Valerie. First chance with milk.

Disaster. Had to throw the milk away. The wand tip and low pressure conspire against me.

Start again, this time with a different angle on the pitcher and the tip just barely under the surface. Decent milk as a result. Pull the shot. A bit sloppy with the art and... a lovely drink. Absolutely good enough to serve in a cafe. Cool!

And now for a cappuccino. Milk for a good capp is much harder with this wand, but it works and another totally servable drink. 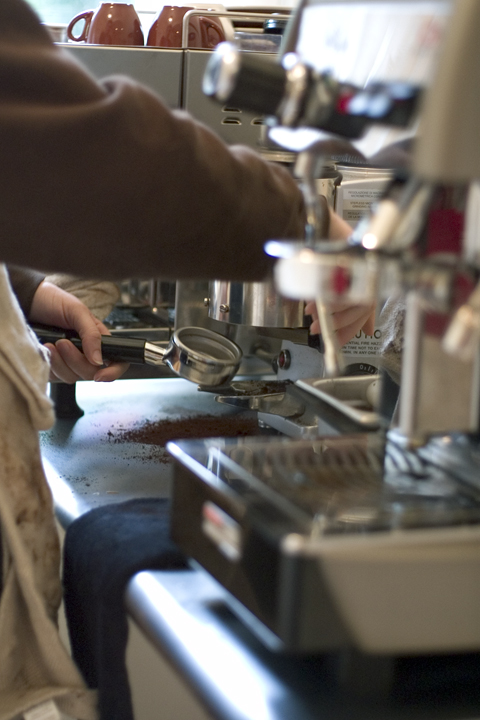 (Ninja-in-training)
"Taste is the only morality." -- John Ruskin
Top

malachi wrote:Oh... some parameters. I'm dosing right around 20grams in an OEM LM double basket. I'm using the Stockfleths distribution and am pulling right around 1.8oz doubles in 27 seconds.

20 grams? You must be hitting the dispersion screen real hard when the puck rises. Is there a different in taste when you dose 17 grams?
Abe Carmeli
Top

When are we going to get you pulling naked triple ristrettos? Dan's joined the dark side already...

I dose a different amount for different coffees and different target flavour profiles. For the Hairbender in an LM double basket I find that 19-20 grams is optimal for the flavour profile I'm looking for and I prefer to go on the high end and tamp harder.

If I dose 17 grams with this particular coffee I find that it loses most of the body and all of the chocolate and becomes very light, high-toned and fruity. The other flavour profile I do like with the Hairbender is from an 18 gram dose and about 1.25oz extraction volume. This gives me a very sweet and bright shot with good concentration, great clarity and a medium body.

I find that the Hairbender doesn't respond well to triple baskets. I have a triple basket for the review as I'll use it (for example) with the Black Cat.
"Taste is the only morality." -- John Ruskin
Top

So Chris, if I may rephrase your technique here, you adjust the Tamp pressure to the dosage. If you want to cram 20 grams in a double basket you grind it coarse and tamp ~50lb?
Abe Carmeli
Top
← Back •
By accessing this site, you agree to the site's terms of service. If you need help with the site, please contact us.