another_jim wrote:I like grinding into the Niche cup somewhat better than grinding directly into a funnel/basket set up on the Monoliths. However, compared to the awful timed grind funnels or elephant trunks on many commercial grinders, they are both great. I'm guessing this may be a matter of individual taste.

ds's, your report on static seems highly unusual, judging by the reports from early adopters. I'll keep an eye out.

As I said, I load my baskets detached from the PF, and for this the Niche set up works particularly well -- using the cup and basket as a cocktail shaker is a faster way to declump the grind than either a doser thwacking or WDT. The other reviewers will have different work flows, and will have different ergonomic preferences.

My experience with the NZ and static matches those of ds. I too have resorted to RDT. But I grind directly into my PF using my custom made PF stand and funnel. Designed specifically to be used with the NZ.
Top

I have also had the Niche Zero since January and have used it every weekday for 2-3 shots a day. I only had a Kinu M47 prior which I used for 5 months and got used to the single-dosing workflow. NZ is undoubtedly zero retention and well-built. Shots are consistent and I've had 8 different single-origins (Colombia, 2x El Salvador, 3x Ethiopia, Uganda, Costa Rica) and a Guatemala+Ethiopia espresso blend, and all pulled great and consistently. Only Colombia, Costa Rica and Uganda tasted great, whereas others were average-tasting and not due to the grinder.

Jim, it would be great to see comparisons between sub-$1k grinders (e.g. Sette 270, Atom) and larger/titan grinders (Monolith, EK43, K30). Many buyers unsure of how the NZ fares against other home grinders.
Top

Tim.R wrote:Thanks for the effort of putting the Niche through its paces Jim, looking forward to reading Sam's take on it later on. I'm actually really curious about the extraction numbers. Can you guys give us an overview of these numbers later on?

I'm expecting my Niche to come later this month so I'm well into the anticipation phase. I'm looking for it to replace my Mythos so reading that it matches up well to the big boys is reassuring to say the least. Cheers!

Once I get mine I'll post some numbers as I have a refractometer... but something I'll say about refractometry is: It will tell you how much 'stuff' is in your cup, but not whether or not that stuff is 'good'.
Top

vizia wrote:Jim, it would be great to see comparisons between sub-$1k grinders (e.g. Sette 270, Atom) and larger/titan grinders (Monolith, EK43, K30). Many buyers unsure of how the NZ fares against other home grinders.

Over the next few months, the grinder will make the rounds with the HB reviewers who want to give it a spin. That will give people more comparison data.

Personally I can say this: The Sette is a fun and forgiving entry level grinder, but it isn't close to the Niche. I can't comment on the Atom or K30 in terms of head to head grind quality; but your first decision branch should be whether or not you single dose. Conventional flat burr espresso grinders like the K30 and Atom are a complete nightmare for single dosing, since flat burrs don't suck beans in like conical ones. It either takes augurs, like bulk grinders or the DRM conical intake section, or a radically different burr design, like the Vario ceramic burr with its huge intake section, or some clever design work, like with the Mono Flat, or the new plunger model from Ceado, to make flat burr single dosing work smoothly.
Jim Schulman
Top

Thanks the the reviews. I'm looking forward to my niche replacing my vario if for nothing else, the ability to go back and forth between adjustments and not needing to wait 2-3 shots before adjustments "take".

Side note: have you tested niche for non espresso brew methods? I know a number of people have asked in the niche thread but the opinion of a respected taster like yourself would be great!
Top

I've been moving back and forth between setting 12, a fine espresso setting, and 25, a pour over setting. But I've used the 25 on the Bianca for making demitasse coffee (1:6 to 1:7 brew ratios), which has become my addiction of the month. The back and forth has been impressively repeatable so far.

I'll do a battery of side by side blind tests of the Niche at brew settings and the Vario with its brew burr (yeah, it's a please do not touch the levers thing). Based on the Kony burr being designed for espresso, I'm guessing this will be a lot tougher for the Niche than matching up to commercial conicals for espresso, and I expect the Vario to come out on top. Right now, I'm guessing if you want a grinder that can shine from top to bottom of the grind range, you're looking for something like the Monolith Flat. But I'm always willing to be surprised ... that's the real reason I love blind taste testing, despite the frequent humiliations -- being totally surprised makes up for all the pies in the face.
Jim Schulman
Top

Looking forward to it. I do plan o keep my vario and put brew burrs on it, just not sure if I'll keep it at home or bring it to work yet.
Top

Tim.R wrote: I'm actually really curious about the extraction numbers. Can you guys give us an overview of these numbers later on?

Tim, the extraction yield I measured ranged from 19.5 % to 20.5% mostly (assuming no gusher/choker or major channeling), depending on the coffee. But that was very similar to the Monolith Conical. Plus, I have measured the Monolith in more than one occasion over the period of months/year with different coffees and it usually falls within the range. Also, considering these were non-filtered measurements, they would probably fall back to 18-19 ish % extraction after filtration (when compared to a filtered VST reading).

I have also posted a separate topic (I originally wrote that for here), where I tried to explain why I wouldn't put too much weight in EY% numbers when evaluating a coffee grinder. The EY% to me is just a check box to say that it's not underextracting the coffee, but it has limited utility beyond that.

Why TDS/extraction yield measurements are not a good way to evaluate taste profile/quality?

jchung wrote:My experience with the NZ and static matches those of ds.

Just to double check, are you saying that you get a lot of static too when grinding into the stainless cup? I notice it can be messy when attempting to grind into a portafilter (which I mentioned in the review). But when grinding into the stainless cup, I haven't noticed any issue/mess arising from static. In fact, I did want to comment how clean the grind cup is after the grind transfer (with a tap on the bottom of the cup).
Top

samuellaw178 wrote:Just to double check, are you saying that you get a lot of static too when grinding into the stainless cup? I notice it can be messy when attempting to grind into a portafilter (which I mentioned in the review). But when grinding into the stainless cup, I haven't noticed any issue/mess arising from static. In fact, I did want to comment how clean the grind cup is after the grind transfer (with a tap on the bottom of the cup).

Yes. I get lots of static when grinding into the stainless cup. 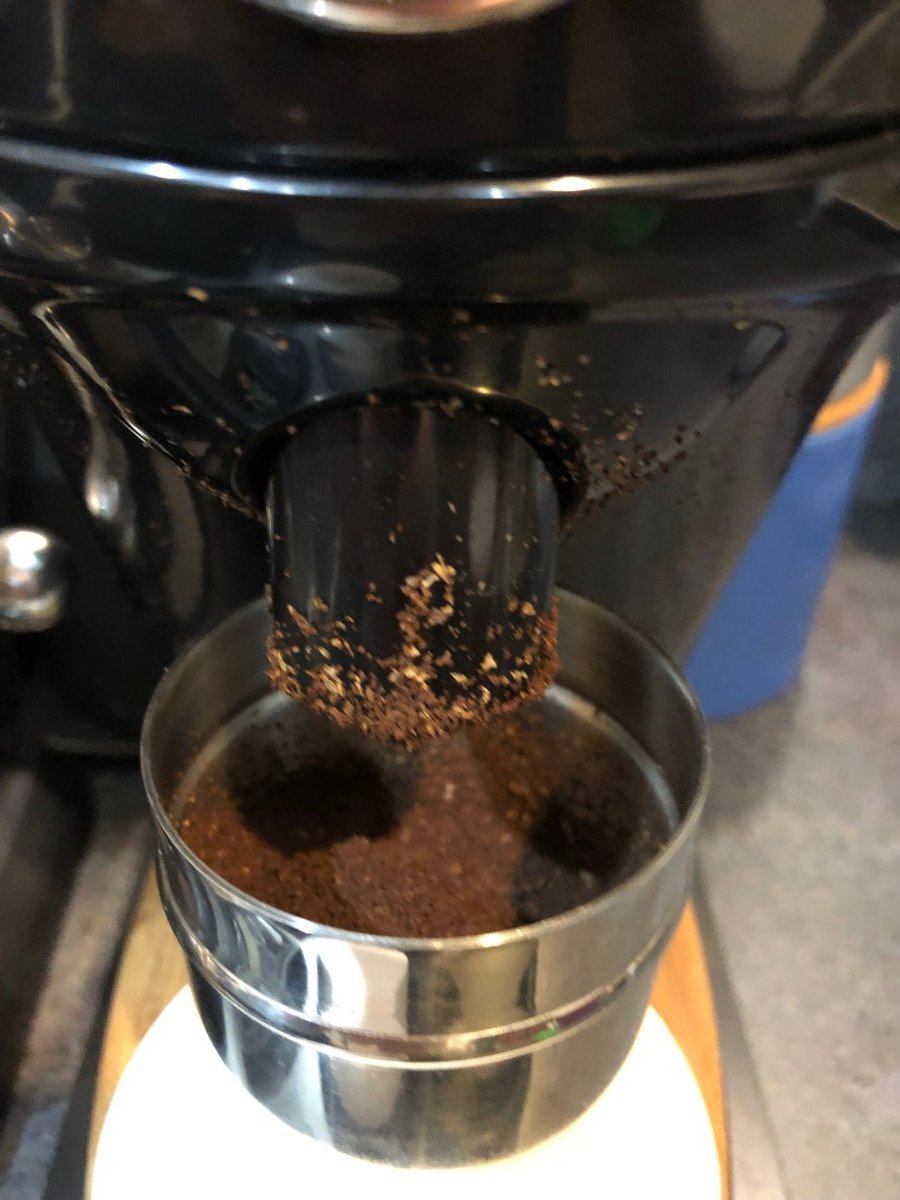 The photo looks like chaff on the grinder, not static in the cup. Home roast?
Jim Schulman
Top
← Back •
By accessing this site, you agree to the site's terms of service. If you need help with the site, please contact us.