Today I decided to work on some single shots from the Domobar Super. Single shots tend to be more challenging especially for US users. The trick is dosing, most people have become accustom to overdosing. They simply thwack the doser while grinding until they have a small mound above the rim of the basket. Then sweep the grinds level with the basket and tamp. With a single basket you simply cannot do that. Singles take more finesse and an eye for detail.

The end goal is a one ounce drink produced around 28 seconds. The diminished dose of a single requires a finer grind so an adjustment on the grinder is needed, but before you can adjust the grind you must find a starting dose. One of the critical points is to get the proper headspace (the air space between the top of the puck and shower screen). If you overdose a single you may not be able to lock the portafilter into the group or the surface of the puck will scrape against the shower screen. That will crack and disturb the puck that you spent so much time preparing.

One trick that can be used to gauge your dose starting point is to use a nickel as a gauge. Dose into your basket and tamp, then place a nickel on the surface of the puck and lock your portafilter into the group. Then remove the portafilter and look at the puck. If the nickel is pushed deeply into the pucks surface, or there is any cracking of the puck, your dose is too high.

To demonstrate this, and assist myself in finding a starting point for the single dose on the VBM, I decided to use this method. I started off with a 10 gram dose in the stock single basket. I distributed my dose by tapping my finger against the side of the basket. I also tap my basket down against my tamping stand to further level and settle the dose. Tamp, put my nickel in the center of the puck, lock it in and remove. 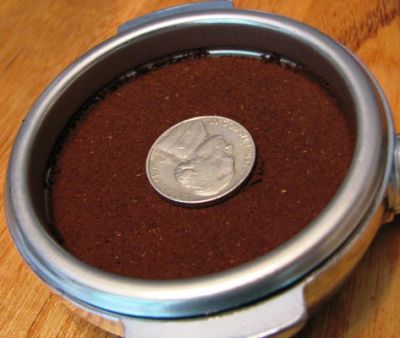 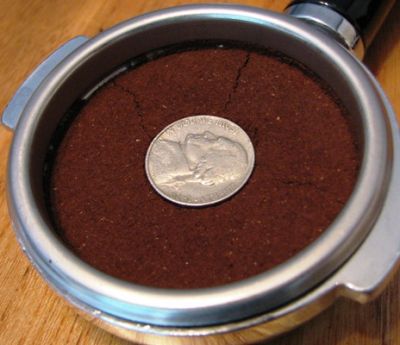 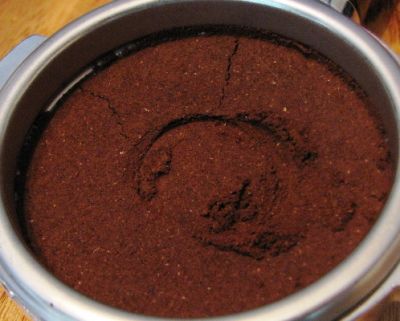 As you can see, the dose is too large. The shower screen did not contact the puck but the nickel was press deeply into the pucks surface causing radial cracks in its surface.

Using the results from the 10 gram test, I dosed down to 9 grams for the second try. Once again I prepared my dose and placed the nickel in the center of the pucks surface and locked in the portafilter. This time the nickel was slightly indented in the surface of the puck. I decided to use 9 grams as my starting point. 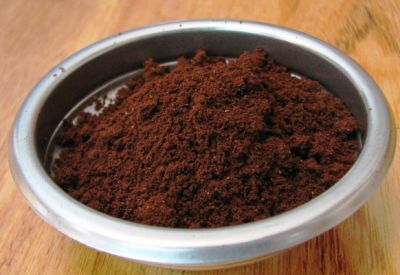 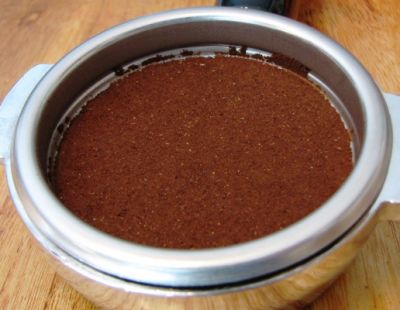 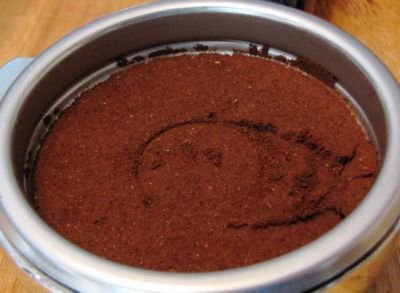 I continued to down dose without the nickel to see how low I could go. I continued to reduce the dose by .5 gram increments until my tamper was bottoming out against the concave sides of the single basket. At 8 grams my tamper was bottoming out against the sides of the basket. I was still getting a leveled tamp but it was not getting fully compacted by the tamp. You will feel when the tamper is hitting the basket instead of being stopped by the puck.

I decided on a 9 gram dose for the Ambrosia blend I was using. An 8.5 gram dose would also work but I was very, very close to bottoming out the tamper. You could also do like the Italians and grind extra fine and use a very light tamp just to level the puck.

I find the single shots from the Domobar Super to be comparable with other E61 vibratory pump machines. The singles tasted a little sweeter and brighter than the doubles with a creamier mouthfeel. A good shot and well worth the work.

Sorry for getting back to you guys late, crazy week at work on an American Pie movie!


cannonfodder wrote:Another thought, you are in Canada; I wonder if this is a US market mod and not present in the Canadian version. Although on my Isomac, which does not have a restrictor, the group temperature climbs higher than what you are seeing.

My machine came from 1st line, so I assume it has the restrictor installed. My machine continues to idle around 206-208 after a few hours warm up. It spikes around 213 on the flush and it seems to idle for a long time after a shot at around 200 slowly climbing up to 206 again after an hour or so. The shots are really great, so that is all that matters. I finally feel like it's dialed in really well.

The old pressure gage was completely faulty. As soon as I installed the new one, there was a marked difference in the reading.

On another note, I did a little mod to the cup warmer tray. I was concerned that the edge of it was starting to scratch the black paint on the outer cover. A few modified cable clips screwed into the same spots as the bolts for the two handles: 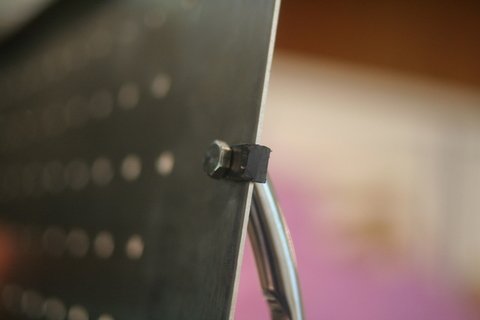 Black electrical tape, works wonders. I put a strip down each side and across the front and back. It dampens almost all the vibration and prevents the scratching.
Dave Stephens
Top

I have ordered a Scace II so I can do some temperature tests. In the meantime, I am pressing on with Erics adapter. I have his 'super deeelux' model, all stainless with the steel braided, strain relief thermocouple so it is as about as good as a Scace anyway.

I wanted to get some temperature vs. time measurements with a fixed rebound time. I plugged up a portafilter basket (got to love duct tape) so I could get a two ounce flow in 37 seconds, the time was a little long but rock solid consistent.

I decided on a flush-less inter-shot test with a two minute rebound between each shot. I went with two minutes because that is a reasonable time for a home barista to knock out a spent puck and prepare the next shot. As I said, I did away with flushing between shots and simply pulled a 2oz sample. I let the machine idol for an hour and a half to make sure everything was at operating temperature.

I started by flushing the machine down to 205.8 followed by a two minute rebound, then the logging started.

Each shot ran 39 seconds, a second to start the stopwatch and datalog on the Fluke then flip the lever up, one second between flip the lever down and hit datalog and stopwatch stop. I ran five back to back tests. I could almost key in the data once and then copy past it into another column for the graph. The temperatures were within a few tenths of a degree every time 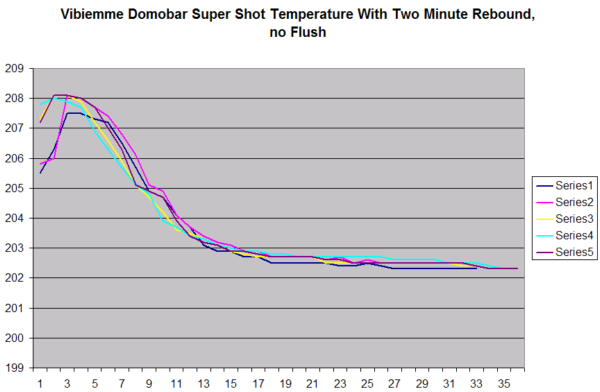 For those of you that are terminally control obsessed, or just have a little difficulty reading the graph, here is the raw data. I wish had a Scace to verify the results against. The intra shot abilities of the VBM are quite impressive. Keep in mind this is a stock system, no insulation, no PID, no smoke and mirrors, just good solid design.

FYI, I was using the stock single spout portafilter with the boiler set at 1.1 bar at the top of the cycle.
Dave Stephens
Top

I received the replacement OPV spring from 1st-Line yesterday, so as soon as I finished this morning's pulls I went to work. I removed the outer case and decided to try to re-angle the OPV valve so I removed the inner divider panel as well. Loosening the fittings on each end of the valve allowed me to turn it to a better angle. It certainly would have been a lot better to have placed the reservoir microswitch off to one side so that the OPV could have been more accessible. I suppose it is a minor inconvenience since the adjustment rarely needs changing.

I found that by standing the machine on its face by tipping it forward onto the E-61 that no water leaks out of the valve when removing the spring. Placing a folded towel onto the counter top protects both the machine and the counter. 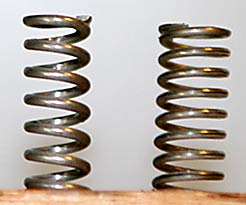 The new spring, on the left, is much heavier than the original that I removed. The difference can be seen here, and compressing them between index finger and thumb reveals a great difference in compression force as well, with the new one being far stiffer.

Replacement is a simple matter of unscrewing and removing the adjustment screw, removing the old spring with a small tweezer, and replacing it with the new spring. Screw in the adjuster and Vito's your barista (Bob's your uncle?).

Once I had it all back together I inserted the blind filter and readjusted the OPV. I found that the new spring made it MUCH easier to adjust. The original was very touchy and the smallest adjustment made a large difference. The new spring was very linear in its adjustment and finding the desired setting was a very easy matter. before closing it up I turned the pump on and off a few times and every time the pressure gauge hit the exact pressure I had set.

I suspected the original right from the start. At one point the machine hit around 14 BAR and blew off a hose inside. I adjusted the OPV down to about 10 BAR, but still it would hit 12+ at times. If you think that you have an OPV problem and suffer from erratic brew pressure, take a look at your spring and compare it to the photo above. I highly recommend replacing the old, thinner spring with the 'newer' heavier one. Contact Jim at 1st-Line for availability.
Espresso! My Espresso! - http://www.EspressoMyEspresso.com
LMWDP #644
Top

How often do you do NINE consecutive shots?

the first 3 or 4 shot temps are ALL OVER the place -- trending down from way too hot to just too hot.

edna713 wrote:the first 3 or 4 shot temps are ALL OVER the place -- trending down from way too hot to just too hot.

To be clear, Dave did no flush, i.e., it is intentionally not a normal home scenario:

Obviously in actual brewing, the extraction would not begin until after the "way too hot" phase. Each HX machine is a little bit different, but in general, the temperature is around 206F when the flash boiling stops and then you continue flushing to the target temperature. For example, my HX espresso machine brew temperature drops one degree per second, so a target brew temperature of 201F is flush to flash boiling stops + five "Mississippis." According to Dave's plot, that looks like the 12-15 second mark for the VBM, but again, the flush regime varies slightly from machine-to-machine and the Espresso Performance section of the Buyer's Guide will cover it in detail.

What's interesting about Dave's plot is not the temperatures during the initial (flush) phase, but the consistency of the latter brew temperatures. For example, here's one line from his data: Consistency like this means mastering the flush regime should be a breeze.
Dan Kehn
Top

I see what you mean Dan, it is just that "flushing" should not be a learning requirement.

You're right, that's one of the tradeoffs of HX machines, but it's easy to figure out. For the precision-minded home barista, Eric's thermocouple adapter reduces it to a trivial exercise and allows easily repeatable on the fly temperature changes to boot. Although managing brew temperature causes some newbies angst, it's very low on the difficulty scale. Learning to diagnose taste flaws, for example, is much more challenging.
Dan Kehn
Top
← Back •
By accessing this site, you agree to the site's terms of service. If you need help with the site, please contact us.