While not yet offered in the US, lever espresso machine fans may have already read about the Bezzera Strega: 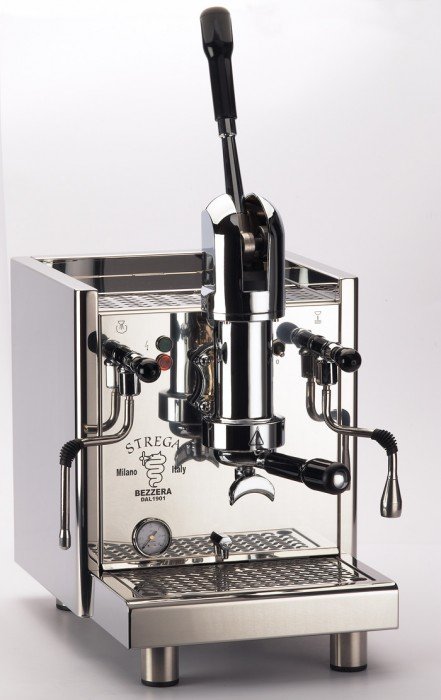 From Bezzera Strega - new spring lever for home use

Although it looks like a conventional single group lever machine, it's anything but. The Strega is a pour over, not a direct connect. But instead of a 3 bar boiler fill assist pump (like the pourover Pavoni Pub EL), this has an Ulka pump set at 11 bar blind pressure. The pump is activated by a microswitch that engages when the lever is at the cocked detente. When engaged, it offers water through the HX into the lever's cylinder. The pump noise quietens when the cylinder is filled and goes virtually silent when its pressurized. Lifting the lever off the detente kills the pump and starts the spring action.

It is possible to do all lever shots, by cutting to lever the moment the pump quietens. It is also possible to let the pump do the first part of the shot, or all of it, and cut to lever later into the shot. For this "Second Look", Jim Schulman looks at the Strega from every angle and usage; I'll ride shotgun, offering color commentary.

UPDATE: Before you start on the thread; Read the Front Page Review and Abbreviated Shot Making Instructions under the heading "UPDATE".
Dan Kehn
Top

(Hint: the videos play best in full screen; total length is about 25 minutes)

INTRODUCTORY: Bezzera has designed the Strega to be as simple to use and convenient as any semi-commercial pump machine. This includes the innovative use of an HX and group head heater to stabilize the lever temperature, and standard Ulka pump to refill the boiler and prime the lever from a standard pourover tank.


WHO SHOULD BUY IT: Despite the design tweaks to make it a semi-commercial machine, the Strega lever still requires muscular effort, it is not counter friendly, and it is slower for continuous shots than a pump machine. However the combination of a lever and nine bar pump gives a wide range of pressure profiling capabilities. This permits making brilliant espresso from coffees, including the Esmeralda Geisha, that cannot be used on pump machines.


PRESSURE PROFILING ON THE STREGA: The attraction of a lever machine is that it can be played like an instrument. The Strega's combination of lever and pump multiply these possibilities. On the Strega, the pressure of the preinfusion, the early, middle and late part of the shot can be separately controlled. This allows the Strega to emulate the operation and taste of a wide variety of high end espresso machines.
I would like to highlight that this lever/pump combo requires either an unusually fine grind or a high dose. It is better to keep the grind in the normal espresso range and add about 2 to 3 grams to the dose of normal double baskets. This will get the shots I describe in the videos. Using very fine grinds will usually get overly flat and sweet comfort food shots.

The following is a short step by step instruction for making shots that was initially a part of the draft front page review. Due to the shortened format, and since this information is available scattered throughout the thread, it was cut. Here it is, for reference:


If you want the master class shot with the flavor clarity of classic levers, but the denser body and crema of pump machines; here is the drill: I've tried many other variations, including running the pump for longer into the shot, or cutting the pump early in the preinfusion, then waiting, then turning it back on (to copy the line pressure preinfusion of pump machines). These experiments produced only mediocre shots for me. As far as I can tell, the machine is at its best and most characteristic when the pump is used for preinfusion portion of the shot, and the lever is used for its flow portion.

A note on draining and filling the boiler by siphoning when descaling. The holes for the the vacuum breaker and pressure gauge fitting are too narrow for most hoses. The safety valve requires a large amount of torque. So the best fitting to use is the steam valve's, which requires only gentle torque to open and close, and has a large enough hole to accommodate the standard espresso machine hoses.

The boiler fill control allows a fill of approximately 0.75 liters; the entire boiler is full to the upper fittings at 1.375 liters.

As far as I can tell, there are no nooks or crevices that preferentially scale; so descaling intervals can be fairly long. You may want to rinse-descale just the HX more frequently, and the boiler less frequently, unless you do a lot of steaming or use the hot water tap regularly.
Jim Schulman
Top

Here is some temperature and pressure info:

Shot per one Minute; no Flush:

Shot per two minutes; no flush:

At a realistic 2 minute interval, no flush shot starts at around 97C and ends at around 94C. The group head heater and tiny HX make even this huge lever a near "dragon," so the two minute shot interval shows a compete recovery. Since this is about the maximum speed for making shots, the group needs to be flushed even when making back to back shots. The flushes can be kept very short, just a few seconds of actual flow (sometimes you get no flow for the first few seconds). Longer flushes get down to a fairly stable 90C, the group head temperature. This is a good idea for very light roasts.

The machine is about as temperature stable as the Elektra or BZ07, but getting to anything more precise than hot or cold while arm wrestling a lever (as opposed to pushing a nice civilized pump switch) will be tough. However, the set up makes it almost impossible to actually overheat or overcool the machine. It will always be in the ballpark.


Here is a video showing a leaky PF pressure gauge and the lever upswing to give an idea of the pressure ranges. It isn't pretty, but it is clear. The pump will get up to 10 bar or so with a regular puck. The lever shows the same pressure here as blind, running 10 bar fully primed to 5 bar at the end of the stroke.

These are the maximum pressures. As the demo videos show; the idea is to retard the spring to control the flow.
Jim Schulman
Top

This bench review is sponsored by 1st Line Equipment. There is no information as yet on price and availability.

The thread is open for public comment. Please stay on topic; irrelevant posts will be deleted to allow readers easier access to the information.

In particular, while we at HB are excited about the potential of the machine, we aren't sure about who would be interested in buying it, and for what reasons. For instance, in the current Strega thread, lever people liked the idea of a pourover lever, but were negative on a full pressure pump; mainly for aesthetic reasons. However, for my taste, it adds a great deal to the experience.

So is the machine a kluge or a stroke of genius? Can it convert lever heads? Appeal to pump people? Bezzera has certainly been unconventional here; and for that alone, they deserve some well considered comments.
Jim Schulman
Top

I really like the videos. However, with respect to the effort required, I wonder if you've read Doug's piece about height here
Lever Espresso Machine Ergonomics and the Evolution of the Coffee Bar
As can be seen in this picture, a very small old lady has no effort running a lever machine equipped coffeebar, but the lever is way up high. 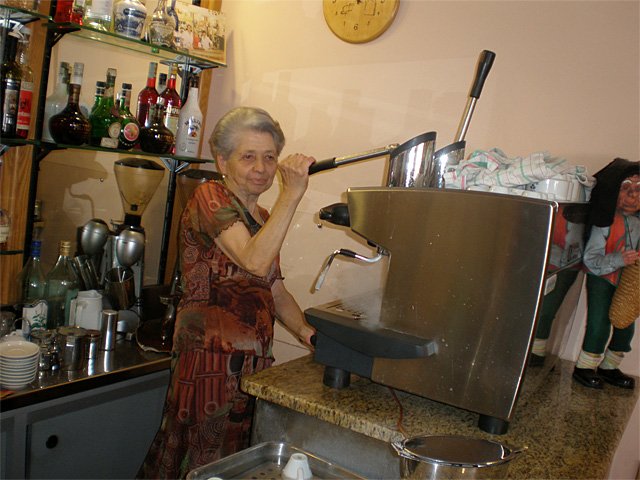 (Via http://keesvanderwesten.com/news_sorrento.html)
LMWDP #232
"Though I Fly Through the Valley of Death I Shall Fear No Evil For I am at 80,000 Feet and Climbing."
Top

Also, the lever with the little lady seems to be longer, better mechanical advantage.

I tried the lever on the Strega while visiting Jim, and found it difficult to operate. I'm nearly 70 and have some tendonitis in my wrists. The lever did get away from me.

I myself am a pump person but had i not already blown my espresso budget i would certainly consider this machine. There is something magical about a lever machine, and being able to play with pressure seems appealing.

I did notice however a significant amount of flex where the brew head attaches to the rest of the machine as Jim was operating the lever. I wonder if this may eventually cause problems where the pipes connect in the back of the head.

I might have liked a reinforced bracket to rigidify this area. Maybe it's just the engineer talking...
Damn this forum, I've had too m..muh...mah..mmmm..much caffeine!
Top

It would be nice if they all shipped with such a good portafilter fit. The portafilters on the Strega I'm using right now require a lot of force to lock in safely, and the fit is not really very satisfactory.

I was just pulling a shot and thought I'd tightened it enough, but apparently not. Half way through, the portafilter unscrewed itself, shot down, smashed the cup, destroyed my digital scale, sprayed hot coffee all over the machine and me, and rebounded across the room.

Based on videos and photos, most Stregas ship with a similar tight portafilter fit, and yours is the only one I've seen that locks in anywhere close to 90 degrees. I am sure everyone is familiar with the similar but more major problem I had with my other Bezzera machine, which was never solved by the vendor.
Chris
Top

ilVecchio wrote:Also, the lever with the little lady seems to be longer, better mechanical advantage.

I tried the lever on the Strega while visiting Jim, and found it difficult to operate. I'm nearly 70 and have some tendonitis in my wrists. The lever did get away from me.

Joel, I'll bet it wouldn't be hard extending the lever arm for someone who really wants that machine.

Roeland, it had occurred to me too that a lever machine can be elevated for better ergonomics.
Gary
LMWDP#308

Bob_McBob wrote:It would be nice if they all shipped with such a good portafilter fit. The portafilters on the Strega I'm using right now require a lot of force to lock in safely, and the fit is not really very satisfactory.

I was just pulling a shot and thought I'd tightened it enough, but apparently not. Half way through, the portafilter unscrewed itself, shot down, smashed the cup, destroyed my digital scale, sprayed hot coffee all over the machine and me, and rebounded across the room.

Based on videos and photos, most Stregas ship with a similar tight portafilter fit, and yours is the only one I've seen that locks in anywhere close to 90 degrees. I am sure everyone is familiar with the similar but more major problem I had with my other Bezzera machine, which was never solved by the vendor.

After 4 month's of use mine fits pretty snug actually.