What does a blueish residue in espresso machine boiler indicate?

My Rancilio Silvia V2 recently started tripping my GFCI outlet, turns out I have a faulty heater (seeing about 3Mohms between terminals and boiler body).

Tonight I took the boiler out and noticed blue residue. Just curious if that is normal or what would cause it (I found one thread that suggests overheating).

I won't argue with your assessment of the cause of the problem, but 3 meg and even 240 V is only about 80 uA, less that a tenth of a mA.
Top

Top 9 Causes Of Copper Corrosion Problems If you use water softener, you may want to turn it off the first month you use this machine to let calcium/magnesium "prime" the copper surfaces to protect it better. Your electrical problem could be a contributing factor too. 3Mohms may vary under different conditions.
Top

Have you descaled it lately? The citric acid will turn the water blue when in contact with minerals etc

Randy
“There is nobody you can’t learn to like once you’ve heard their story.”
Top

Jeff wrote:I won't argue with your assessment of the cause of the problem, but 3 meg and even 240 V is only about 80 uA, less that a tenth of a mA.

That is a very good point (Plus I am on 120V). The meter reading fluctuates quite a bit. Most consistently I get 3M, but I've seen it as low as 250K.
FWIW, the heather would run for a few minutes before tripping. I am measuring the resistance with the boiler cold and out of the machine.


slipchuck wrote:Have you descaled it lately? The citric acid will turn the water blue when in contact with minerals etc
Randy

It's been sitting idle for over a year -- I *think* I had descaled it pretty recently before letting it sit.

Forgot to attach a photo in the original post. 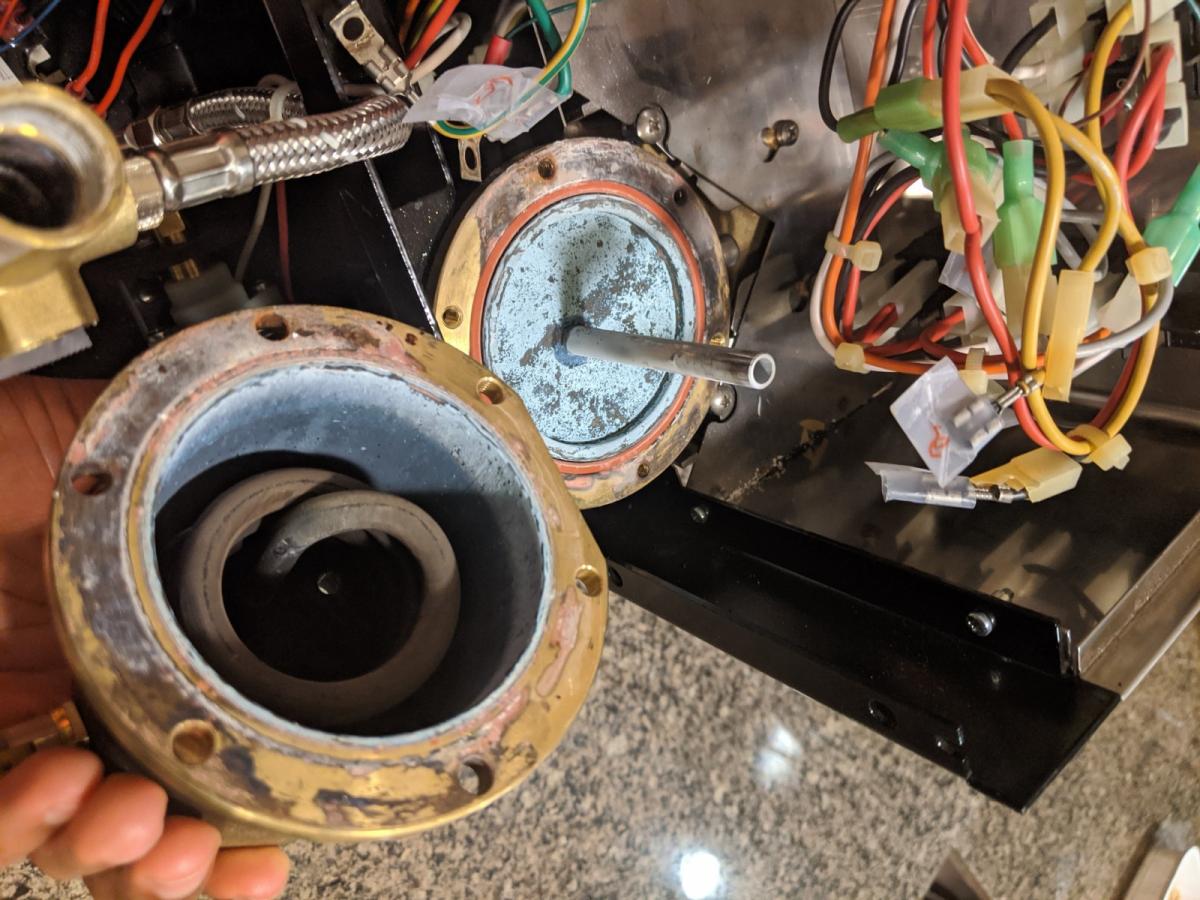 Jeff's calculation is spot on, and even at 250 kiloOhm and 120V you would be looking at less than a milliAmp of current leakage to ground. But unless you used an insulation tester (aka megger) I would not put too much faith in that resistance reading.

The blue is certainly some form of copper salt, which indicates some corrosion of copper or copper alloy (like brass). This could be due to harsh and unnecessary descaling. Also may be due to chloride ion, especially when combined with low alkalinity water. It's interesting that whatever it is has deposited on the brass boiler walls and not on the copper element. I think the solution is to avoid descaling when not needed and avoid harsh strong acids if/when you do descale (use a descaling product per instructions) and rinse very well.

You should be OK in Seattle with respect to chloride ion. If you're using a standard Brita jug charcoal filter you might want to consider switching to the new Longlast filter. Unlike the standard filter, the Longlast should not reduce your water's alkalinity, which is already on the low side in Seattle. Seattle water is soft and should not require periodic descaling: Seattle water

The blue that you have there now can probably be scrubbed clean with a green scrubby. It might be informative to scrape some of the blue stuff into a cup and see if it dissolves after an hour or two in pure white vinegar. If it doesn't dissolve you have something other than carbonate, which typical descaling would not remove.

In the old days people generally believed in the idea of 'protective scale' that you would periodically remove with descaling. Nowadays you see a lot more advice that recommends non-scaling water with good alkalinity and avoiding the need to descale altogether.
Pat
nínádiishʼnahgo gohwééh náshdlį́į́h
Top
← Back
By accessing this site, you agree to the site's terms of service. If you need help with the site, please contact us.