Remove the horizontal panel just behind the drip tray and thus expose the three-way valve. Put your finger over the lower discharge port of this valve during this "muted whistling" experience. Does the sound go away?
Skål,

Here is the video:
Top

Yes, but in the 35-45 second time period where you were placing your fingers over the solenoid valve discharge "tube", the sound sure did change to my ears.
Skål,

No it didn't. You will notice that just before that, the boiler went off, causing the sound to stop.
Top

I had a similar issue with my V3 Silvia. About 1 min into the heating cycle, only when it was cold, it would whistle for about 20 sec. It was an open box purchase, with a warranty, so I took it back, and their repair tech had replaced that large brass elbow piece (Marked with the big red arrow below).

I can't say for sure if my issue is related to yours, but hopefully it will help! Good luck! 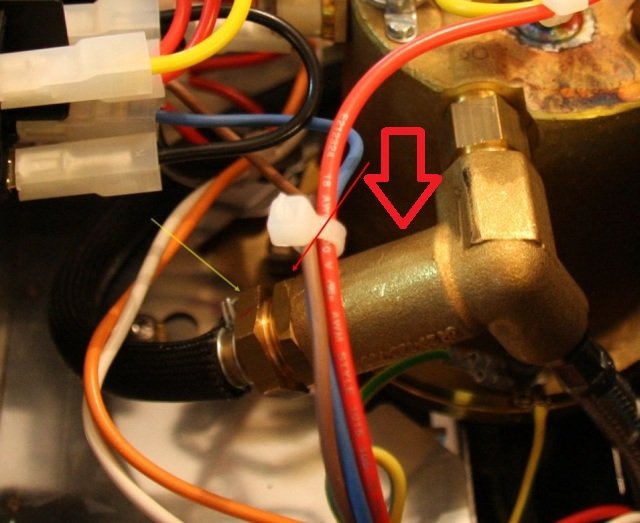 Ok, so maybe just opening it to clean it would do ! I will have to check my brew pressure at first, to set it back.
Top

It should be easy to isolate. Use a 1/2 to 3/4" wood dowel about 18" long (equivalent in solid plastic would be better). Round off one end. Hold that in your ear and place the other end on various parts (in the auto repair trade we use to use a long screwdriver with a "ball" end on the handle. That would work better, but I hesitate telling anyone to put a metal tool into an electrical device that is charged).

The sound is definitely some sort of harmonic as it changes frequency, and in some of the samples there were two simultaneous tones. Maybe pinch off the return overflow hose about 1" from the outlet of the OPV and see if that changes anything - just as a test.
Espresso! My Espresso! - http://www.EspressoMyEspresso.com
LMWDP #644
Top

Thanks for the tip Andy, I'll try it for sure.

As for the sound, you are right. It really sounds like a reasoning sound and at some point it sounds like an organ chord (that sounds surprisingly good!). It's hard to tell where it comes from. Your tip will surely helps. To me it sounds like the bubbles from the boiling water produce this sound (when there are a lot of them) by raising through the heating element but I cannot explain why there was no sound prior to descaling. Other than that, the machine works very well and pulls good shots.

No problem, please let us know what you find!

An update on my issue, I am starting to hear the sound again, however it is at the end of the boiler cycle now, so it does seem to be very similar to your issue now. I will let you know what I find as well.

Also, here is a good thread I found on Troubleshooting/Disassembling the Silvia:

Good Luck!
Top
← Back •
By accessing this site, you agree to the site's terms of service. If you need help with the site, please contact us.