Larry B wrote:I have an Expobar Office Lever that has a mushroom with a removable top piece and a tubular filter screen in it. I was hoping someone could tell me if the one piece stainless steel mushroom would work in its place.

My Rocket Giotto Evo V2 also has that standard E-61 design. Looks like this:

They told me at CCS that their stainless version should work fine for me, although they could not guarantee that I could use my existing gicleur in the new mushroom. I ordered one and will know for sure soon.

The new stainless ones have an upper cap that can be removed from the lower mushroom, so is not really one piece. Here's a post related to that design: How to unscrew E61 stainless steel mushroom?


mammamia wrote:Also curios about Rocket's policy on using brittle ceramic mushroom now. New Mozaffiato, and Giotto use ceramic or whole metal one? Thanks.

The online Rocket parts site still only shows the ceramic mushroom, but rumor has it that they have discontinued using it in new machines: Broken E61 grouphead mushroom!
Pat
nínádiishʼnahgo gohwééh náshdlį́į́h
Top

Yes, that's exactly what I have.
Thanks for the info!
Can you keep me posted as to how your new mushroom works out for you?
Thanks Again

Way to go, homeburrero!
Plz let us know about it. I would be happy to know if I could pull myself from worrying about mushroom brokerage.

'Ceramic mushrooms eliminate scale build up and associated deterioration extending the life of the group.' It could be true until the mushroom get broken.
https://shop.rocket-espresso.com/produc ... group-head


Larry B wrote:No, haven't received any response. I have an Expobar Office Lever that has a mushroom with a removable top piece and a tubular filter screen in it. I was hoping someone could tell me if the one piece stainless steel mushroom would work in its place. Tired of having the chrome plating peeling off after a few months and ending up in my coffee.
I understand that Profitec and ECM are using them now.

Good for us to know that homeburrero would try it soon.

Reporting back now that I got the new stainless mushroom from CCS and have it working in my Rocket Giotto V2.

I'm told it's the same mushroom that you'd get in some of the newest Izzo machines.

Here's what it looks like next to the standard plated brass rocket mushroom: 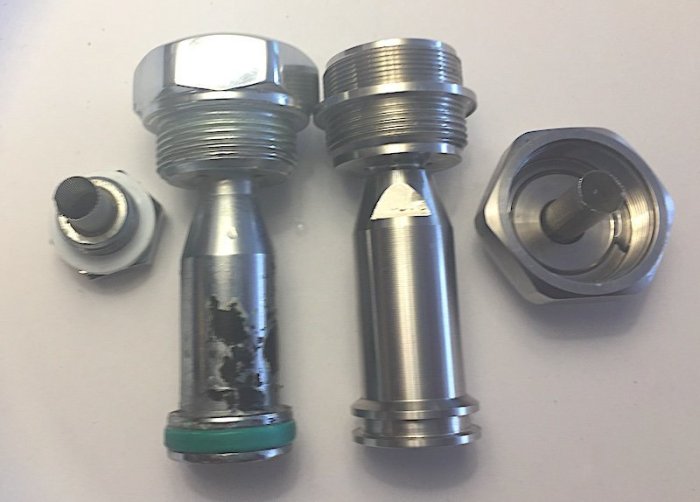 Dimensions for the length of the lower sleeve, o-ring groove size**, depth of sleeve to spring seat, filter screen size are identical. The new one, being of stainless, is a little lighter (246g rather than 270g.) Note that the bottom sleeve is of a piece with the upper part, just like the old one - it doesn't unscrew like the ECM one (see below for a pic of that one ) . The cap takes the same 36mm wrench as the large nut of the old mushroom

** Edit: I thought it was the same, but when I tried again using my thick green Rocket o-ring instead of one from a rebuild kit I had difficulty getting the mushroom threaded into the group. So I remeasured carefully and the diameter where the oring sits is about 21.5 in the new mushroom but was only 20.4 mm in my Evo V2. I checked my older ECM Giotto, and it was 21.5, so I think the Evo V2 (that came with the green o-ring) may be the odd man out here. I think this is an area where E61 is not perfectly generic -- note that Stefano includes both a thin and thick o-ring in his E61 rebuild kits.

The gicleur is stainless and is removed using the same 7mm socket or nut driver that is used to remove the old one. It also has the same M6 threading and the two can be easily interchanged. 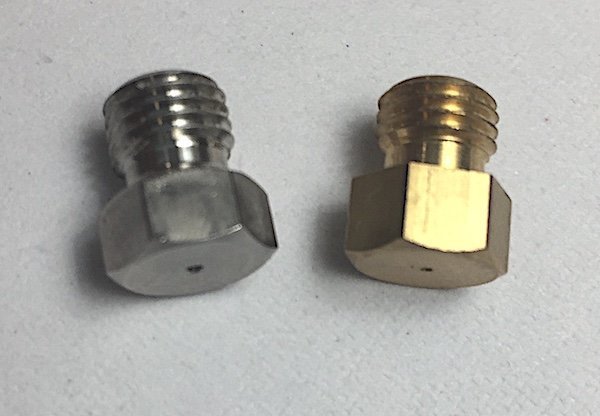 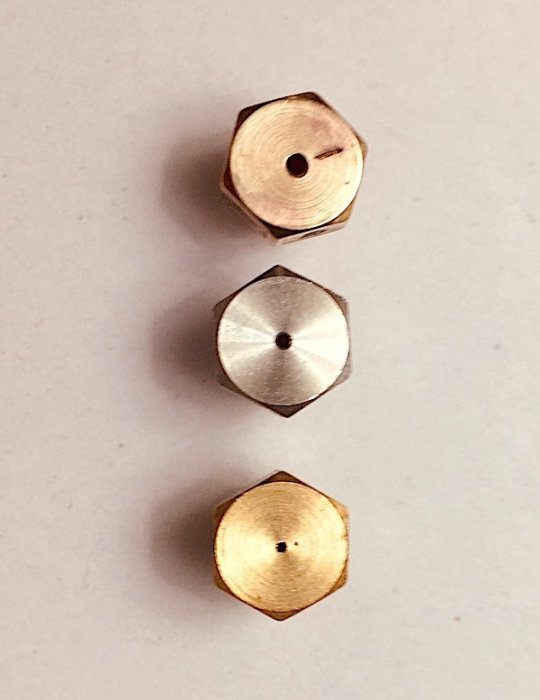 A big difference with this is that to remove the mushroom from the group you first unscrew the cap with the 36mm wrench, and one of two things can happen. Ideally the mushroom unscrews along with the cap, but the cap might unscrew from the mushroom body. If that happens you'll need a monster 14mm hex (allen) wrench to get the mushroom out. Here's what the top with removed cap looks like: 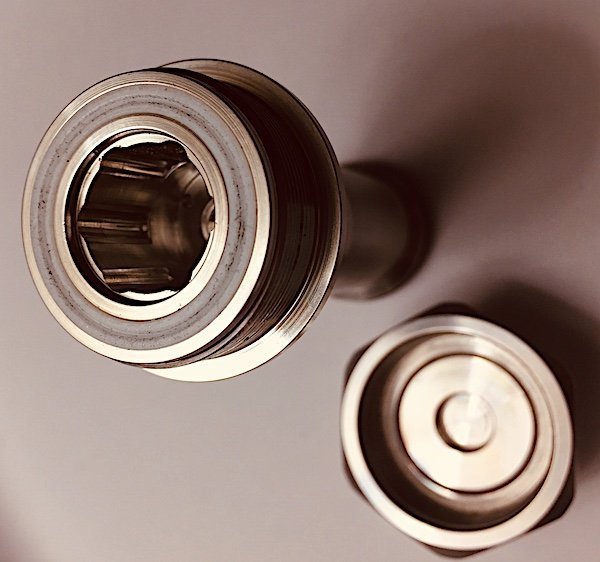 The cap has a recess for the gicleur screen, and has a ridge that seals against a teflon washer that's in a recess at the top of the mushroom. That teflon washer is one part that you won't get in a standard E61 rebuild kit.

To tighten the cap against the mushroom body you just put a 16mm wrench on the flats near the top of the mushroom sleeve and crank the 36mm capnut tight. I think if you get this good and tight you have a better chance of the mushroom coming out with the capnut when servicing the group.

Note: The ECM stainless mushroom is different. The bottom sleeve threads into the top body as seen in this picture: 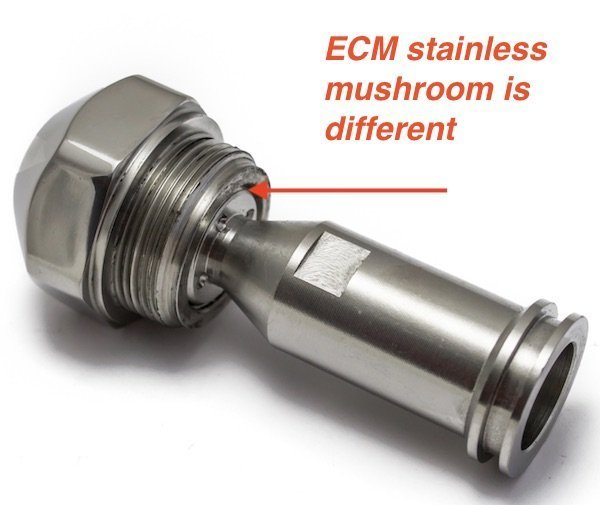 homeburrero wrote:Reporting back now that I got the new stainless mushroom from CCS and have it working in my Rocket Giotto V2.

This is one of darn good reports! Notes of possible O-ring size difference, Stefano's E61 rebuild kit, gicleur size, new cap design and possible necessary of 14mm hex key are priceless information to people like me interested in replacing old mushroom or Rocket ceremic one into new stainless one in future.
I appreciate it, homeburrero. May the force be with you.
Top
← Back •
By accessing this site, you agree to the site's terms of service. If you need help with the site, please contact us.