Hello everyone,
I am relatively new to the home espresso scene. Not too long ago I took a plunge and invested in a Rocket Giotto Premium Plus with PID. Over the past several weeks I took to learning the basics. Coffee was good. However, recently the machine has begun to make a high pitched vibrating noise when pulling shots. The noise usually occurs around 8 bars of pressure. Although troubling, the noise does not seem to accompany any functionality issues (to my knowledge). The machine still makes great espresso. The new onset of the horrible sound is quite worrisome considering the hefty price tag.

Im not sure where to begin with troubleshooting. I have not seen anything related to this issue in my research. Any advice is more than welcome.

Here are a few videos of the noise. One pulling a standard shot, and another with a blind basket / back-flush. I would like to note that I am exceedingly thorough with keeping the machine clean. I back-flush daily and use machine appropriate detergent on a weekly/biweekly basis. I also only use filtered tap water and utilize the Rocket water reservoir filter to avoid scale buildup.

Thanks everyone for your input!

I have a Rocket Giotto V2 and I have experienced that very same sound at least twice in 4 years. A new pump has always been the answer to eliminating the issue. Like you, even though I had that annoying sound the machine would work perfectly. I am pretty sure the machine would have continued working fine with the pump that was causing the sound, but since the ULKA pumps are so cheap I just replaced it. I'd suggest you get a new pump even if you keep using the old one. In the event that the original pump dies then you have a spare.
Top

Peculiar.
Would the pump still be a likely culprit on such a new machine (less than one month of use)?

Thank you for your input! That is actually very helpful.
Any particular suggestion on where to look/refer to concerning purchasing the part and the steps to physically replace the mechanism?

Vibe pumps by nature can result in resonance in connected or touching parts. I've heard this noise when I had a vibe pump. Have a fiddle with the OPV, you could do with increasing it a bit for 10 to 11 bar at the blind anyway. This could fix it. Also check that the pump isn't touching anything. You may well be able to hear where exactly the noise is coming from with the lid off. Be sure to unplug the machine before removing panels
Top

Had the similar noise on an expobar, unscrewed and lubed the opv valve gasket and sound went away.
Top

I agree that this is most likely the OPV. To confirm try running with the blind filter in place and adjust the OPV by turning the screw.
My Expobar also made this noise, however only when I was adjusting the pressure via the OPV.
Top

Thanks everyone.
I will definitely investigate how to adjust the pressure valve.
If that's not the case perhaps the pump is the offender and needs replacing.

I will update soon.
Thanks again.
Top

My Giotto V2 has 2 OPVs. A big one that looks like most OPVs and a slim one with a ball valve(on/off) which is the one supposed to be adjusted to the desired brew pressure. The other(big) OPV is supposed to be set to +11bar and functions just like an expansion valve in a rotary pump machine. As far as know Rocket machines with vibe pumps V2 and higher have this system. Why did Rocket add this to the hydraulic system for vibe pumps? I have no idea.
Top

I was easily able to remove the back panel and found what I believe to be the OPV (pictures below).
Upon turning it clockwise I adjusted the pressure util the indicator moved from 9 bars to approximately 9.75 bars.
The troubling noise stopped!

I tested and everything seems to be running normally. I will upload a video later to compare sounds for anyone interested.

Here are my next questions:
Why would marginally increasing the OPV have an effect on the high pitch vibration? Any technical explanation would be great. The problem appears to be resolved, but I would love to understand why.

Additionally. I adjusted the pressure by turning the nut (pointed to in picture). Any idea what the red valve to the left does? 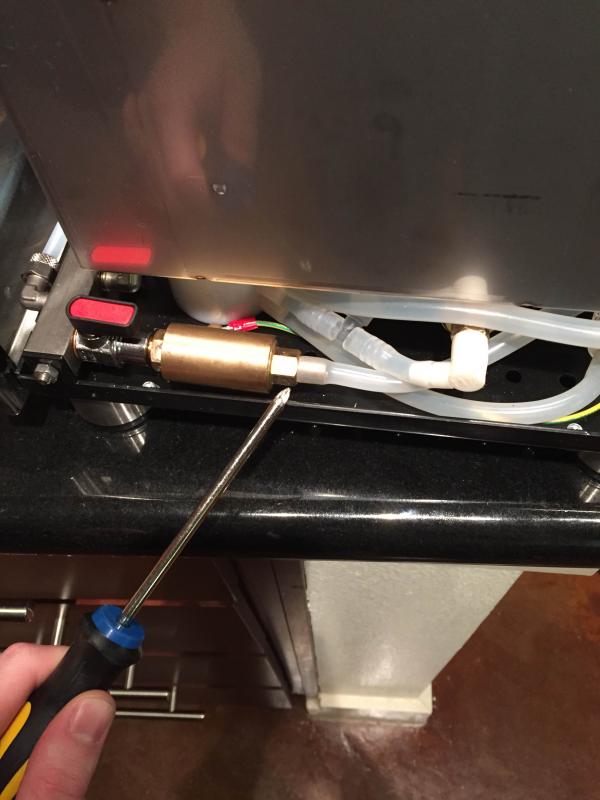 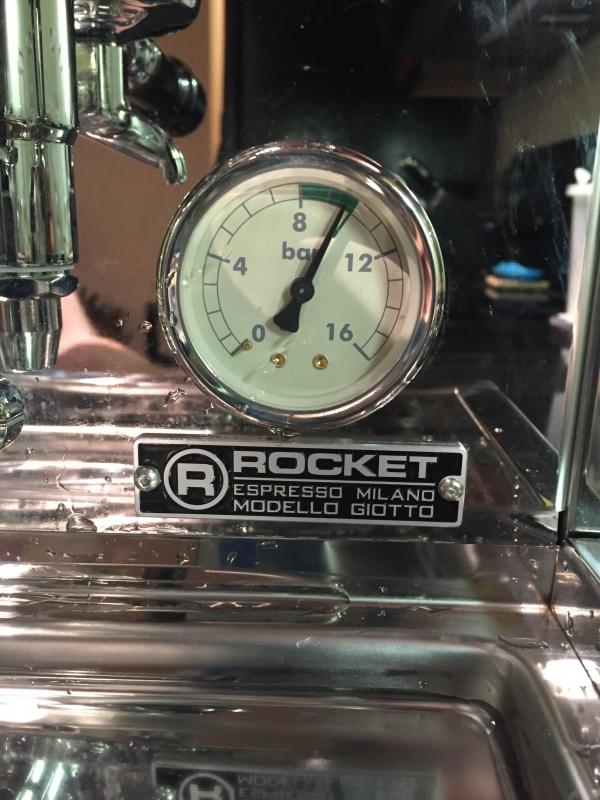 "A big one that looks like most OPVs and a slim one with a ball valve(on/off) which is the one supposed to be adjusted to the desired brew pressure"
Thank you for that clarification. Initially I was confused when visualizing both valves. They look extremely similar!


Thanks again everyone
Top

Video for sound comparison.
In person there is a stark contrast. Much quieter and back to how it sounded out of the box.

https://youtu.be/LlLXK1LDRrc
Top
← Back •
By accessing this site, you agree to the site's terms of service. If you need help with the site, please contact us.